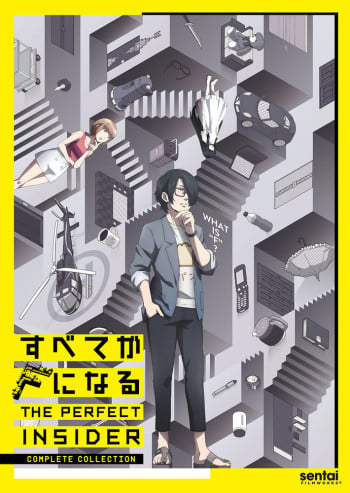 There's a murder and main characters try to solve the mystery behind it. Lots of questions, tensity, dark world atmosphere, similar animation.

Perfect Insider and Erased are very much alike and enough that, the first show I thought about that was similar to Perfect Insider after watching a few episodes was Erased. Both shows center around murder and a serial killer and the incidents trace back to the past of 10 or more years back.

Both are pretty intense and dark at times, both have pretty interesting reveals (the perfect insider more so than erased, although Erased as a whole is better), and they both are a little underwhelimg at the very end.

They both contain a romance element that isn't the main point of the story, and they both have secret, twisted villains.

Both are slow-paced, exposition-heavy mystery shows which follow the investigation of a gruesome murder case. Fans of one should like the other.

These two animes complement each other perfectly. The main character fully empathizes with the logic of the culprit and this is what helps them to understand the reasons behind the murder. The body in this stories is also presented as a woman without her limbs, who wants to dissapear from her reality and has a forbidden love, with the aesthetic of a yamato nadeshiko (long dark hair, pale skin, almost like a doll).

Both have elements of mystery, crime, suspense and psychology. The overall feeling of both series is rather dark. While PsychoPass takes the fururistic approach, Subety ga F ni Naru has a more realistic setting while focusing on the darker sides of human nature.

Both try to explain the murders that take place in the story from a neutral and heavily psycological point of view, avoiding the good-bad implications. The main character is able to abstract him/herself from the murders and how they are commited.

Similar world atmosphere, great detail and animation. Both includes a mystery and people who try to solve it,  smart main characters

Both anime have some psychology in it and are a bit avangard-ish.Trying to solve the mystery, dialogues with double meanings.  A bit of esoterics and different world view.

Main characters are really smart.  There's a murder, solving the mystery, loss of humanity and the dark world atmosphere.

A re-telling of the original 2013 anime series, recounting the events surrounding bespectacled beauty Mirai Kuriyama and an immortal, half-human boy named Akihito Kanbara. As a Spirit World warrior, Mirai uses the rare gift (and curse) that is using her blood as a weapon to slay supernatural monsters known as youmu.

The story is mainly about a few people, a bit of romance, love, drama and action. Main character is a young girl who keeps trying to help or be the only one for the guy she admires

The story is mainly about a few people, a bit of romance, love, drama and action. Main character is a young girl who keeps trying to help or be the only one for the guy she admires