The Ones Within - Reviews 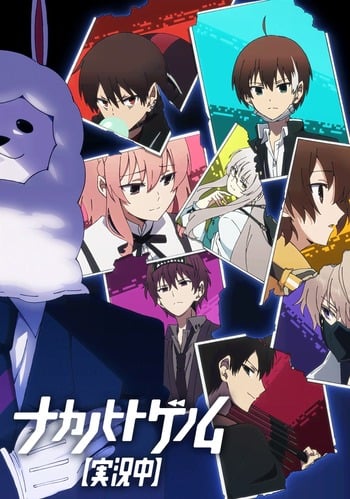 Let me just start by saying the synopsis and tags are extremely misleading. From that you'd probably expect something like Btooom or Danganrompa or Death Parade even. You'd probably expect death, violence, dark themes, a fight for one's life, sinister characters, and bloodshed. Yeah... you won't get that with this. Luckily I read hulu's description first which is slightly less misleading.

It's not that the tags and description are wrong exactly. They are technically correct. There are mentions of high stakes and the posibility of death throughout the episodes but you quickly learn these threats are empty and nothing of the sort comes close to happening. The challenges aren't that high risk despite being made out to be and a broken arm and collapsing from poor self care are about the worst things that happen to anyone. So yeah, not really a high stakes survival anime, as much as it tries to talk like one sometimes.

Story: It's not well fleshed out or explained at any point but, from what I could gather, a group of gaming streamers are brought to an isolated location to participate in a real life game. (Whether this is on the "real earth", a fantasy world, or inside a computer is a bit unclear). Each character has a game genre they specialize in. The players must complete various tasks and reach a hundred million views to be freed. If you break the rules or act out, you could be placed in a white room for eternity supposedly.

Each task has the threat of death, serious injury, or becoming a drop out (not being able to finish and being sentenced to a room forever) attached to it but, like I said, it's empty threats. Nothing ever comes of them so it doesn't have the feel of being high stakes, just the claim. Most of the characters don't have weapons or their weapon is something like a flash bomb.. not very deadly. Most of the tasks don't include fighting of any kind and there's always a fairly easy way to avoid big problems either through the design of the game or the knowledge a character poseses.

The world building in the show isn't that great either. We never get a lot of details. Even a very vague idea of where the characters are doesn't happen until ep 9 and it stays vague. There's not much on the game that these people supposedly played, why they are here, where they are, or anything else. Like I said, I couldn't even tell you if they were in fantasy land or inside a computer or maybe just a very weird earth. Not a clue. There's just not enough information given to make it a solid world or story so the experience isn't that great.

What information is given usually has no significant bearing on the plot or mystery either, from what's been seen so far. Perhaps if it gets a second season but I'm doubting it will. So we're just left with a lot of information to a mystery we never make any significant progress on.

Now it definitely seems like they are setting up for a second season and maybe that will make it a better anime. It could finally make use of all the random information and give us a real ending. I still think it needed more for a first season. It needed a better last episode and more pieces of the puzzle to create the world in the first season, but it could redeem itself with a second season if it manages to get one.

Overall, the plot is weak, even for a mystery getting a second season, it's weak. It feels half done. It doesn't give enough information for a strong background or idea. That's not to say I hate it. I enjoyed it more than my score probably reflects. But I wasn't enjoying it for the plot. The story is a giant mess and a 5 might even be being generous at this point.

Animation: Pretty standard. The designs aren't anything special and look like about 50 other animes but it's fine. It works. It's easy to look at. The color choices work, unless it's trying to be a dark high stakes game in which case they fail terribly at creating that atmosphere with the animation. But, if that wasn't the goal then it works. It keeps it light and has lots of cute characters to enjoy. That said, their are some effects that don't make a lot of sense and some scenes that felt lacking in continuity animation wise. Not sure why, but there were some moments where the animation felt very off.

Sound: Again, nothing very notable. I'm no expert though. The opening and ending felt appropriate. There were some points where it sounded like they just threw in some gaming background music and it added nothing. It didn't really harm the scenes but it didn't help them either. There was no point. But it was also almost unnoticeable unless you're picky so I don't see a reason to take much off for that.

Characters: The characters are fairly flat and predicatable. There's not a whole lot to any of them. I still find them enjoyable as they are but you're not going to find any masterfully created characters with multiple sides to them and complex personalities. One of them literally sleeps almost the whole time and only wakes up when it's useful for plot reasons. And he suddenly has whatever skill is needed to survive. Another is just hot headed all the time. Another is kind all the time. Everything is really basic and sterotypical.

They did try to add some darkness to most of the characters backgrounds. You get vague clips of trauma they went through or mentions of things they did or had happen to them but it doesn't have much effect on anything usually. Sometimes it sets off an event that amounts to not much. Sometimes it explains an article of clothing. Most of the time it could have been left out and would have had very little effect on the overall story. It feels like an attempt to flesh out the characters and the plot but you need more than a sob story from the past for that. It doesn't flesh them out.

Again, I enjoyed the characters for what they were. They made me laugh sometimes and they were kind of silly. But they aren't well written or anything so don't go in expecting something great.

Some things I did enjoy: Since a lot wasn't great but I still enjoyed the show, I figured I'd point out some things I DID like a lot. The alpaca man is great. He's the guy kind of running things and he's a funny character in a funny mask. It's almost worth watching just for his existence. I also enjoy the giant panda. Who doesn't enjoy a giant fluffy panda?

The overall ridiculousness of the games was kind of fun too and, since the plot was so weak, it didn't take a lot of brain energy to watch. It was simple. There were also a lot of creative twists to the games the characters played. The twists were enjoyable.

Also, one of the characters suffered from bad outdoor allergies and another from a sleep disorder. That was actually part of why I kept watching after the first ep or two because I liked that the characters had these. And they were often inconveinent and somewhat realistic. Not being able to sleep without medicine and suffering consequences from that. Sneezing at the worst moments. Yeah that's allergies and sleep disorders for you. It kind of got less attention as the show went on but the fact it was there and used at all was something I liked.

Overall: The plot, characters, and pacing are weak. This will never be some masterpiece. It hardly fits the atmosphere of a high stakes, mystery, survival anime either. But, it is fun. It has some enjoyable characters even if they aren't very developed. It has some fun scenes and twists. It's a good anime to pass the time with and you don't have to get super invested in it. I think shows like this have their own kind of value too. Just don't go into it with high expectations or thinking it will be like the typical show you'd find with these tages and descriptions. And enjoy it for what it is. Enjoy the alpaca man.

So, let me start out by saying that the synopsis of this show is not on point. I was expecting something else and sorta avoided this show because of it. But eventually, I saw the first EP just to try it.

Boy am I glad that I did xD

This show is, structurally, just like Dangaronpa. The actual playout is absolutely hilarious. I am laughing everywhere. The show has themes of horror, humor, mystery, and more. I have no idea how they pull it off, but this show has everything while still meshing really well. Best of all, the story isn't as simple as it appears...

If you have seen my other reviews, you will notice that I am quite critical. I honestly have not found anything I am upset with in this anime. It really is a treat to watch.

story
at first i thought it will be like dangaronpa that have typical dark mystery survival story. but apparently not it have some refreshing and light story have some comedy
and interesting mystery in it. it shows flashback & some background story of the characters make it more interesting to watch or read.
the story is well laid out and structured, supported by good animation.

character
cute, handsome, beauty char with variety personalities that not make u bored but make u laugh with their behaviour.
and dont forget their oufit's very well out and suitable their personality :D

sound
i think the sound was okay, but i think they can choose more charismatic seiyuu for male char

animation
i think it good but i have complain for the studio, bc it makes this animation like persona with coloring and stuff i hate it.
and they chop some story different from manga. u know, the manga was perfect why u change it :<
i hope they don't make some drastic difference between manga and anime. i hate it when good dialog chopped or 1 panel in manga that make story compelete/full was not there in anime.
why some good manga messed up when it come to anime.

I'm not really sure if it will get another season but I really hope it does, I wish they told us more about the character's backstory, but it was enough

the ending confused me though, I do only watch anime and rarely read the manga, they say there is a clearer explanation in the manga so I might just have to read it orrrr wait for another season ( hopefully )

overall it's a great anime and Its certainly up there with my favourites!

You definitely have to watch this for the alpaca. I just find him creepy but interesting.

Aside from paca there are quite some episodes that are funny/interesting/intriguing.

The story is underdeveloped? like we get hints but it's a little confusing.