The Mysterious Cities of Gold 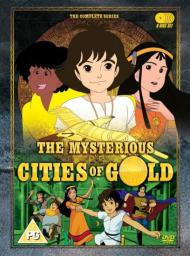 In the sixteenth century, Esteban is a Spanish orphan who travels the seas with Mendoza - the man who saved him from dying in the midst of a storm, when Esteban was just a child. With Esteban in tow, Mendoza has set forth to the new world in search of the Mysterious Cities of Gold and riches beyond his wildest dreams - but all Esteban really wants is to search for the location of his father. The duo is also joined by the Incan girl Zia, as only she can translate the writings that will help lead them to the treasure. Mendoza, while seemingly caring, has ambiguous motives; though the intentions of Commander Gomez and Captain Gaspard are clear: find all of the gold that they can, and step on anyone that gets in their way...

Yet another animated series I watched as a kid and had no idea it was to the most part made by Japanese people. Then again, it was so good to be made by any other country so that pretty much explains it. Technically, The Mysterious Cities of Gold (TMCOG) was the One Piece of anime back in the early 80’s. It is a children’s adventure regarding seeking treasure, discovering ancient civilizations, uncovering secrets, and occasionally using relics to fight their way through various challenges and opponents. It is partially based on actual history, the age of exploration during the charting of America, and even has live-action documentary segments in the end of each episode that teach the children to the basic events that took place at that era. Thus it entertaining and educational at the same time, two elements that usually conflict with each other when it comes to animated shows. I sort of see it as a great combination of a historical documentary such as the journeys of Christopher Columbus with a classic fictional adventure full of action and suspense, such as Treasure Island. Although there actually are anime made about both those titles around the same time, none were as captivating as TMCOG because they both felt too basic. Despite its age, the production values are not bad at all. Although the character figures look rather simply drawn and have minimal shading on them, their motions are usually very dynamic in terms of performance (not frames per second) so your eyes are kept busy looking at something all the time. I am even willing to say most modern anime shows have far less things going on in each scene compared to this oldie, thus tend to be far easier to be bored if all you look at is frozen caricatures with a flapping mouth. Also, since none of the characters has superpowers you are guaranteed an interesting event no matter how simple it may appear to be. Steering a ship or climbing a mountain tends to be a dangerous task and the series takes its time to show how they need to organize in order to do it right. Whole episodes are spent in just having the characters sailing or walking, while at the same time flavouring them as personalities and making the simplest thing they do to appear hard, dangerous, and meaningful. Sadly, the above doesn’t stand true all the way and in the second half there is way too much super technology going around to water-down the feeling of adventure. The characters will simply use their medallions to unlock gates nobody else can or fly with an airplane (made in ancient times!) to complete any task in a few seconds. They make it seem so simple and rushed, it loses its initial importance. Regarding the sound part, I never watched the series in the original Japanese or French dub; just in Greek as a kid and in English as an adult. In both cases I can’t say they were very impressive. In fact, I could say they felt very colourless, childish and simple but then again it is a show aimed at children so no worries here. The music themes are very nifty and they tend to be very memorable. They have tunes that make them sound like they are from native Central America and the lyrics are full of adventure-inspiring words; so I say they are successful at what they set out to do. The story is simply amazing if you see it as a whole. It combines both historical facts, has lots of adventure and mystery, has lots of character interaction, has lots of excitement and above all HAS ALMOST NO FILLERS! The main three heroes are kids who seek to find something important in the Incan ruins (each one has different goals though) and are supported by a crew of explorers who simply want to find gold and get rich. So there is variety in the motivations of its characters, something which usually leads to internal conflicts. The themes are also changing from time to time so you are again not getting the same atmosphere in all the episodes. Some of them can be about adventure, others about pacifism, others about greed, and so on. Some of them event have science fiction in them which may feel out of context a bit (makes the Incas to appear like they had 20th century technology) but I guess it is excused in a children’s adventure and since we already have all those weird Nazka theories. What may feel tiresome is how the action is almost always very basic and any conflict is resolved in a rather cop-out manner. It tends to get boring if you are sure the heroes will find a way to get out of any danger without ever getting hurt. Also, some parts will feel unnecessary long and the payback will be just something you knew all along that would happen. But as I said, waiting for those live action segments just to see how all that fit in the story was keeping me interested no matter what was happening. The characters will feel rather basic and stereotypical but they definitely get some sort of development along the way and everybody is given enough focus for you to know and like. Although they are all very simple as personalities and act rather cartoony (extreme personal quirks or traits), they are all a colourful bunch and I liked them for what they are. We get the usual high-spirited kids, the greedy adventurers, the stupid megalomaniac villains, the vengeful natives, but thanks to the variable themes of the story, they definitely manage to grow on you.It is without doubt one of the best animated retro adventures of all times and I recommend it to everyone who wants some good old fashion excitement regarding treasure hunting and exploration.