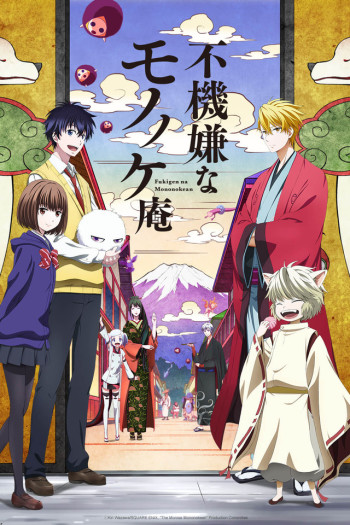 This anime isn't anything special. I guess the first couple of episodes are interesting as they introduce the two main characters and give the context in which the story should unfold. Except it doesn't. There is no story. Just one episode after another of the same thing that gets repeated and doesn't lead anywhere. There is also no character development. So why bother?

Hanae is a student who gets possessed on his very first day of high school by a youkai. He's desperate to get rid of it because it seems to rob him of all of his energy and vitality. So when he meets Abeno who as a profession exorcises youkai, he asks him to help. Abeno exorcises the youkai, but then expects Hanae to work part-time for him to repay his debt. It's a youkai-of-the-week format as our two main protagonists encounter a different youkai each episode and assist it in reaching the underworld.

I initially said the first couple of episodes were interesting because they outline the relationship between Abeno and Hanae as they get to know each other. But after a sort of friendship and trust is established - there is no further development.

So there you have it. It's not terrible, but I really don't see why anyone should watch this. There's no plot worth mentioning, the characters are likeable but not so original or peculiar as to get you hooked on the anime, the relationship between the two reminded me of the typical romance-anime one between a cool tsundere and their naive, clumsy, affectionate and overly enthusiastic counterpart - except it's not a romance anime. And, lastly, if you like anime about youkai and japanese folklore there are more captivating ones like xxxholic, mushishi or mononoke.

This was a really cute series. Sure, it wasn’t the most original thing, there are certainly plenty of series out there with a similar plot, but that didn’t make it any less enjoyable.

The story involves Hanae, who’s just moved into high school becoming able to see youkai when a fluffy white one begins possessing him. The longer it stays with him, the weaker he becomes, until he comes into contact with an exorcist, Haruitsuki. He agrees to exorcise the youkai, but in return, Hanae must work for him to help exorcise youkai. I did warn you that it’s not the original plot.

The characters themselves aren’t too original either. Hanae, the extremely energetic and kind teenager, Haruitsuki, the closed off and lonely one; it’s nothing that hasn’t been done already.

So, why the high score, you ask? Does a series really need to be original to be enjoyable? The story was still solid, the characters still likeable, and the use of Japanese mythology still as interesting as ever. Sure, if you’ve just come from watching a load of similar anime I probably wouldn’t recommend watching this straight away, but if you like this sort of thing it is still a great anime.

First of all, this anime is UNFINISHED. As it stands, it's essentially a giant teaser for the manga.

Ashiya is about as stereotypical a main character as one can get, and Abeno his friend/master isn't much better. Their chipper/dour dynamic is tired, and you've seen it before. Often. In fact, I feel that a majority of the appeal of this show is counting on fangirls being able to ship them together, because there isn't much else going for either of them aside from the possibility they might boink.

There are a few underlying plot elements that are mentioned but never examined again, likely due to it only being one season. Even the designs of the main characters and the yokai they encounter feel uninspired. And you know, after 13 episodes, I still don't understand why a Mononoke master has to go to high school, when he constantly tells his pupil to stay away from humans! I would say the only thing I enjoyed about this at all was the animation, but a majority of anime coming out these days look great, so that's almost a moot point.

If this was made to see if it would do well before continuing, I can see why no more seasons were produced. It isn't the best example of its genre, nor even a slightly memorable one. Because it's more or less a sample of the source material, none of the characters have enough time to develop, and in all honesty even if they did, I find it difficult to believe you would care much. I certainly didn't. It's your typical episodic yokai anime with polish, but no substance. Skip it and go for Mononoke TV or Natsume Yuujinchou, which are far better and more interesting productions.

[Review based on: First Anime Season Only]

It made me really itchy, and then never scratched a single one of the itches.

There wasn't much development in any of the characters.

Several characters regularly made decisions that seemed out of character, overreactive, unrealistic. I found 60% of the side characters/clients annoying and wished to not see them anymore.

I was hopeful for Ashiya at first: I thought he'd be the chaotic airhead type that appears incompetent but is actually competent where it counts, and/or makes up for it by bringing a unique emotional talent. But no, not really.

I was also hopeful for Itsuki, but he didn't have much development nor character exploration after the first few episodes.

I liked Zenko and her total disregard for her dad's overprotectiveness.

Moja and Mononokean were on a whole different tier though. They were both fantastic.

There was basically no subtext.

Half of the stories seemed to be stretched out time-wise beyond what they were meant to support. A lot of the conflict was completely avoidable. And the really sad thing is, there were a lot of opportunities for true and interesting conflict... which didn't get explored.

The comedy was mostly a miss for me. I think Ashiya's voice actor made some of the lines pretty great though.

There were some plot points that looked mildly interesting, but after introducing them, they weren't followed up on. (I'm guessing that's developed more in the later volumes of the manga, though.)

The in-episode soundtracks didn't seem to support the scene moods very well, but the opening and ending songs were both good.

I liked the art, especially in the underworld.

Overall, I appreciate the idea behind it, but don't think it was executed very well, and didn't enjoy it very much.

I don't plan to watch the second season, but it still had a few cool things going for it, so I might give the manga a try at some point.

I love this anime so much ! You all should watch it !