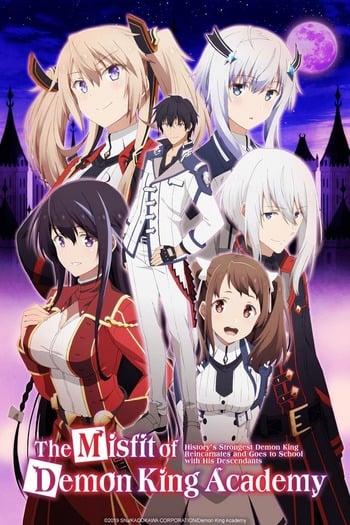 If you're looking for manga similar to The Misfit of Demon King Academy, you might like these titles.

Morioka Yuuto was an ordinary highschooler who was chosen as a candidate for the next Demon Lord. Thus, he was transferred to a Demon’s school, Ginsei Academy where he faced contempt from the other students. “—I’ll make you into the Demon Lord. So…… take me.” Through an encounter with the Demon beauty, Himekami Rizel, Yuuto’s life changed, along with the world. In addition to being able to learn any magic at one glance, he can also infinitely absorb the mana of his harem by maintaining skin contact. This was the special ability which can only be held the human Yuuto. The human Demon Lord candidate aims to become a just Demon Lord and stand against the strongest Demons!

I Picked up a Demon Lord as a Maid

If the big breasted demon queen was reduced to a slave, what would you do to her? Would you kill her and become humanity’s greatest hero? Or would you enslave her and enjoy the highest level of pleasure in the world? No, he doesn’t want any of that, Lin Xiao just wanted to be an unremarkable reserve hero. Black stocking long leg princess, two-faced loli saint… no one can tempt him to change his majestic ideals of eating and waiting for death! That’s why his answer was — “Demon Queen, can you quickly put on your clothes and scram on out of here?”

A boy named Allen who was called not to be able to get the gift of God's bounty.But his true identity was a former hero with memories and powers of previous life!? Fortunately to have been expelled from his duke's family, Allen was trying to start a free-spirited journey, but he would encounter an assassination attempt by a former fiance ...! ?

A mid-rank soldier died at the very end of the war against the Demon Race. Fortunately for him, he wakes up to find that he’s a baby again, in the embrace of his real mother, years in the past. Determined to avoid the chain of tragedies that took his beloved ones away from him, he takes advantage of the advancements in swordsmanship and magic that developed during the war and tries his best to prepare for the demon invasion as well as strengthen himself with maximum efficiency.