The Master of Ragnarok & Blesser of Einherjar - Reviews 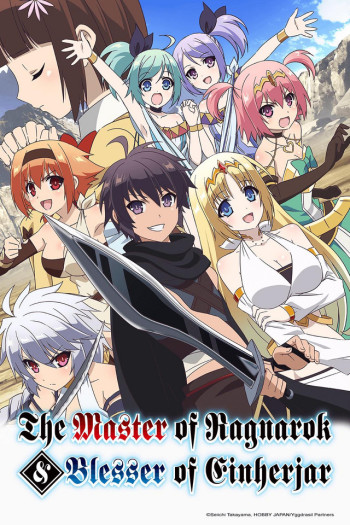 I didn't have high expectations, I just wanted to watch something that may be funny with possibly a little action. What I got was dumped into the middle of the story, somewhere after all the major character development should have taken place, and then dumped at the end with no real conclusion to anything. Just like a trailer. Except it was 12 episodes long. I still feel like the show might be entertaining. If they'd only let us see the actual story with a proper beginning and ending. What plot there was, was easily predicted by reading the description.
My recommendation is to read the description, watch the trailer, and peruse the character list. After that, you will gotten as much out this anime as everyone else who watched it for 6 hours.

Actually garbage, YOU’RE NOT BATMAN, KILL YOUR ENEMIES FOR ONCE. I only put 1s for the story and characters because you can’t put a Zero.

The Master of Ragnarok and Blesser of Einherjar is a truly humiliating work. It’s so comically inept and earnest in the name of its intended ambitions and atrocities that it becomes endearingly pathetic for a while. I was wholly prepared to come write about how this show was the ultimate waste of time in terms of creating it, watching it, and especially reviewing it. It still is in many ways, especially when it becomes downright insufferable later on, but this deformed gem belongs in the same realm as classics such as Big Order and The Room. I mean, just look at this thing, this clueless, fugly piece of shit!

This show is the penultimate production shitshow! To begin with the easiest of targets, the CGI is as prevalent as it is laughable. The stills are more frequent than bits of animation, resulting in some garbage action and hentai-like sequences. The animated fight sequences aren’t much better, so it’s nigh impossible to appreciate the “action” on any level.. As if all that wasn't enough, the people at studio EMT² created this terrible Ufotable-esque art-style similar to the infamous Chaos Dragon, and they struggled heavily to keep their character models consistently drawn. Shame cuz some of the women are so hot that they deserve much better, at least until you realize what utter objects they all are. That’s when it becomes debatable.

The female characters in this show are borderline humiliating, especially the twin additions to the harem. While they’re at the very least varied in terms of what kind of objects they are and even much of an object they’re characterized as -unlike in Smartphone- they’re still barely effective at best and downright worthless at worst. The best things I can say about them is that they don’t blatantly fall into any archetype and that some of their designs, namely Siegrune’s, are cool and have fun clothing. The later ones are so disastrously infuriating and worthless that after the pink-haired girl showed up, they should have stopped this process altogether and spent more time fleshing out we had. Their leader, Yuuto, is downright hysterical; he is a total piece of shit. Outside of the bitches he collects, patronizes, and still refuses to bone, and this one girlfriend he has at home (along with the few generals and whatnot who are useful), he treats everyone under his ranks with as much contempt as the most reprehensible regime leader villains in anime history. This man will force you to become his slave child or his barely any less subservient little sister, and threaten to massacre your clan if you don’t comply. His mistresses are all either his children or little sisters, which is obviously for the most unashamedly fetishistic sexual gratitude or both him and the intended audience. We’re supposed to treat him like a normal harem protagonist cuz he still has most of their hallmarks, or a decent human being just because he regrets having been worse? Fuck outta here! That’s like saying we’re supposed to pretend any of the remaining side-characters aren’t the most one-note and worthless things ever. Even he knows how awful he is, and some of it isn’t even his fault.

The fact that with all this, they still try to set up moments and entire plot-lines with intrigue, attempt to have character arcs with peak “emotional moments”, and take this show’s story seriously with emotional music and close-ups of women crying in joy or despair to boot, is as rich as it is tragic. It attempts all of that in the name of selling this kind of disastrously nonsensical, badly paced, convoluted, excess, and ill-defined material as something worth getting invested in. They even have several decent fantasy music for the title cards and scenes related to the ongoing war that are often only heard once. When Overlord is just sitting there, cackling in the corner with its superior OP/ED music in the same season this bullfuckery airs, things need to start being re-evaluated. In spite of all this, this show actually tries to indirectly explain the origins of this main character becoming an Isekai protagonist with a single moment of visual storytelling in the opening before eventually elaborating on it. Mad props for the idea, even if the end result was convoluted. For that alone, this thing ain’t as bad as Smartphone, let alone worthy of being called the worst Isekai ever made.

Obviously, the quest of enduring this embarrassment is not for everyone. Most of its problems are so self-evident that not only are several of them displayed by the title and cover art, but people not keen on wasting their time would be doing exactly that by watching this thing. This blend of ambition, degeneracy, laziness, and ineptitude is a beast meant for only the most skilled hate-watchers to slay. Even I barely survived half of what happened past the fifth episode, and I was having a blast early on and towards the end. For the brave few who choose to embark, and the animation buffs willing to give this a shot, grab a party. and/or alter your state of consciousness first. If you genuinely enjoy something like this, let nothing stop you other than some mind-shatteringly awful filler episodes. All others can pretend this show doesn’t exist; you’re missing nothing of value by doing so.

it doesnt have a begining the anime feels like you started watching it from the middle any flashbacks that occur are not very informative. there is very little explanation behind how the main character appeared in the world. the best way to describe this anime is that someone had an idea didnt write the beginning stretched the middle for 11 eps and rushed the ending into 1 ep.

i personally loved this anime. i am a sucker for person trapped in a strange world stories. what i loved most was reading between the lines in the story. to make the anime stand out, certian parts of the story were left out as puzzle pieces for the watcher to guess. i do not think the story was under developed, i believe it was developed with hard anime fans in mind, people who can read between the lines. a specific example is how they never show how he came to be in the world and another example is showing mitsuki and her earlier reincarnation look alike as summoning him to the world would be impossible without two strong magicians yet leefa was able to do it.. why? because mitsuki is also a strong magician. this anime was great overall and super underrated. loved the romance and harem too. not a fan of fan service. thx