The Legend of Hei - Recommendations 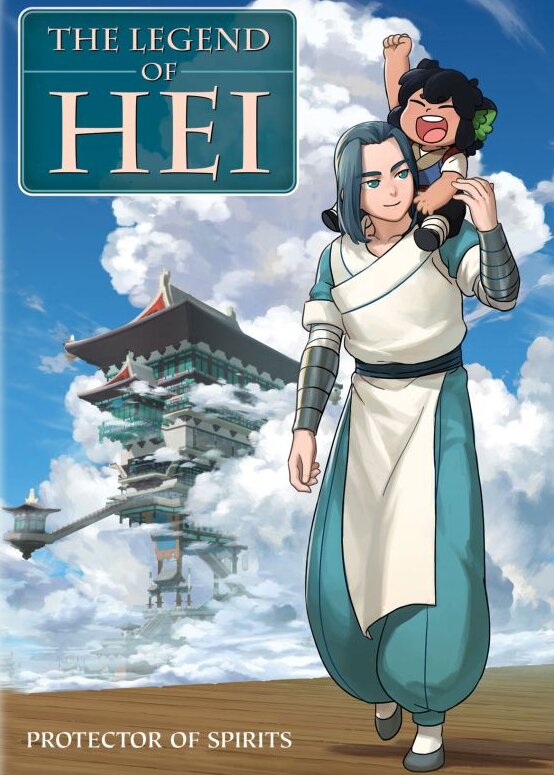 The Boy and the Beast

When Kyuuta, a young orphan living on the streets of Shibuya, stumbles into a fantastic world of beasts, he’s taken in by Kumatetsu, a gruff, rough-around-the-edges warrior beast who’s been searching for the perfect apprentice. Despite their constant bickering, Kyuuta and Kumatetsu begin training together and slowly form a bond as surrogate father and son. But when a deep darkness threatens to throw the human and beast worlds into chaos, the strong bond between this unlikely pair will be put to the ultimate test—a final showdown that will only be won if the two can finally work together using all of their combined strength and courage.

Both the series focus on the relationship between a kid and their mentor-guardian figure. Both the mentor and the kid grew with their interactions and become very close to each other.

two stories that tell about some sort of conflict in the world of spirits. central characters are mentor and his pupil, who don't get along at first, but develop mutual friendship as the story progresses. both combine tranquil natural sceneries and ghibli-esque vibe with martial arts action in urban setting.

despite obviously different age ratings, these two have nearly identical premise: as the humanity kept growing in numbers and expanding its domain, spirits were forced out of their homes. in modern days, some spirits try to peacefully coexist within the cities, the others harbor hatred towards humans. in both there's an organization founded by spirits themselves in order to preserve the balance. the central character is a human member of said organizetion, granted with supernatural powers, who ends up in a fierce battle against a group of powerful spirits wishing to take back what used to be theirs. both have amazing animation and directing of action scenes.

Both have human and non-human protagonist having a beautiful bond with each other like a teacher and student but also like a family and the non-human protagonists have cat forms and a similar vibe of youkai and fairies existing in the world with the mix of fantasy and reality,both gives off a peaceful feelings but has interesting stories to unfold with climax.

In order to marry Ouyang, the daughter of the master of martial arts, Siwen commissioned the Time Photo Studio to help him crack the master's unique martial arts.

Toriyasu is an extremely cynical young boy who doesn't believe in anything out of the ordinary. His younger sister Miiko, on the other hand, is the complete opposite and is convinced that the disappearance of their dog, Papadoll, is due to an alien abduction. Late one night three strange cats appear in the siblings' room and whisk the pair off to Banipal Witt, a bizarre world entirely inhabited by cats. As if a land that exists atop a giant sleeping cat wasn't odd enough, the moment they step onto the ground Toriyasu and Miiko are transformed into cats themselves! They soon learn that Papadoll has been captured by the spoiled and cursed Princess Buburina and is being used to wreak havoc. Toriyasu is skeptical at first, but when Miiko is taken hostage, he decides to cooperate with the cats to stop Lady Buburina, and rescue Miiko and Papadoll before the next sunrise!

After graduating, the poor Duan Jiaze inherited a private zoo. He signed a contract and welcomed Luya, Daji, Bai Suzhen, black bear, and other “animals”. Since then, he was so worried that he has been dreaming about customer traffic. Since then, the first zoo to implement a classification system has appeared, anyone under 21 years old cannot visit Luya. Since then, demons, ghosts, and monks from the previous era are seething. Many years later, Duan Jiaze and Luya initiated a dialogue at the annual meeting. Duan Jiaze: Luya didn’t even attend elementary school, he has been a jobless citizen wandering for thousands of years. Afterward, he found a job, that is, to be an animal at the zoo.

Mei is eating a caramel on one very windy day, when suddenly a whirlwind appears and starts chasing her. The whirlwind turns out to be a baby cat bus. Mei offers the kitten a caramel and the two become friends. That night, the baby cat bus visits Mei. Letting Mei ride inside him, he leaps out into the sky. They head for the midnight forest full of ghosts. Other cat buses large and small have also gathered together. In the forest, Mei encounters...

The official music video for I Want to Be a Super Nuko from the album Ashita Iro World End, by Mafumafu.