Legend of the Condor Hero - Reviews 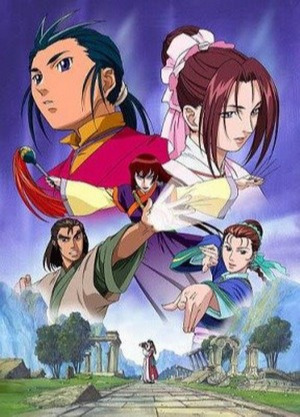 This is my first review so be gentle and im trying to be a vague. so i wont ruin it for you because this anime is a true work of art.

Story: Yang Guo is a trouble 13 year old boy who parents are dead and he is living with his uncle and aunt but due to his fighting with their children he is sent to Zhong Nan Mountain to train in the art in fighting. He doesnt get along with the people or his master because they treat him like dirt and due to anothor thing he did he leaves his master and the dojo to learn Martial arts from someone else. His new master is name Xiaolongnu and she is a beautiful 18 year old fighter who lives in a tomb training. Years past and they fall in love but due to misunderstanding she keeps on leaving and Yang always goes look for her meeting new people on the way. This is one series which you cant predict the ending and for the people looking for a happy ending i cant say beacause it was left in a clift hanger. (9/10)

WARNING: ANIME STARTS SLOW BUT PICKS UP (NEARLY 10 YEARS FROM EPISODE 1 to 26)

Animation: im surprise that this anime was made in 2001 looking like it did but the more i watched the more i thought its fits the theme. 13 century China. If you seen FUSHIGI YUGI then its like that.(7/10)

Sound: OK to start this i never miss the intro music because i LOVED it. ITs short and to the point and the music in the anime goes well with what is going on.The ending theme music touched me.(10/10)

Characters: THe two main characters Yang and Xiao are made very well. Yang start as a boy who is full of himself and turn into a mature male quickly. Xiao turn froma cold hearted bitch to a loving female lead. The relationship they have is beautiful and I always couldnt wait to see them together because of the chemisty I saw. The secoundary chartacters are well developed and you learn a lot about their past. (10/10)

Overall: I will recommand this anime to anime looking for a real romance anime. Not this Harem and fake love bull *^&( thats i been seeing. I am a romance lover who likes action or supernatural mixed in. It comes dub but i recommand sub because its closer to the translation and for me it makes more sence but the dub is ok in my book.(9/10)

So far i only seen the first season and I WILL see the next seasoncause of the clift hanger in the end. PLZ comment and tell me if anything is wrong so i can make changes.

Don't underestimate this anime, its very very good  action, romantic anime. This anime moves at a good pace and you will never bored. You will see many strong characters.

This is an extra long epic story. There are many events to this adventure and it could be viewed as a full biography of the main character from childhood to adulthood. Think of Lord of the Rings, The Iliad & The Odyssey, but set on China, during the attack of the Mongol Empire 900-1200 A.D.

It is based on the novel "The Return of the Condor Heroes" with is the second part of the "Condor Trilogy". I can only imagine how monumentally huge are these volumes, considering that this second part was split into 3 seasons totaling 78 chapters for the anime and is not even considered canon, as it has been compressed and edited to fit the time slot.

The story starts slow, actually, the full first season is mostly about introducing all the characters and the background story of what happened first (I actually had to read the Wikipedia page of the first book, to understand who was who better). Once this world is explained and the setting is done the story picks up really fast with a lot of action and adventure, it has a lot of romance as well and a little bit of everything.

I wish the animation was a little bit better, it looks almost like a show from the 80s, but for me, as long as the story is good I really don't mind watching a sub-standard animation. They kept the same style even for the 3rd season that was done in 2008.

For audio, only the 1st season is done with dubbed, the rest is subbed.

Overall it is not perfect, but with a little of imagination and being open minded this is a show everyone can enjoy.