The Knight in the Area - Reviews 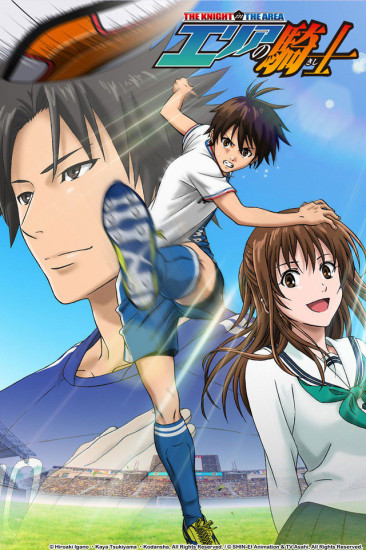 I love watching sports animes, especially the realistic ones. Soccer is one of my favorite sports. I have always planned to watch this anime, but I never got the chance to until now. Everything about it was amazing. I do not like what happens to Suguru only around 2-3 episodes in, but that is what changes everything in the anime.

I do not like how the suddenly stopped the series at episode 37. I wish the continued it at least three more episodes to see the team go into nationals.

I normally like watching anime, but I guess if I want to know what happens, I have to read the manga, which I also highly recommend.

If you like the sports anime vibe from the early 2000s you would love this anime! It does have a slow burn of the first couple of episodes ( I'd say 1-7), which if you are into battle shounen you might drop this anime. I'd give this a chance though as it does give you background information for the MC and his character growth over time.

Honestly, though, the beginning isn't implemented as you would hope as the struggles that the MC goes through aren't really based on the trauma from the accident. It is just a sports anime, which I am kind of disappointed about since that could've added a unique flare to the character and the anime as a whole if they treated him with more struggles rather than, wow kinda underdog becomes a strong troupe. I mean I get it, it's a sports anime from the early 2000s, my hopes were a bit too high.

The way they ended the series was too abrupt as well. A HUGE cliffhanger, which I can always go to the manga to figure out, but some anime watchers don't always go to the manga. The manga isn't fully translated either, even though it is completed, and could be offputting to some wanting to get into a series.

It is highly unlikely that this is going to get a second season since this anime was produced about 8+ years ago when I'm writing this. However, if you are a fan of the sports anime genre then you would have to give this a watch. But at the end of the day, it is your typical sports anime with an ending that is unresolved so take that as you will.

Being a soccer player, a dream many boys (and some girls) have growing up and  a dream our hero shares. Meet Aizawa Kakeru , a soccer fanatic just about to start high school who quit the object of his fanatism because of some past tragedy. That  kinda morphs his dream into supporting his brother Suguru , named ''Japan's treasure'' a  once in 100 years born wunderkind below top aka attacking midfielder.  But a horrible event happens leaving Suguru dead and Kakeru with a heart transplant, his brother’s heart.  Slowly he recovers , finds motivation to play again mostly with the help of the primary love interest, Nana, a childhood friend , former teammate , who moved away a few years back. They join a high school with a complicated soccer club and there begins Kakeru’s journey on to becoming the Knight in the area his brother always dreamt of, conquering the high school championship and trying to make the national team, with a bit of help from his goofy teammates and his late brother?!?!

The way I saw it Area no Kishi was made solely to promote soccer and show how much fun soccer can be. Must say it does a great job doing that, but some elements really don’t fit and give it a weird feel. The whole heart transplant saga felt really unnecessary if your whole goal was to make soccer more popular to kids. The weirdest part of all was the Tyler Durden-sque Suguru transformation in game (sorry for the Fight Club spoiler but it’s a 14 year old movie) . I don’t know if it is a weird shonen plot or Kakeru couldn’t handle the death of his brother so he created this persona inside him. The doctor treating him really needs her license removed. Kids that age have enough identity issues without the prospect of your late brother’s soul living inside you.

As much as the plot lacks sense, as do the characters lack development . Kakeru is a good-natured idiot, as most shonen heroes are, blissfully ignorant, pure of heart. He wants to play soccer, have fun and make his dreams come true. Rest of the cast includes the primary love interest Nana, secondary love interest Mai, (both National team representatives even tho in high school and Nana hasn’t played for 2 years, making your wonder how bad that team sucks), the pervy friend/teammate Kota, fantasista yo-yo dieter Araki, registra Oda, eccentric Horikawa, joker Mako, Casanova GK Kurebayashi etc. The only ones that go through some sort of development are Kakeru, who grows more confident , stronger and more determinate with each new challenge presented to him.  As well as Araki, who goes from a quitter primadonna ,(what you would expect from a star fantasista) to a dedicated hard worker.

Speaking of Araki , he Mako and Kota are usually combine in a lot of comedy sequences, which are probably the best thing about the show. Almost every lil skit with them from Kota’s constant pervy remarks and attempts, to Mako’s attempts in ridiculing Araki’s sugar addiction, hit home with me and made me laugh. Araki is my favorite, rules on and off the pitch.

From best to worst, the animation .  I don’t think anything will top number of stills this anime used. The animators are taking shortcut after shortcut , especially during matches. The size of the ball varies from time to time, sometimes big as half a leg, sometimes half a player. The way it moves from player to player feels so unnatural, which is logical when u use a still and add a really bad CGI ball. Episode 7 has such a bad animated kick, kindergarteners would do a better job with it. Worst of all a lot of scenes get recycled over and over again. The backgrounds are static no matter how many characters are in the scene.

Bad animation also leads to bad portrayal of the game itself. Players run with the ball too much, dribble 10 15 20 players in a row. The passing game is butchered by the animators. Those weird dribble stand offs, like it was a 12 o’clock western duel make no sense. They can think of super strategies but no double teams. The only thing that saves the sport within the anime are genius moves some players pull off.

Putting all weirdness aside, Area no Kishi is a good sports shonen. It feels like the director didn’t realize what the strengths of the show were and kept adding these weird subplots that went nowhere . If they stayed by the exciting matches and especially added more comedy the show could have been a lot better. All in all an enjoyable experience, and if you love sports anime or soccer be sure to check it out.