The Kawai Complex Guide to Manors and Hostel Behavior - Reviews 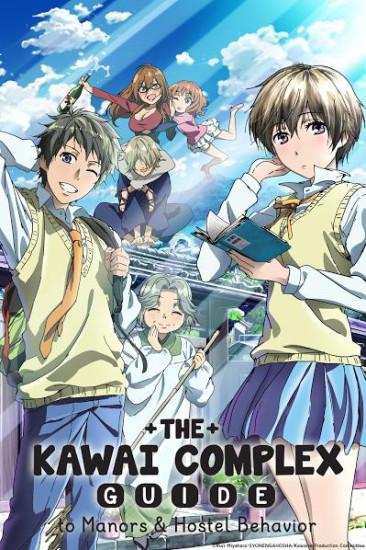 I started watching Bokura wa Minna Kawaisou, because I felt like spending time with some playful undemanding comedy. This show seemed to perfectly meet my requirements so I gave it a shot.

The first thing which caught my eye was a very lively, colorful animation. Some might say that the impression seems a little too meretricious, but I assume that this fresh look is exactly what the dried-up genre of romance comedies needs to attract spectators.

The story itself is the typical "damn-I-have-seen-this-like-thousand-times" romantic plot with a shy inexperienced Kazunari Usa who falls in love with a similarly shy, cute, tsundere-type girl named Ritsu. The anime is solely situation-based, so I was kind of missing some background story or a plot twist. In other words the show lacks something that would connect all the episodes and make it unique. The entire 12 episodes I was hoping for something exciting to happen and in the end I was kind of dissappointed.

What makes this anime attractive is the setting of Kawai Complex, where our two main characters live, surrounded by various weirdos, featuring a perverted masochist Shiro, mischievous and provocative college student Sayaka and Mayumi, permanently love-depressed woman with a tendency to alcoholism. My problem with all the characters is that they are extremely shallow. I get the feeling that they were all reduced to one characteristic feature - let's see: Usa loves Ritsu, Ritsu loves books, Shiro is a pervert, Sayaka likes to provoke Mayumi, Mayumi likes to discourage Usa and so on. The issue is that they rarely step out of this stereotype, which makes almost all the events predictable and forgettable.

I believe I already told what I dislike about this anime, but I would also like to express some positives. I really liked the first two episodes of the show. I was introduced to an interesting setting with a bunch of remarkable characters and I was full of expectations of a hilarious comedy. Indeed, there were a few funny situations (birth of the Venus), but the humor was just too simple and repetitive. I don't think it is necessary to say that I loved Kana Hanazawa's voice acting, since it is always adorable. Last but not least I have to say that I found pleasure in listening to the anime ending and that sometimes I happened to relisten it two or three times per episode.

To sum up, I would recommend Bokura wa Minna Kawaisou to anybody who feels like killing a little time by watching an unserious playful comedy. If you are interested in a cheap humor, blushing bookworm girls or big-breasted megane milfs, look no further. If you are looking for something more intellectual, then unfortunately Bokura wa Minna Kawaisou has nothing to offer.

It's cute, funny, light, easy to follow, and fun. After the last anime I watched, I needed a break from anything too complex and crazy or my mind was going to quit....and that would be bad...very bad. Anyway, I picked this one.

I'll start with the bad:

Overall, I really enjoyed the anime. I wish there was a second season. It's an anime I probably would't mind rewatching.

Also, watch Bokura wa Minna Kawaisou: Hajimete no after you finish this. It's basically a 13th episode.

I picked this up because I wanted something pretty, lighthearted, and a little romantic.  The series is packed with a lot of running gags and not much else.

The cast felt a little underdeveloped.  Though I was aware of all their dirty little secrets, there wasn't any one character who had any meat to their story.  As a slice of life rom-com, I was hoping for a bit more in the character development department.  Even with generic characters, there's still a lot that can be done - especially with a co-ed living arrangement.

Granted, they each had their "moments" where they would either stand up for themselves (or someone else) or even go a bit outside of their comfort zones.  But, after those moments passed, it's like they had never happened.  This was a little disappointing.

The animation was breathtaking at times.  If anything, it was the animation that kept me watching weekly.

By the time the end rolled around, I was really disappointed with the lack of development of a constantly growing cast.  It even felt like they were setting it up for a second season.  I'd probably watch the second season out of curiosity if they decide to make one.  And, with low expectations, maybe it will be more impressive than the first.

The Kawai Complex Guide to Manors and Hostel Behavior was a fun and entertaining anime to watch. It resembled The Pet Girl of Sakurasou anime quite a bit but in my opinion, this one was done better than the other one. The story follows Usa, a normal high schooler who is to live in a boarding home with very “unique” tenants. I can’t say the plot is original, but the situations that were explored in this story were different from the norm and just really fun to watch! I laughed so much while watching it and fell in love with the characters. I am confused as why it has had such negative reviews thus far.

In this anime, we see Usa’s quest to gain the attention of his senpai. Such efforts are seen in a variety of scenarios which leaves potential for the development of a romantic story.  The theme that is explored most however, is that of friendship. It goes to say that people struggle to find meaningful friendships as it is hard to feel accepted by others when one is seen as “weird” or “odd”. I found the message to be quite powerful and a great quality that the main character (Usa) is very kind and compassionate of others despite what other people think of his interactions with those they consider different.

The animation was outstanding! The graphics were colorful, sharp and pleasant to the eye. The character design was somewhat similar to others but it was well done. I only disliked the everlasting “blush” in the characters. The sound was fun, not much to discuss considering the shortness of the anime (12 episodes). The voices of the characters were good, nothing “annoying” so to speak such as those girly voices that are sometimes used for main female characters.

The characters in this anime are gems. Their personalities are simple and consistent throughout the anime, but they offer funny interactions between themselves. This goes to say that most of them have very strong personalities that are also different from the others so there is some “conflict” that emerges which is entertaining to the audience. My favorite characters were Mayumi and Sayaka because they balanced and complimented each other well. The other characters were great too so it wasn’t hard to fall in love with this bunch right off the bat.

I recommend this anime to those who enjoy comedy and friendship with a mix of love.  If you are looking for something short that will make you laugh, this is a great place to start!

Review Summary: Run of the mill anime that, while having good animation and an interesting representation of how introverts think, runs amok in trying to execute character development.  Unfortunately this anime is average through and through.  If you want a romantic comedy set in a boarding house watch The Pet Girl of Sakurasou.

You may like this if:  You enjoy romantic comedies involving teenagers

Take it or leave it