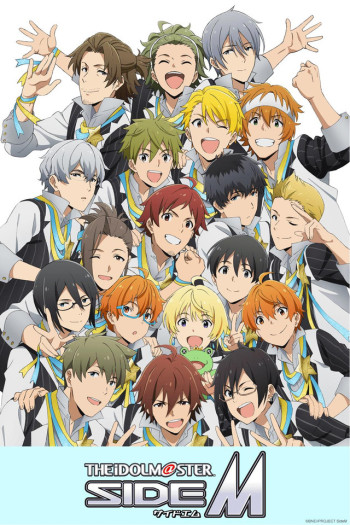 A group of aspiring idols gather at Takanashi Productions and are entrusted with the company's future. The seven men who have just met represent a variety of totally different personalities. However, they each have their own charm and possess unknown potential as idols. Forming a group, they take their first step together as "IDOLiSH7." Their brilliantly shining dancing forms onstage eventually begin captivating the hearts of the people. In the glorious but sometimes harsh world of idols, they aim for the top with dreams in their hearts!

Both animes are about a bunch of idol units that work throughout their own personal and professional struggles together, if you liked the "one unit per episode till it all comes together" format or the unique units under one company you'll probably enjoy either. Both of them even have a 5-man band unit and adorable twins!

Mankai Company is a far cry from its glory days as an all-male theater. With only one member left and debt collectors at the door, it’s no wonder Izumi Tachibana finds herself in over her head when she boldly confronts the yakuza’s loan sharks, promising to bring her father’s theater back into the spotlight. She might be able to recruit enough talent, but can they bloom into the actors she needs?

they come from different backgrounds, ages and professions, but they are dying to perform for the crowd. they have to start from scratch with a tiny agency, and make their way to their first success.

Youths aiming to become full-fledged idols enroll in the Étoile Vio School where the students are called are called IChu. But soon after they begin, Kuma Kocho gets them off to a rocky start with a single phrase...?! As they each work toward their individual goals, their activities as idols make the IChu begin to wonder... "What is an idol?" In their struggle to find an answer, the springtime of the IChu's lives is whittled out in glittering moments and flashes of brilliance. Their story begins now!

- idol beginners whose main task throughout the show is to self promote without much assistance.

- unit-of-the-week pattern by most part, but some units get to be fleshed out more than the others.

There are many idols with long-established talent agency 346 Production... And now the company is starting a new program, the Cinderella Project!Girls leading normal lives… They are chosen to be aspiring idols and see another world for the first time in this Cinderella story. Can they all climb the stairs that lead to the palace? The magic begins now…