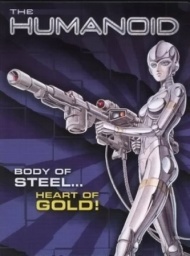 Alan and Erik are space pilots on a supply run to the base on Lazeria, but something goes wrong in their approach and they are forced to crash land in the forest. Unfortunately for them, Governor Proud is carrying out secret research in nearby ruins, and meddling outsiders don't fit into his plans. Alan and Erik escape with their lives and make their way to the base, where their friend Dr. Watson and his robot Antoinette reside. Meanwhile, the Governor’s scheme is nearing completion...

881 users are tracking this. Log in to see stats.

The Humanoid is patently awful in almost every possible respect. The story is a joke, character development is non-existent, the dub is one of the most hammy out there, there's barely any animation, and pretty much every other aspect that comprises it is a giant farce. Yet much like The Room, this 80's schlock-fest transcends badness and becomes something truly special, unlike most other bad anime of its era. Yes, ladies and gentlement, this is one of the only examples of an anime that is so bad, it's good. From beginning to end, you will be consistently entertained, and if that's not high praise, I don't know what is. The largely perfunctory story follows Eric and Alan, two intergalactic travelers, who go back to their home planet for a brief stint. Eric hands out with his girlfriend, Alan sits around, drinks coffee, then talks about drinking coffee. But bliss is momentary for our two heroes, as a villainous figure wants to activate primitive ruins in order to destroy the planet for... reasons. Throw in the titular humanoid robot, Antoinette, who quickly falls in love with Eric, and you've got a shoddily executed love triangle piled on top of this heaping mess of an anime. But it's the good kind of mess, the kind that keeps you constantly laughing throughout the brief runtime. Voice acting here is positively terrible, especially on the English side of things, which is surprising considering that it's a cast of established professionals. It's so bad, in fact, that if you watch it with a group of friends, I guarantee that you'll be quoting it for years to come. That's certainly the case with me and whoever I've introduced it to.  While the incoherent plot and horrible acting, you'd start to feel sorry for whoever released this thinking it to be of any sort of quality. Well, stop right there, because the late, great Central Park Media was very much in on the joke, if the DVD release is any indication. There's a fantastic "Pop-Up Facts" subtitle track that constantly mocks the entire thing, and is worth the entire price of admission for the DVD, at least in my opinion. Sometimes, it makes fun of the awful animation. Others, it points out the blatant unoriginality of various things. And then, when a bald character comes onto the screen, it proceeds to rattle off a list of famous bald people, like Patrick Stewart, or Mr. Clean. Oh, yeah, and this is an easter egg in the special features menu. Yep, nobody involved with this took it even remotely seriously, and that's what makes it so great. You're laughing at something, and the publisher is laughing right there with you. It's the type of consumer-company relationship that more distributors should have, and a reminder of how different the North American industry is today. FUNimation would never release a show and mock its quality, even if it were below-the-barrel garbage, out of fear of the Japanese licensors. We never get to see this kind of fun being had today, in the ultra-serious, pandering anime marketplace, and it's a damn shame in my opinion. So, taking it for what it is, The Humanoid is fantastic. And what is it? It's a relic of a by-gone era, a time when the anime industry was much more fun. It's a piece of garbage that manages to somehow be ruthlessly entertaining and fun for the 45 minutes that it lasts. And above all else, it's something that you can just have fun with when hanging out with a bunch of friends.  As an ironic comedy, The Humanoid is about as good as it gets.

The Humanoid is stupid, pure and simple.  But really, that is what makes this OVA fun.  I am not ashamed in declaring my love for campy/bad entertainment.  This one hits all the things that make them fun to watch.  A complex, indecipherable storyline, that has no context or logical progression.  Animation that is sub-par and overly dramatic.  The sound is delightfully bad--hokey music, uninspired voice acting, and the required action sequence paired with a love song.  The characters are pretty forgettable and don't really develop at all. There was some weird love triangle going on, with the man only realizing it at the last second, and the woman oblivious to it, but none of it really made any impact. What was the purpose of the titular character?  Was she capable of love or human emotion?  Who were the bad guys and why did they do what they did?  The Humanoid tries to answer these questions and throw in some action at the same time, with disastrous results.  I would recommend this to someone who, like me, loves bad anime, and has some time they don't mind going to waste.