The House of Small Cubes - Reviews 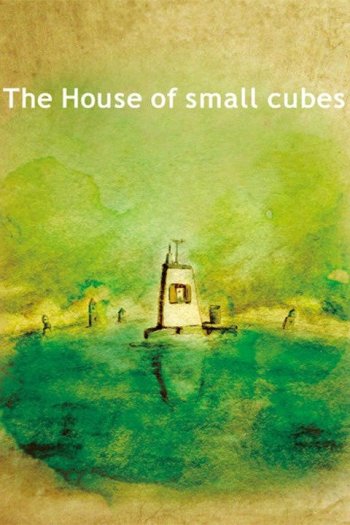 Why do you watch anime? Is it to passively waste away the spare hours of your life, or is it in the faint hope that the next anime you watch will actually make you feel something meaningful? At twelve minutes, La Maison en Petits Cubes will not waste much of your time, but it will move you on a profound and emotional level.

Even at face value, the story is a clever and innovative science-fiction tale, involving a rising sea level that forces our protagonist to build his house higher and higher. When he inadvertently drops a precious item into the sea, he's forced to explore the now sunken buildings of his youth. However, what makes the short touching and universal is not the inventive premise, but the strong metaphorical undercurrent that runs through the work. As the hero rediscovers the ruined remnants of his past, La Maison becomes a wistful meditation on nostalgia and old age, and a potent one at that.

Considering the anime's length, the emotional impact of the story speaks to the deftness with which it is executed. Short films are usually mere passing diversions: an interesting snapshot and nothing more. La Maison en Petits Cubes is the one in a million exception - the rare short film that not only tickles the mind, but challenges the soul.

A primary advantage of animated shorts is that they allow for more artistic freedom than in more profit-minded television series and movies. La Maison is no exception; the visual style is far removed from traditional anime, but is wonderful as a result. With hand drawn backgrounds and a carefully muted color palette, the short is able to exude a warmth and personality that would have been impossible for a more conventional, computer-aided approach.

La Maison has no spoken dialogue, but to call it “silent” would be to ignore the amazing music. Understated and wistful, Kenji Kondo’s soundtrack is a beautiful fit to the bittersweet work.

The only major character in the film is the unnamed protagonist: an old man living in solitude. At first, he is merely an object of curiosity, an obsolete relic to study and decipher. However, as he begins to relive his past life, the man's half-forgotten memories gradually breathe warmth and life into his character. By the time the anime finishes, he becomes both a sympathetic character and a powerful symbol; one sees not the nostalgic loneliness of the protagonist, but of all humanity.

In spite of the pretentious French title, La Maison en Petits Cubes is a gem with universal appeal. This is the second anime to ever win an Academy Award after Spirited Away, and it deserves the accolade. Don’t miss it.

Speaking about depth, the feature literally uses it to tell a story. The old man finds his favourite smoking pipe dropping in a flooded part of his house and thus goes scuba-diving in order to get it back. That allows us to have a flashback that goes in reverse, as we slowly see older and older memories of his life. You see, he always makes an extra floor in his house every few years, while leaving the others submerged to a constantly rising sea level. We are not told of what has happened to the world but it doesn’t even mater as much as getting to know the life of the old man. Each floor gives us a few glimpses of the things he had done while he was living there, things he apparently forgot with the passing of time. One could say that the sea represents oblivion that constantly makes us neglect and forget even important things in life.

By the time he reaches the sea bottom, he cares more about remembering his happy moments than getting his pipe. The scene of him playing in an open green field way before the sea covered his world is indeed very touching. We even get to see the life and departure of his wife and children. All of which happen without a word spoken!

Yes, it is a mute feature that lets the images and the music to tell you everything you need to know about the setting and the cast. It is a perfect form of animated narration as it literally doesn’t tell you anything yet manages to show you everything; a thing your average anime usually doesn’t have as it resorts to long explanatory monologues that feel forced and dry. It is otherwise low on animation or details and even the BGM is a simple guitar playing. Not that makes the feeling less powerful as super awesome artwork and soundtrack would probably distract you from the actual story of this feature.

Being minimal does not take away any importance from the actual context of the story. If it was longer in duration or with dialogue, chances are the emotions it transmits would be watered down by excess in secondary elements. I say that for a 10 minute feature, it told the story it had to say and fleshed out its main character perfectly. Plus, it leaves you with a great feeling of joy, which makes even the simplistic premise to feel far more important on your mind.

I wouldn’t say there is replay value in this, as the emotional impact will most likely thin out with each repeat. But it will definitely be engraved on your memories and no matter how high the sea of oblivion rises, you will never forget it.

At first I was like: 'Twelve minute? How in the hell can you tell a story in twelve minutes?' Then I watched it and I understood that it really doesn't matter how much time is used to tell a story. . .but rather how it's told. This was honestly some of the best twelve minutes I ever spent in my life! I was surprised at how wonderful this anime was and how great the story was! I felt so sad for that old man, and it brought tears to my eyes! Such a beautiful and poignant movie!

How many anime can do that to you in 12 minutes. . .and with not a word being said?

Unlike most of the other reviewers who pissed themselves stupid with some notion that this is a masterpiece of some metaphorical/philosophical greatness. It's not. There I said it, it is really a waste of 12ish minutes of your life. If you're a student of art definitely watch it, or if you're like me and "like art but Nah not my bag", then don't waste your time.

Pros: Artsy, nothing else.

Cons: Bad music, no acceptable lines of speech, non-interesting or intriguing characters, the story has little to no substance.

If there was some story attesting to how this world became flooded and why does it keep rising, or interaction between neighbors then there would be a story but there is none. Smoke, stare, eat, maybe build, brood about things that were, that really is the extent of this "anime".

What a touching and poignant little vignette!  This short and moving little anime, with its warm vibrant colors and evocatively affecting music spellbinds with its rich, simple story of an old man remembering his past.

It is short, only 12 minutes, and quickly introduces us to the lead character, a solitary older man living alone in a water-surrounded world. A small accident causes this man to remember and relive his past, and share those memories with us as we view them as he remembers.

Using a simple and gorgeous muted color palette, the beautiful and slow-paced animation draws us into the bittersweet story, and the perfectly-matched tender musical soundtrack tweaks our emotions so that the old man's story becomes OUR story and we feel. We feel, and we relive his life, right along with him.

I found out after I watched this that this anime won an Oscar - it is the second anime to ever win an Academy Award after Spirited Away. This is well worth the twelve minute time investment (although it is likely to stretch into a half hour, as you will likely want to re-watch it again after having seen it once!)