The Hidden Dungeon Only I Can Enter - Reviews 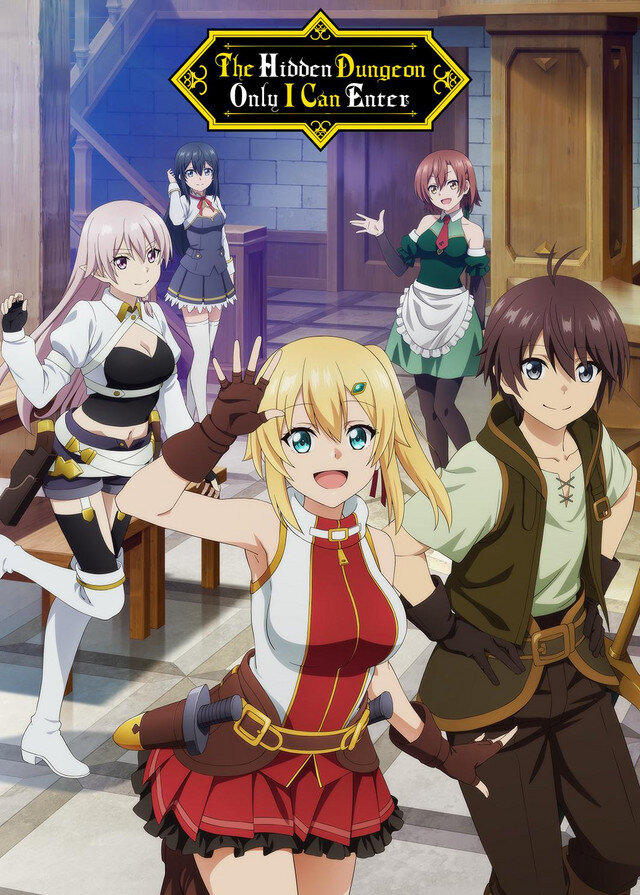 This anime doesn´t have the slightest clue of what it wants to be, it’s just a complete mess of stuff put together. There are lots of ways of making an OP protagonist interesting story wise which this anime tries and utterly fails at:

So all together anything this anime tries to do it does badly.

If you want all of the stuff I´ve talked about just watch Mushoku Tensei, and if you want something more focused on comedy watch Tatoeba Last Dungeon.

This was not what I was expecting.

The first three episodes had potential but after the fourth it went downhill. I first thought this show was going to be about how the MC has to survive magic school with harem elements but I was dead wrong.

From a weird harem contest to a mythical beast with a rose on its head acting as a pair of genitalia? WHAT!

The animation during fight scenes were not the best like other shows in the same genre, I wouldn't suggest binging this show. There are better shows you could waist time watching.

Along with other shows of this season, the story here is lost potential. I think a slightly more serious tone could have done wonders for this show. I feel that so much time was spent making sure all the girls got enough screen time, that they forgot to include an overarching plot then rushed to a weak conclusion in the last few episodes. Noir never seems to understand how to use his powers and doesn't get better at using them. if you do enjoy this show, read the manga. while not amazing either, and currently moving at a snail's pace, it is better than the anime.

One of the best anime i've seen since TONIKAWA: Over the Moon for You. This anime was refreshing, The MC actually had pretty clear feeling for a female character  and there is probably more kissing in this anime than all the anime in some seasons combined. The MC was somewhere between generic wimpy good guy and bold assertive good guy. He a times seems like  your average dense as bricks harem protagonist, however there are plenty of time where he takes the inniative even if he is shy about it and he's not entirely unaware of his romantic interests feelings even if he isnt direct about this.

The action scenes ranged from oddly stilted to near masterful, it kinda seemed like certain scenes where just made by someone less competent. That aside it didn't bother me overly much as I didn't really watch this for the action.

I would have liked more world building, It assumed everyone iis born with skills and can aqcure more through practice but its never really fleshed out.

The art and world itself looked great, The characters aside from the MC didn't look too generic, and the voiice acting seemed good (although i have limited knoledge of this topic)

All in all, if your looking for an intense action, or anything remotley serous your probably better off watching a dfferent genre let alone this show. If your looking for a good comedy with a very good (for harem) romance, set in an intersting fantasy world with a ittle action for plot proggression this is the show for you.

I haven't seen this level of dumpster fire in awhile. Even among the harem category, which has the lowest standards of all anime out there - it's bad. And not enjoyably bad where you can get a laugh out of it, but cringely bad.

This show basically is basically a dollar store knock off of Sword Art Online - which if you didn't like that then oh boy you're gonna despise this show even more. It takes every bad aspect of SAO and condenses it into this garbage truck-kun of an anime: OP protagonist with video game themed powers, dense AF, has to clear a dungeon that has 100 floors, wins every fight, and assembles a harem simply by existing. And it doesn't have any of the redeeming qualities that SAO did have.

The unique gimmick here is that the MC gets powers to basically spawn whatever items of arbilities he wants out of thin air and give them to either himself or someone else. It's like turning on creative mode in Minecraft on a survival server - the MC basically can never lose cus he just give himself ridiculous abilties and plot armor through every situation. Oh, and his powers "recharge" by having him get turned on by sexual acts which he coerces his female companions into doing - and so much of the show is buit around this and filled by excessive amounts of ecchi fanservice for almost half of every episode.

The only "notable" aspect this that has gotten some people to like it is because it's a rare harem anime where the MC actually kisses a girl. And in this case, multiple girls... pretty much any girl he spends more than 1 episode with. But that factor doesn't amount to much if said girls or the MC have nothing going for them. They're so underdeveloped, bland and uninteresting it doesn't make me care at all. Honestly if seeing kissing is the factor you care about, there are much better options out there. Date a Live, High School DxD, or even Arifureta exists if you want a harem where you get that - with notably better plot, worldbuilding, characters, and subjectively better fanservice/echii scenes as well. Those 3 do what this tried to do better by a longshot, and I'd reccomend any of them far more over Hidden Dungeon. In short; this aspect does not make it unique enough to warrant seperating it from the pile of other harems.

There's no redeeming quality to this anime. The OP is so generic and bland, and the ED isn't much better. Every character was so flat and surface level that you didn't care what happened to any of them, especially the MC. The show was stupidly predictable that you could call everything that was going to happen within the episode after the first 60 seconds 99 times out of 100. And the animation was garbage; you could make better and more intense fight scenes with a GoPro and your little brother's action figures.

Even as someone who can tolerate and even like a fair amount of harems, this one was unbelievably bad. In my opinion this might be the worst harem anime since Master of Ragnorok. Unless you're looking to review bad harem animes to learn/discuss for the list of contender for the worst shows of all time, don't give The Hidden Dungeon Only I Can Enter even the time of day. It has nothing to offer but waste your time which you can better fulfill by watching almost any other anime. I sat through all 12 episodes to express the pain so you don't have to.

Though if you did happen to like this anime and you want something similar to it... Sword Art Online and Arifureta are arguably the 2 closest comparisons. SAO for it's 100 floor dungeon and video game-based powers theme, and Arifureta for being another dungeon crawler harem anime with a similar starting plot point being finding a magical girl locked deep down in a dungeon - but both are notably edgier.