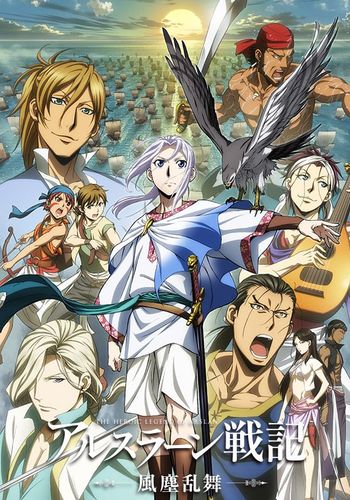 Being honest Arslan Senki is a great anime overall but it's not perfect close but not perfect, for example the very first one, it's the type of anime you see and go "eh" but if you actual watch it up to the 2nd episode it's very promising and it sorta drags you in the Arlasn Senki "Franchise", the episode are long, say 45'minutes and 6 EPS but it's 12 EPS if you want to do it that way, The second boot is also amazing again not perfect

I was not a fan of season 1 of Arslan Senki. I found the character development very unsatisfactory, and it felt too juvenile to be a good millitary anime. That being said, episode 1 of season 2 is very promising, and I look forward to seeing where Arslan Senki goes from here. Plus, it is evident that they got a real budget for the show as the animation is of a far better quality.

i liked the first season, a bit to much crying from arslan and to much annoying "i saw into the future and knew the exact thing that was gonna happen and planned for it into smallest detail" from narsus. but other than that i really liked it and i wish i could say the same for this season.
all they did this entire season was solve a pirate mystery and the season was only 8 episodes long unlike season 2 which was 25 episodes...

if it was longer and they did more than 1 thing for an entire season i might have given it higher but with such an abrupt ending and a tiny useless plot i can't recommend it.

I was so excited for season 2 of arslan.

overall excellent season I really really enjoyed it I was slightly disappointed It only had 8 episodes. I was confused I thought there would be at least 20 something like the First season but instead we only got 8.

Arslan Senki is in my opinion a quality anime. A lot of people might think it's a bit repetative and the writers are definitely trying to change the overall pace of playing "Army men" when I was a kid. I mean when I was younger "Here's a larger army out of my old men." They join forces etc. A lot of that is imagination that just seems boring after awhile, but this season things have been changed/revealed in a way that there's enough to keep someone wanting to watch the next episode. Another series that this could be compared to would be Zhetect and "The story of the archer." Where Alsace is merely caught up in a giant war using brilliant tactics.

Sound
The sound in the second episode somehow fades out under the character's speech for overpowering music.

Characters are fleshed out at this point and so the authors keep changing the plot in order to have new ones so that the old ones don't get stale.

Overall I'd rate this a solid 9.5 out of 10. It's not perfect as there's some minor flaws here and there in the show. IE the MUSIC SOMEHOW GETTING LOUDER when you want to hear the characters. Perhaps that was intentional tos how how chaotic a actual battle may have been..