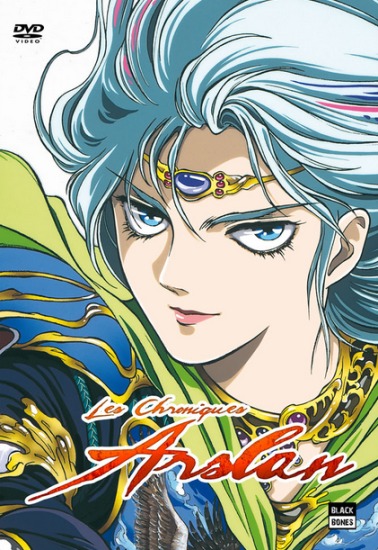 I was on a painful come-down from the seminal Legend of the Galactic Heroes when I stumbled upon Heroic Legend of Arslan. Still suffering the symptoms of Post-Awesome Anime Depression, you can imagine my desperate scramble for this OVA when I heard it was a product of the same author of the LOGH novels, Dr Yoshiki Tanaka. (If you don’t recognise either of these titles, I’m not sure what crap you’re watching at the moment, but it’s time to get off the baby food and onto the solids. That’s all I’ll say.) Heck, imagine my further delight when it proved the perfect methadone. This fantasy includes steeds instead of space ships and warrior priestesses instead of weary politicians, but for all the obvious differences, it feels just as immersive and epic. In fact, the show lives up to its lofty title within the first episode.

Prince Arslan of Pars barely escapes a sabotaged war, rushes back to his homeland to find it overrun by savage hordes, and is subsequently exiled to a vast, hostile, and culturally diverse world to seek his fortune. Despite the typical premise (similar events happen in Escaflowne and the more recent Guin Saga), Heroic Legend of Arslan offers more charming characters, all the while adding an accomplished political twist and lustrous animation. Moreover, with a comprehensive world setting rivalling The Twelve Kingdoms and a large, diverse cast, this was clearly intended to be an epic of unusually complex proportions, thick with intrigue, battles, and moral ambiguities.

Of course, as I type, a hefty globular 'but' comes surging up to splatter unpleasantly all over the glowing sentiments above. Indeed, few shows evince Heroic Legend of Arslan’s potential – again, potential – for timeless greatness, but when it comes to a definite ending, viewers will have to look elsewhere. At a crucial juncture when the plot establishes a wider context involving swords made of fallen stars, a sleeping god, and an ominous prophecy, everything stops. Dead. Even worse, potential fans seeking satisfaction from original materials should speak fluent Japanese or Chinese as neither the novels nor the manga exist in English. For some, this might not recall the steady high of LOGH so much as the emotional crash of Berserk, but this hardly denies the outstanding achievements of the OVA on the whole.

Did I mention this anime is gorgeous? As well as a wealth of imaginative pastel backgrounds, the series portrays a comfortable cross between Western and Middle-Eastern culture (Tanaka’s original concept was influenced by Persian history, apparently). Knights in armour fight against backdrops of sultry sand dunes and domed towers; swashbuckling heroes rescue veiled damsels with inch-thick eyeliner. In some ways, Heroic Legend of Arslan reminds me of whimsical Hollywood classics such as The Wizard of Oz and The Thief of Bagdad, where dreamy colours and fantastical cultures ensure an addictive kaleidoscopic milieu.

The biseinen character designs are no less exquisite. Heading the cast of slender beauties wearing colour combinations that would make a peacock jealous, young Arslan looks more like a fairy prince, bejewelled, feminine, and gently romantic. Although, the most stunning scenes belong to Farangis the warrior priestess, who becomes the key feature of incredibly sumptuous panned shots and magical sequences.

Only one flaw mars Heroic Legend of Arslan’s animation. All that delay between episodes means the show suffers a jarring switch in style, moving from soft, classic lushness to bold commonness in the final two episodes. Still, the show’s prevalent beauty overshadows its lesser aesthetic blunders.

The soundtrack may be too subtle to offer any defining themes but is nonetheless varied and enjoyable. For instance, every episode has a different pop ending theme, which is melodic, catchy, and has sweet vocal harmonies. During the scenes, heroic strings, Eastern twangs, or traditional Celtic sounds may combine with power drums for an edgy mix of the modern and archaic.

Heroic Legend of Arslan also offers a casting quirk in that, for the first four episodes, the Western voice actors are English rather than American. Thanks to this, the script plays out like a second-rate West End theatre production, suitably lofty and literary but occasionally exaggerated. At its best, there are minstrel Guibu’s ironic utterances, particularly when giving his poetic excuse to a maidservant whose bed he abandoned too swiftly the night before. At its worst, Prince Arslan sounds like a camp toff in the vein of Peter from the recent Narnia movies; with a performance flatter than a duff note and that excruciatingly sweet face, he sometimes asks for a good slap. Luckily, his and all the other characters’ Japanese voice actors perform excellently, so there is always that option when the sloppy American voice acting kicks in at episode five.

Most viewers will appreciate the secondary characters, particularly the villains, as little more than polished stereotypes – heck, Lord Silvermask is nothing more than Darth Vader in a Shredder costume! The show’s aborted running time means its supporting cast reaches a minimum level of complexity at best. When it comes to Arslan, Darun and the rest of the main characters, however, their personal growth begins almost instantly, revealing colourful personalities whose interactions are gripping from start to finish.

Tragic but hopeful Prince Arslan, for example, learns early to trust in the judgements of his wiser subjects (and yes, ladies, he looks like something dreamed up by the readers of 17 magazine). While six episodes don’t allow for a full explanation of his motivations, the series swiftly sets him apart from the hordes of pointless pretty boys on the anime market. He’s a young man of distinct, if unschooled, intelligence, and those around him respond to his glowing, quiet charisma with undying loyalty. Moreover, he’s youthfully optimistic without being naïve despite the numerous betrayals he suffers at the onset.

Finally, embittered strategist Narcasse's and charming thief Guibu's personalities leap out the fastest; their combination of cynicism and cockiness lead to amusing anecdotes and comebacks. We learn much about Narcasse’s unjust treatment by Arslan’s father, for example, and see a little of his unique wisdom shaping the Prince’s character. Also, Guibu’s monologues give insights into the complex psychology his lackadaisical manner hides. With the key actors so expertly crafted within a couple of hours running time, I suspect the supporting cast’s limited role was never meant to stay that way.

Heroic Legend of Arslan is the stuff that seasonal hits are made of, even if unfortunate constraints mean it never made that grade. With the last two episodes having been released in 1993, the assumption is that the project is well and truly dead in the water. Furthermore, stylistically, it is confused as the delay in airing leads to inconsistencies in English accents and animation quality. Nevertheless, it punches above its middling weight to entice and amaze, and for any high fantasy addict who appreciates classical beauty no matter how fleeting, this is one to hunt down at any cost.

Initially, it can be said that the anime holds promise and proves to be quite enjoyable through the first two episodes, which are also the longest in duration. However, it is my belief that the quality begins to suffer a decline thereafter. It is possible that production issues may have contributed to this decline, as it seems that the decision was made to only animate a portion of the intended content, leading to a rush to conclude various plot points and a lack of proper resolution for previously established storylines. This is evident in the subsequent episodes, which feel shallower and less thoughtful in comparison. Additionally, the animation quality deteriorates, becoming simpler and losing intricate details, resembling that of a weekly anime rather than a more fully-realized work. In summary, I would still recommend this anime to those who are interested in stories with a heavy emphasis on political maneuvering.