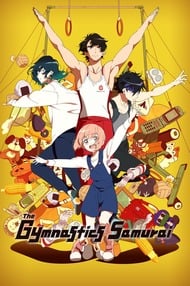 Jotaro Aragaki, former member of the national team, had given his whole life for gymnastics and was fighting against his age and physical strength. However, one day he is told by his coach to start thinking of his next career. Jotaro struggles, but his daughter, Rei, is always there by his side. But with one fateful encounter, the Aragakis’ lives change drastically.

The Gymnastics Samurai :) This anime seems to be getting some unreasonable hate. After just finishing the anime, I can say it's an awesome blend of slice of life and sports.   This anime makes you interested in gymnastics, something that I wouldn't normally seek out and watch, but it's made awesome in The Gymnastics Samurai, mainly due to the fact the anime makes you care so much for the characters behind the gymnastics as you see the heartships Jotaro and his lovely daughter Rei have been through but keep fighting for what they believe in.  Rei herself is such an inspirationally character as she selflessly let's go of things important to her and takes care of herself so her father Jotaro, can focus on his future gymnastics career.Leonardo the ninja brings some fresh comedy into the anime with the mix of supporting characters as well, but Leo also has his own heartships and it's so beautiful to see them all come together helping each other to overcome them and move forward. There are these awesome training montages that will remind of classic legendary films like the rocky series, so I personally really enjoyed these. Both the opening and closing theme songs are fantastic here, I enjoyed listening to both. In conclusion I highly recommend this anime it's unique and a nice change of pace with a perfect blend of slice of life and sports anime. (also some of the scenes will hit you emotionally., oh the feels.

There are many problems with Taisou Zamurai and the biggest, most disappointing one is its dullness. There’s nothing about this that gets the blood pumping or the heart racing – which, okay, I guess is fair since this is more a slice-of-life anime than a sports show. It looks good on paper: aging sports star gives his career another shot, only this time, he’s also got to think about the daughter he’s raising by himself and the foreign ninja who just randomly decided to play house with them. Written another way, this could have been a realistic look at your shonen sports hero years after high school. Much like Hinata Shoyo or Sakuragi Hanamichi or Sawamura Eijun, Aragaki Jotaro is a pure athlete, born with a narrow-minded focus for his sport, raw talent, and a short attention span. But he is also a single father with a dead wife and a daughter and a bum shoulder to think about, all of which really should have made this more interesting than it actually was. You could say Taisou Zamurai already had everything going for it, even before you hit play on that first episode. As it is, the show is boring, its characters are bland, and even more unacceptably, its sports montages are some of the anime’s more boring moments. This is less an actual story and more a messy hodgepodge of unnecessary storylines all competing for your attention. It’s got conflicting tones – serious drama one minute, then demented bird bullshit antics the next – and half-baked character drama, with some of them acting a certain way just to fulfill the sports anime requirement bank. In short: Taisou Zamurai doesn’t quite know what it wants to do with itself. It clearly knows some of what it’s talking about, but as if to compensate for its lack of direction or budget or both, it talks over some of the key gymnastics moments, like it’s hoping we’ll be wowed by how amazing it sounds instead of looks. Add cringe jokes it thinks is funny, forced movie references it thinks makes it look smart, and an opening song it thinks makes it more fun, and you have a pretty loud mess altogether. Gymnastics crash course, this is most definitely not. But if you're willing to put up with a scruffy dad for a protagonist, a small daughter who’s definitely smarter than a fifth grader, a weeb ballerina-turned-ninja, or even a bald acupuncturist who calls himself Britney, then there's a chance you’ll end up enjoying maybe at least ten minutes of the thing overall.

This anime was a little disapointing, considering that the storyline is kindof all over the place. Like its a bunch of random stuff thrown together. The pros of it is that a.) its very visually pleasing to look at, and b.) the characters are all very lovable. So I would still reccomend giving it a shot, if you just want something nice and fun. Oh, and the opening and end credits are super fun as well, I never skipped either once.