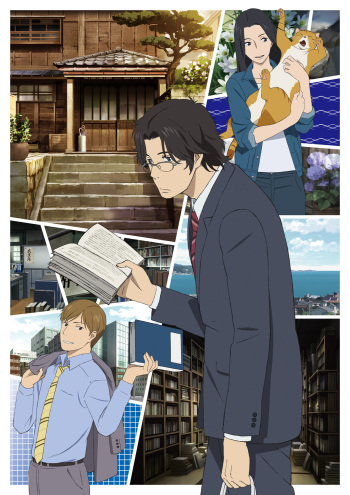 This was unexpectedly amazing. Honestly, the first thing I thought when I read the synopsis was how boring and stupid it sounded. But since I had to watch it for ALG, I started it anyway. And I'm so glad I did.

While the story itself is pretty important, it's certainly not the main focus of Fune wo Amu. It's about the characters themselves. You gradually grow to love them all, even the side characters. The main character, Majime, is an super shy nerd with a serious passion for words. There's also his complete opposite, Nishioka, who is super confident and very friendly, although I have no idea why he was working with dictionaries. There are also a few other members of the dictionary editing team, all who share a serious passion for dictionaries. It's really great to see how they face the various challanges created by making a dictionary, and how they grow as characters as well. They all feel very human, so much so their overwhelming enthusiasm for dictionaries is quite infectious. If nothing else it certainly makes you appreciate how long it takes to make a dictionary.

The OP and ED are also amazing ^^

This is a beautiful series that is very easy to overlook, because seriously, who in their right minds watches an anime about making dictionaries? If you do get the chance though, I highly reccommend it, especially to slice of life fans.

At first glance one could disregard Fune wo Amu due to how unappealing the topic of the show is, but somehow the show turns out to be quite interesting. Surprised? keep reading to know why.

The show tells the story of Majime Mitsuya as he becomes a part of the team on charge of making "The Great Passage", a medium-sized dictionary. As dull as it might sound the show manages to keep the viewers interested by giving more relevance to the interactions between the characters, and it even manages to introduce a romance subplot which flows naturally without ruining the pace. Many shows attempt to do the latter but they ultimately fail in one way or another.

The biggest drawback in this regard is the inclusion of a little segment called "The Jisho-tans". While it's quite cute and sometimes explains some terms related to dictionaries (sparing us of some senseless exposition) it hurts the overall pace of the show. Maybe it'd have been better if they put them at the end of the episode and removed the post-credits scenes in each episode.

My favourite aspect of the show is the animation though. The backgrounds are nicely done and each character has an unique design, though where it really shines is in the visual representation of Majime's thoughts and emotions as well as the multiple metaphors that are shown thorough the series.

Sound-wise I have mixed feelings. On one hand we get a well done soundtrack that enhances the different scenes in the series as well as the visual representations of Majime's feelings, but on the other we have an opening that's excessively colorful and upbeat, which doesn't fit the overall mood of the series at all. The ending was fine though.

The characters are definitely the strongest part of the series and what make this show enjoyable. Each character has some very differentiating traits that distinguish them between each other and the interaction between each other flows naturally. As expected, every major character is developed in a way that keeps them away from being two-dimensional while being realistic.

Also it's noteworthy that the whole cast is made of adults who behave like adults, something that seems rare to find in an anime. This means we don't have any stupid drama that could be solved by just talking to each other last days and days. The longest a misunderstanding takes to be cleared up is no more than 5 minutes.

All in all, this show is a good example of how good directing can make a boring subject interesting. While the show itself is not groundbreaking, the interaction between the characters, the pretty visuals and good soundtrack makes for a nice experience for anybody who's looking for a relaxing anime.

This review was written for ALC (Fall 2016 edition)

What a lovely anime...the story was beautiful and character deelopment was great...the op and ending music was right on target I am so glad I found this here...It made me cry a little and smile alot.  Definatly one to" keep in your backpocket" for a feel good anime.And the only reason I placed a 9 on sound was that sometimes the op had no sound.

The reason I started watching Fune Wo Amu is because of the seiyuus. But then.. the storyline gets me.. Being an English major with the love for the editorial industry.. this anime really hits the spot.

The way they portray the dictionary making process in the anime is very detailed and unique. the ups and downs of an accomplishment.. the never-ending trial and error.. a very feel good slice-of-life anime series.

A must watch for book lovers. Enjoy watching!! :3

Everyone must have at least heard of the workplace genre for anime. It gives an idea of what a person's work life is like, and that can be a new interesting experience.

Story- The character Majime is the protagonist and through a number of events is recruited to work on the revised dictionary known as The Great Passage, a project that spans over thirteen years to complete. Its a pretty basic premise but the studio makes it work. There are parts where the story is a little sluggish, but the anime's intent is to be relaxing. And somewhere in all of this, they made the romantic subplot between Kaguya and Majime work so well, so I can definitely say the romance was a plus.

Sound- There are parts in the anime where I found this to be lacking. There were parts that did well to reflect Majime, but that opening. That opening is like the completely opposite of the anime's atmosphere and I think that's a dentriment. Thankfully, the ending on the other hand is just fine.

Characters- I enjoyed how the writing for the characters was handled. There are cases where characters in other series end up being two dimensional if they're handled poorly. But they gave enough time and development to the characters that they set themselves to be different as the story went on.

Overall- I can say that I did enjoy the anime, but there was one part that did bother me. The halfway point would have these dictionaries giving an explanation on stuff, but it feels jarring to have it appear with the atmosphere of the anime. If they had put them at the end I think it could have worked but that didn't happen. Other than a few bumps in the road, its still a good anime.