The God of High School - Videos 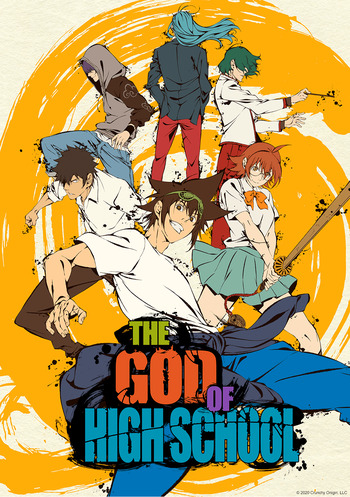 The national God of High School tournament will be a team battle between teams formed from the top three participants in each regional preliminary. Mira wins the battle for third place, meaning she will compete in the nationals with Mori and Daewi. Mujin explains to the other administrators that this is all part of the search for the one with the potential to be the "Key." At the same time, Mujin puts out a call to The Six, a group of extraordinarily powerful fighters, in order to deal with Nox, another organization searching for the Key.

Behind the Scenes of The God of High School

Anime-Planet users recommend these anime for fans of The God of High School. All available to watch right here, right now!

Fame. Glory. Power. Anything in your wildest dreams is possible when you reach the top of the Tower of God. Those lucky enough to be chosen by the tower ascend each floor in hopes of fulfilling their dreams, but to succeed, they must complete dangerous and deadly tests along the way. But there are others who can enter the structure on their own free will...

It is similar,both involves going beyond your limits to achieve your dreams.Bad ass storyline with a nice touch of martial arts depicting the the various gods,their carnage,violence when provoked and overwhelming and devastating strength only the gods of their stature possess

They are both long adventure webcomics available for free on WEBTOON, the stories are beyond creative and will keep you hooked for a pretty long time

Shirahama "weak legs" Kenichi is a typical high school student with typical problems: he's frequently bullied and tends to run away in the face of his enemies. Things change when Kenichi meets Furinji Miu, whose grandfather runs a dojo; and not knowing what he's getting himself into, he signs up to become a disciple. As Kenichi's life-threatening...

Both are shows packed with action with some comedy in between, as well as lots of martial arts. Although the main characters are quite different, both shows have a somewhat similar mood.

Although Yuji Itadori looks like your average teenager, his immense physical strength is something to behold! Every sports club wants him to join, but Itadori would rather hang out with the school outcasts in the Occult Research Club. One day, the club manages to get their hands on a sealed cursed object. Little do they know the terror they’ll unleash...