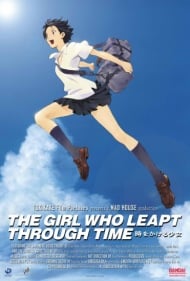 StoryAt its core, Toki wo Kakeru Shoujo is really just a standard shoujo slice-of-life show. There’s the plucky, cheerful protagonist, there’s the myriad of possible romances just waiting to bloom, and of course there’s the lazy summer afternoons spent loafing around in idyllic Japanese suburbia. The closest analogue is most likely Ghibli’s own Whisper of the Heart. The only noticeable differentiation from its counterparts is a time-traveling plot device introduced early in the show. Handled carelessly, this fantasy gimmick could have easily been a sour point (see: Junkers Come Here). However, TwKS is surprisingly clever about how it implements the time-travel into the story. Throughout the series, the ways that protagonist uses her new-found power make for some of the most delightful comedy that I’ve seen all year. The humor blends seamlessly into the drama, whose main theme revolves around the slogan, “Time waits for no one” – certainly not a unique message, by any means. Fortunately, the excellent characters and sharp writing lend the movie a compelling sense of urgency that sets itself apart from similar works before it. Every minute of this movie feels immediate and precious, and as a result, the movie’s familiar message is unexpectedly powerful. In the end, I loved Toki wo Kakeru Shoujo's story for its near-perfect mixture of drama and comedy; the movie is one of the funniest anime I've seen this year, but also happens to be one of the most poignant. Even as I laughed at the brilliant humor, I mourned the loss of the protagonist's happy childhood - a childhood which slowly but inevitably slipped away, leaving nothing but bittersweet memories.AnimationToki wo Kakeru Shoujo’s animation is, for the most part, extremely clean and fluid. The simple character designs resemble Ghibli’s (in a good way), and character movement is realistic and charming. There isn’t quite enough detail to the visuals to rival the upper echelon of anime movies, but for the most part the animation is more than serviceable. The only exception is the CGI used for the time-travel sequences. Although brief, the scenes are jarringly ugly; the protagonist’s character design looks completely out of place on the hideously colored background.SoundFor the most part, the instrumental soundtrack does a good job of setting the mood of the show. For the most part, the songs are lazy and laidback, but there are a few nice dramatic tracks as well. Voice acting is competent all-around. In particular, the heroine's seiyuu deserves special mention – her upbeat, cheerful performance goes a long way toward making the character instantly likeable.CharactersA common pitfall that many people (including myself) occasionally fall into is that anime characters must be well-developed for a show to work. If this was the case, then movies would almost never be good, because there is far less time to spend on character development in a two-hour production. Unlike characters found in series (which for the most part are required to be multi-faceted and complex), movies call for a different kind of character. Essentially, they rely on characters that are likeable at face value. Toki wo Kakeru Shoujo is a wonderful example of this. Like in Ghibli films, it’s somewhat difficult to explicitly state what makes the characters so appealing. In the end, I think TwKS’s are excellent not for what we know about them, but for their immediate actions. The characters move and talk in ways that are both familiar and unexpected. Rather than jerking like puppets to the script, they act naturally, intelligently and occasionally unpredictably. In other words, they feel alive.OverallSeriously, how could anybody possibly dislike this film? For strange, off-kilter movies like Paprika, I can fully appreciate that the show will have its fans and its detractors. However, for Toki wo Kakeru Shoujo, I can only gape in awe and disbelief at anyone who claims to dislike it. There is something so universally wonderful in Toki wo Kakeru Shoujo’s storyline that the very idea of not enjoying it is completely alien to me. As a whole, this is a fantastic work, and is looking to be the crown jewel of a year that has already yielded  several excellent anime. I’d recommend this not just to those who like slice-of-life, but to just about everyone who likes anime.

~”Time waits for no one.”~   At first, Makoto is just your typical teenage girl. She goes to school, hangs with friends, and gets terribly awkward in any romantic situation she finds herself in. That is, until one fateful day when an accident nearly ended her life. Waking near the train tracks, Makoto is astonished to find, that the train must have just miraculously missed her. It isn’t until later, that Makoto realizes that not only had she narrowly avoided death, but she had also jumped (quite literally) back in time.  Eventually, with the help of her Auntie Witch, she learns to harness this power and use it at will. Of course, Makoto begins to have fun with this, and abuses this power at first. She changes small things, petty stupid things, such as going back and eating pudding out of the fridge before her little sister can get to it. Most of her abuse of this power, comes in getting herself out of awkward situations with a boy who likes her. But all things have a limit, and so does Makoto’s ability. But by the time she realizes, it may be too late to fix the things she wronged. And after realizing that she may in fact be in love with this boy, it may also be too late to tell him.   The Girl Who Leapt Through Time starts out slow, but picks up pace as it nears it’s touching ending. Unexpectedly, TGWLTT is more of a love story than a tale of time travel, and a good one at that. It’s light-hearted, fun, and teaches us all to be happy with the life we have. Although it’s premise of awkward teenage love is rather simple, the story itself can become incredibly complex when you dig deeper into it. The ending alone has more theories and conspiracies than that of Inception. Overall, I enjoyed my journey with TGWLTT, and it’s mix of humor, romance, and believable characters make for a great night of anime. Take away the time travel aspect, and you still have a touching love story. Keep it in, and you have a wonderfully original movie that is worth a watch. Pros : Lovable, Believable Characters | Original | Colorful Art Design | Simple, Yet Complex Cons : A little slow at the beginning | Confusing Ending | Lack of Closure Final Verdict : 8/10

Story: Nothing less than an incredibly majestic masterpiece, The Girl Who Leapt Through Time is a beautifully told story about a girl who gains the ability to time travel and uses it to its full extent through the course of her high school life. The beauty of this movie is that, even though it may seem like just a normal Science-Fiction film at first glance, as you watch it you are drawn into a amazing love story with two of the best anime characters I've ever seen.  The story was bittersweet, tear-inducing and the ending the most memorable anime ending I've ever come across. By the end of the film you feel like you've known Chiaki, Makoto and Kousuke all your life and you revel in things what make them happy and cry in things what make them sad. The films ending is one of the only things ever what have made me cry and it teaches you a very important lesson: To not take love for granted, because one day it will leave you. Animation: Admitedly this could look a little...unimpressive at times, but in the important parts such as the ending the animation went up a notch and became simply superb to say the least. Actions like the characters falling or walking could be a little iffy, but thats it. Sound: With a beautiful soundtrack consisting of stunning songs, The Girl Who Leapt Through Time easily is the anime with the most memorable music for me. The ending song, Garnet, as well as the perfect song Kawara Nai Mono are just a few of the amazing tracks featured throughout this movie, and I've never heard better music than in this film. Characters: Some of the best characters in any anime, the love triangle between Kousuke, Chiaki and Makoto is amazing. Chiaki is simply adorable and his story concerning Makoto is bitterweetly beautiful. Makoto, despite being tomboyish - a trait I can usually find irritating in female protagonists in romance shows- I found to my pleasure was a very likeable character, likewise for Kousuke. There wasn't one character who I didn' love; and this was a good thing. Overall: Amazing film, amazing story, amazing characters, amazing animation, amazing music. WATCH IT. 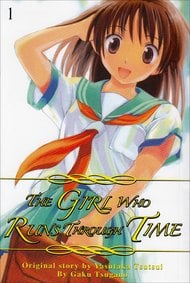 The Girl Who Runs Through Time 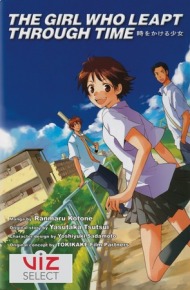 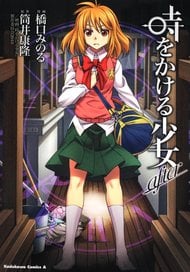 The Girl Who Leapt Through Time: After