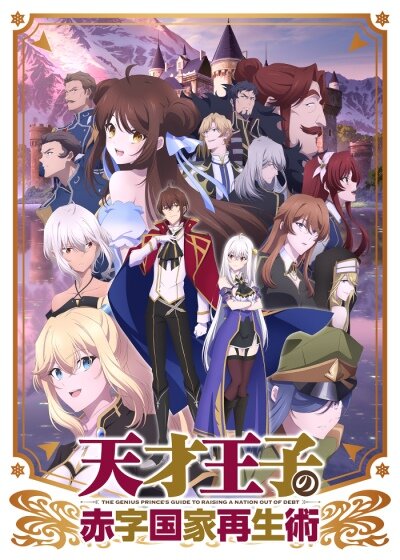 if you came here for big brain moves, you aint gonna get much. But you'll be entertained! and that's better than big brain moves! i think?
if you just like political/royalty anime, this will be for you.

if you're here with the "IMPRESS ME PEASANT FOR I HAVE 999 IQ" attitude, you wouldn't like it. but if you just realised that it aint a big brain pepega anime while watching the first episode and said f- it imma sit back and be entertained, you'll do just fine!

No need for a break down for this anime, the characters are nicely made to have more than one dimension (they feel more alive) including some of the "villain" characters as well which was a pleasant surprise. (but if im picky some of the villains are pretty 1 dimensional but meh we aint seeing em no more so who cares)

You cant have a kingdom style anime without wars can you? and i appreciate there's no characters too supernatural (OP) to make the battles easy like other kingdom building style anime, so strategies are actually needed.
finally, the mix of cheeky moments are just perfect, not too many that it breaks the flow of the show, not too little that it becomes an edgelord pepega war anime.

Overall, i enjoyed it very much.
Personally i think if you're expecting cool wars and bloodshed you might be dissapointed (DEAAAATH BLOOD DEAD BODIES) - that's what i meant by edgelord pepega war anime btw - but i personally watch anime for a bit of escapism/good vibes, so not a fan

One of the funniest anime I've ever seen. If you want to laugh so hard your stomach hurts while having to smallest bit of drama in it. It is a must watch

Absolute shit. I came to watch it with great hopes after reading the whole light novel series and I couldn’t get past the first episode. They literally butchered the story. Mind you: the whole first volume has been condensed into just one episode, and for the next ones, it’s 1-2 episodes per volume.

The main interest of the light novels resides in the intricate political schemes, and how they are viewed and discussed by the different groups in turn, but how are you supposed to have one whole volume of that in just 24 minutes? Well you can’t. And all that’s left is a cookie-cutter OP protag with a harem and a few comedic moments…

Should have been called The Genius Prince's Cunning Plans, even though most of the time he was relying on pure luck. I didn't think any of this story was about raising a nation out of debt. He might have took over a gold mine and was selling banned products through a network to overcome the ban, but the story was not actually about this. Most of the time it was about another royal family causing issues and he comes up with these elaborate plans before he even leaves the castle.

Now I know maybe the  point and all may be too high but I really liked it, but the thing is, it was not what I was expecting I have hand the show that for the very least I was expecting more of a money problems in the country and all that it should actually should have been ' THE GENİUS PRİNCE'S ROAD TO KİNGDOM ' or something like that because I did not see any money issues or anything like that. Is it bad ? No acutally some what better than I expected let's keep it at that. Recommended.