The Garden of Sinners: Epilogue - Reviews 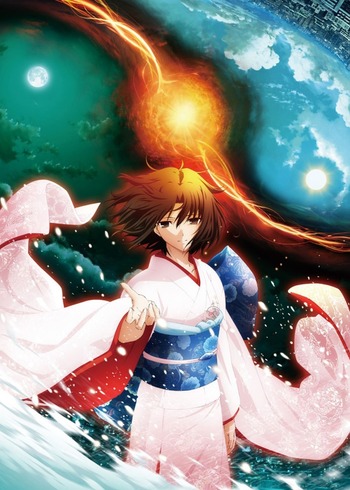 Finding a way to end a story can be a little tricky if the tale in question has no "natural" conclusion, and in cases like those there is a tendency towards overemphasizing key events in the plot or particular moments of character development through the use of flashbacks or the ubiquitous clip show before the big finale. There is a problem with this method though, as while it can be effective in the right sort of setting, it also has the potential to ruin a perfectly good narrative. That said, the last hurrah of the Kara no Kyoukai franchise is an interesting variation on this idea that may see more use in the future.

Set after the events of Satsujin Kousatsu Part 2, the Epilogue takes place on a deserted road overlooking the town, and is nothing more than a conversation between Mikiya Kokuto andRyogi Shiki after the two meet on a snowy night.

The main thing to realise about this installment is that its sole purpose is to close off the series, but the approach it takes may not sit well with certain people as it adopts a far more introspective and thoughtful stance than any of the previous outings. The plot has one goal, and that is to explain Kokuto and Shiki (who they are, why they are, their relationship, etc), and as part of this it also resolves some of the questions that were left unanswered at the end of the final movie.

What's interesting about Epilogue is the manner in which it delivers the information to the audience. Gone are the dark storylines with their action based resolutions, and replacing them is a much quieter, dialogue heavy look at Kokuto and Shiki as individuals. The method used to reinforce specific points about one or both characters is also intriguing as it utilises the recounting of previous installments, but rather than use the traditional flashback sequences (which would really ruin the mood), Epilogue weaves them into the conversations in a manner that is more referential and comparative than anything else.

The overall atmosphere of quiet contemplation is heavily influenced by the look of the show, and the orange-yellow glow that permeates the town and its outskirts gives this episode the feeling of warmth and tenderness. One highlight of the visuals is actually the gently falling snow, which may not be obvious at first as quite often people make judgments based solely on the strength of the foreground and characters. Weather effects are common in anime, but studios rarely distinguish themselves in this department so it's nice that Ufotable have decided to redress that imbalance in a small way, and one look at the panoramic views across the town will highlight just how much effort they have gone to. The overall effect of both the illumination and the snowfall gives the show an ethereal quality that is rare in anime, as rather than relying on special effects and tricks to fool the viewer, it instead uses reality as the benchmark. The only flaw with the snow is that it doesn't stick to clothing or settle on the umbrella, but this is a relatively minor gripe that doesn't really affect the episode as a whole.

There's not much of a change in the overall look of the characters except for the fact that they appear older and more in tune with themselves than before. The difference is actually in the details, in particular in the facial expressions of Kokuto and Shiki. Both have undergone a metamorphosis over the course of Kara no Kyoukai, and this is reflected in the way they look at each other in this episode.

One thing that stands out in this franchise is the quality of the acting, yet while there have been some great performances throughout the series, Epilogue's quiet nature is a very different proposition from the bouts of frenetic activity and angst in the movies. To their credit both Suzumura Kenichi and Sakamoto Maaya offer very good performances, but along with this is the sense that the pair are more comfortable with their roles than at any time before, and this has the effect of "relaxing" the flow of the story.

Another key area for the franchise is the music, and Epilogue is no slouch in this department. The show begins with a haunting classical piece dominated by flute and piano, which leads into purposely subdued background music that at times is barely audible, especially during conversations. The subtlety and slightly off kilter nature of the music, together with the occasional "enhancing" of the speaking roles, add to the dream-like atmosphere of this episode, and all of this is rounded off by a choral, hymn-like ending theme.

The strangest aspect of Epilogue is that it doesn't focus on characterisation or development in any tangible manner. Instead the viewer bears witness to what appears to be character affirmation, which is surprising as the series has studiously avoided this in a number of ways. The interesting part about this though, is that the script has been written in a way that conveys a sense of inevitability, and the focus on introspection and explanation is a major shift away from the more dynamic dialogue of previous outings.

At first glance Epilogue may appear to be a strange and far too wordy addition to the Kara no Kyoukai franchise, but don't be fooled. There is a depth here that may surprise a few people, and while there are no knives, guns, action and the rest, it more than makes up for this by allowing the viewer to empathise with the characters in a way that the movies have ignored up to now. That said, while I enjoyed this addition to the series there will undoubtedly be others who find it far too slow to be entertaining.

Taken as a stand alone episode this may seems more like an art house anime than anything else, especially with the introspective dialogue laced with psychology. As part of the whole though, Epilogue offers closure on one of the major themes of the franchise (the relationship between Kokuto and Shiki), and also provides the series with something that has been missing from day one - a proper ending.

I have mixed feelings about this Epilogue.

Going from the high-end action scenes filled with intricate mystery in-between to a philosophical breakdown on existence and the meaning of the human body, it's quite the transition.  The movies have the perfect balance of meaningful talk and action while this is 30 minutes of philosophy.  Do you care where a personality lies within a human?  Are you interested in what it means to be human?  How about what a human consists of?  This Epilogue presents it's own view on existence through the embodiment of nothingness that is Shiki.  Once again, there is some information you learn in regards to Shiki and her personality.  Again, this does bring Garden of Sinners to a closure, sort of.  The anime answers questions on how Shiki and SHIKI, complete opposite personalities, and how they managed to co-exists.  It just might put you to sleep.  Though I liked the information but I kept looking to see when it was going to end.

The animation is superb like the movies.  There are some great visuals of snow falling and even some shots that would make badass backgrounds.  Lots of snow though.

Sound?  Besides OP/ED....none.  Besides the gentle voice of Shiki and the falling snow.

You learn more about Shiki through extreme one-sided conversation.  Read above for clarification.  What is destined for Shiki and her bodies origin?  Bear the 30 minutes and learn a lil!

Overall I would watch it, since it provides answers to questions I didn't even think to question.  If the main reason you are watching this epilogue is for concrete evidence about Shiki and Kakuto, then yes, they remain with each other.  It's a different approach than the movies were but it goes by quick and in the end, learning about Shiki is worth it.

The artwork is simple (mostly just snow and characters and a background), but clever use of camera angles makes up for it. The use of sound effects is clever, and the voice acting is rather nice. But still, this is not much more than an added tidbit of philosophy for those who enjoyed the series.

There's no point in rating everything on its own. There is no actual story here. The characters don't really matter. The animation is simplistic with just one scene (yet good for that), and the sound has clever effects but is essentially just voices. This is somewhat memroable, and while it is just two characters talking (and by talking, I mean monologing), it is definitely a nice bonus for people who watched the Kara no Kyoukai series. Still, not much more than that.

If you watched the series and feel like you'd want to hear some introspective philosophizing, then watch it. Otherwise, don't.

How much you will like this epilogue, I think, depends entirely on how much you like the rest of the series as a whole. I love Kara no Kyoukai more than my next breath of air so I am hooked from the beginning to the end of this epilogue. If the rest of the series isn't necessarily your favorite thing, you'll probably get bored of this in a hurry. There's no action, no intrigue, just two characters talking as the snow falls around them.