Let me be truthful initially I hated every aspect of episode 1 ....but gradually the story line got better that makes you hook up to this anime...around halfway episode 6 was superb ....mystery and thrilling....I only have one thing to say continue to watch till the end rather than breaking/stalling/stopping the anime partway.....

In the beginning I have thought of this series as an anti-isekai, but I don’t anymore. This review has to contain spoiler for the twist in the first episode otherwise I couldn’t possibly make a review. Yes, it’s one of those first episode bait and switch twists. It’s true that the initial premise is interesting especially the element of getting people with superpowers into your world is rather than helpful a very destructive and dangerous thing. Thus, if you get illegally summoned into the world, you get killed before you could hurt others or be exploited by someone. After the fake male protagonist is disposed of, because one of the key elements for the series is GL (shoujo-ai) element and you don’t need men for that. The story follows the true main characters of the series teenager outworlder Akari and young priestess/executioner Menou. At the centre of the story is their strange relationship [1] and it’s not just for the reason that they are both girls. Menou has task of executing Akari, but her power makes her very hard to kill. I can’t say I enjoyed their slice-of-life interactions in semi-fantasy settings. What I did enjoy is exploring the world and some pretty interesting ideas about the magic and calamities. For example, the more outworlder uses his power the more memories he loses and becomes more like husk embodying pure concept he has been bestowed with. Let’s not forget I did enjoy some interesting plot twists including even the very predictable one [2]. I did like the contrast between official relations characters had and things they were doing otherwise in the backstage so to speak. The GL is pretty mild (baiting) and most comes from Menou’s kouhai* Momo, who is very openly all over Menou. I liked more banter between Momo and princess Ashuna – other reoccurring side character. One more important thing the series has substantial portion of it dedicated to action. The combat utilizes magic powers. It can be bit gruesome with some segments involving human sacrifice to produce monsters. Overall action is decent. In tone the series when it peels off the slice-of-life segments it feels darker than average isekai. Visually the series looks good. It does utilize CG for magic and some monstrosities. It isn’t the primary reason I watched the series. OP is nice visually, but musically ok at best, which makes it completely forgettable. ED already forgot that. Overall, this is one of the few series I sticked with through the season. The story is pretty much the first act before more interesting things happen. The goals and most of the characters have been established [3]. Now, the story could step things up, but before it could the final episode rolls out. If there isn’t the second season, I’d have to read LN, because manga seems quite behind as well – the fourth volume is going to be released soon. * Younger co-worker. Spoilers [1] Strange in sense Akari tries to save Menou from dying and Menou wants to kill Akari [2] Obvious plot twist of Akari having reverted the whole story several times before in order to avoid the bad end. [3] There are still things not clear about Menou’s master and mentor Flare.

[[THIS REVIEW CONTAINS NO SPOILERS.]] <<First and foremost, beware of reviews. Almost everyone spoils the first episode.>> [Story Rating: Average]A unique twist on the same-old boring isekai frame. Cool premise, poor execution. My high rating goes mainly for the creative world-building and the premise. The magic system looks flashy and cool. Magic is infused with the world, and feels natural. Nigh everything we use in real life is fueled by magic here. An interesting atmosphere is present. Sadly, because the story is short and lackluster, the show is ridden with filler scenes which kill the immersion. While the show certainly gets better with time, it doesn't get that much better. [Animation Rating: Great]The animation is good. No still images, everything is properly animated. Fight scenes and magic are gorgeous, gore on-point. Characters are pretty and smooth looking; costumes and dresses were designed with love and care. Facial expressions are easy to read. The general style is simplistic and smooth, but it fits the anime well. The in-combat magic is superb. This is where the anime thrives. [Sound Rating: Average]Fitting sound-effects; cool music during action scenes. Pretty generic stuff, nothing visionary. Expect some infuriating voice acting, though. [Characters Rating: Bad]The level of enjoyment characters provide is fluctuating. When introduced I thought they were nothing more than cardboard cut-outs, nothing we haven't seen at least a 100 times. But as time went on, I really grew fond of them. There are some fundamental flaws, so let's talk about it. This is a harem anime. Characters are thirsty and infantile, and bad. But not in-combat. Everyone seems to have two personalities. In-combat, they become awesome. Combats are flashy and highly enjoyable. Out of combat, though, brainmelting conversations, thirst, thirst, thirst, filler scenes, and the strong urge to fast-forward, or watch Shingeki no Kyojin for the fifth time instead. They all have some level of development, but it's always ruined in some way. It never feels like good writing. And although it gets better with time, it really doesn't get all that much better. [Final Rating: Average]Lacking and flawed. While it certainly has an audience, if our taste is anything similar, you may want to skip this one. If you're younger, and like isekai very much, maybe you should try. I will watch the second season, but I don't expect much. [Bingeability: 1 2 3 4 5] 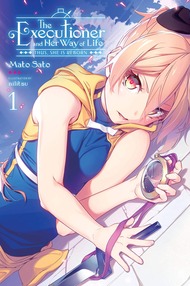 The Executioner and Her Way of Life (Light Novel)