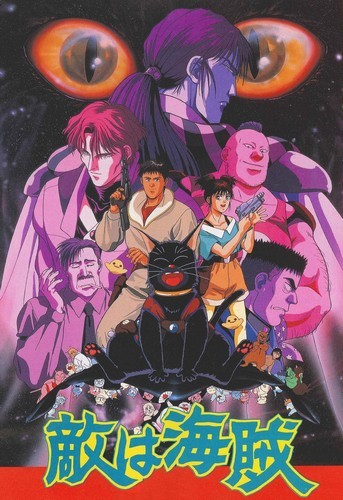 StoryIt was difficult trying to figure out what score to give this series in the story category. First, the story itself is mostly a slapstick type comedy involving Apulo and Lateil. There is a ton of filler, and many scenes shown simply for comic effect. Lateil is interested in Marsha, who thinks he's awful because of how "badly" he treats Apulo, who laughs all the way! Hilarious jokes are exchanged, especially between the ship (Lagendra) and the duo, who are obviously "inferior" to him. Like I said, a great deal revolves around comedy, and it really succeeds. I don't like harem comedy humor, or ecchi humor, or generic humor. What I like is random off the wall humor which makes me laugh off guard, and Enemy is the Pirates succeeded 100%. One sample line, for example, is when two branches of the police (basically) are playing a baseball game, and the always hungry Apulo decides to eat one of the bases. When the other players get angry at this, the ship very calmly states something to the effect of "well, there's nothing in the rules that say a player can't eat a base!". So for the comedy, I'd give a high score. But on the other hand, the actual story, while somewhat interesting, is definitely on the back burner, and isn't that exciting. I think the problem is that the comedy was enough to make this a really entertaining OVA (though not 6 parts, it could have been fine with 2-3 episodes), but they felt they needed to make a plot as well. This plot was poorly executed and poorly spread out throughout the OVA (with two episodes in the middle of the 6 being totally filler, which detracted from the plot even more). And as a plot, it was very weak anyways, with not enough time for it to develop into something more. The plot took away from the comedy as well, since time that could have been spent with slapstick randomness, was wasted on a trying-to-be serious and engaging plot. In the end, I still gave a high score, because the slapstick aspect of the show really was refreshing. But as a plot, it suffered for sure, and became uninteresting quickly. So if you decide to watch this, watch it for the randomness, not the story. AnimationThe visuals were definitely reminiscent of the time period this was made, with fairly simple, ugly looking character designs (though Lateil definitely looked like a bumbling guy!). Apulo is a very abrasive looking cat, but still manages to fit his comical image perfectly. Thick black lines were used for outlines, with a combination of solid shading and small lines for effects. The special effects (explosions and such) were definitely the most lacking of all, seeming cheesy and simple. The colors were an extreme range, sometimes greens and blues, other times reds, and usually they were all mixed together in a very ugly assortment. While they definitely were not the prettiest, the visuals still fit the time period well and have amusing character designs. SoundThis is another score that was difficult to ascertain. The music is almost 100% (if not 100%) cheesy buttrock music. Given the tone and feel of this series, the music fit PERFECTLY. It's hard to explain why, it just has such a campy feel, just like the slapstick humor of the characters and situations. The buttrock prevails in not only the opener, but the regular series, and the closing song! But this is also where the music fails a bit, that it seriously is the same 3 buttrock songs over and over. Every battle or action moment, the same song is played. The outro, same song is played. This was great and fitting for a few episodes, but then got very old very quickly. It would have been nice to change it up a bit, or even throw at least one non-buttrock song into the mix. CharactersTruly the funniest part of the series was the fact that Apulo could somehow put an "emotion lock" onto the characters, changing their personalities to be a certain mood of his choice. Marsha, who is always doe-eyed and super caring, would be transformed into a violent badass who wanted to shoot the pirate herself. Or if one of the characters had a reason to get mad at Apulo, he would conveniently make them super happy instead! This made for some very comedic situations, watching the characters transform from their well played roles, to their new roles and personalities. In general, the characters fit their roles well, and voice acting was just fine for everyone. OverallThe Enemy's the Pirates was a very enjoyable watch, though perhaps spread out too thin for the "plot" it tried to employ. If you are looking for a slapstick type comedy, you can't go wrong with this one, just keep in mind that the plot sucks and that you probably won't get much enjoyment from it. With decent animation and an amusing, yet tiring after awhile soundtrack, I think this is a good watch for those who want a mindless laugh fest. And hey, if you don't like the plot like me, at least watch 1-2 episodes. You'll still be amused, but won't waste the full 6 episodes worth of time!