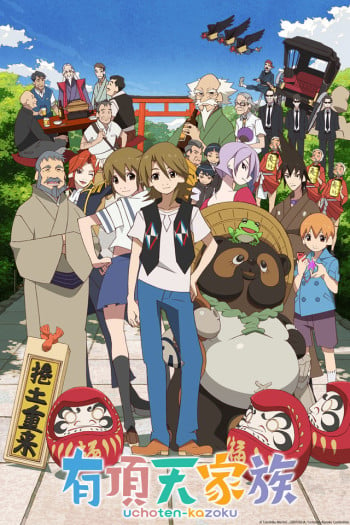 Outside of the opening theme song, I don't have any criticisms. It plops you down in the middle of a whimsical world and expects you to find your way. If you're patient, you are rewarded with rich characters, beautiful animation and laugh-at-loud dialogue. 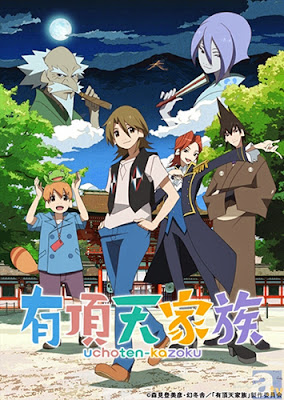 In this day & age it's sometimes very hard to find something original, the anime as a form of art has now become so generic & predictable with typical shounen & typical ecchi spewing around us from all direction that it is really hard to remember sometimes that this is not only a form of entertainment (or rather shameless fan service) but it is also a form of art. And fortunately there are still anime's like "Uchouten Kazoku" still being made to remind us just that.
Story
This was actually based on a novel by Tomihiko Morimi which is the story of a family, of a certain peculiar family at that, cause the members of this family aren't human. This is a story of a "Tanuki" family. Early on our protagonist tells us about the world he lives in, a fictional version of modern Kyoto, where Tanuki, Tengu & Humans co-habit, humans are obviously at the head of the food chain, and Tengu's are creatures that can fly. So what are Tanuki's? They are shape-shifting racoon dogs (bet you didn't see that one coming). This is the story of four brothers of a tanuki family , their mothers & their friends; the head of the family that is their father was eaten by a group of human called "friday fellows" who eat tanuki every year as a tradition in their year end bash. I know this seems confusing so far, but believe me under this weird exterior there is a really beautiful story. We get to observe the life of this family through the eye of one of the brother's, our main character Yasaburo. We get to know this beautifully imagined fantasy world, face the challenges you have to face by being a shape-shifting tanuki, and get to know the truth behind how the head of the Shimogamo family really died.
From the small little funny bits like Yasaburo warming his butt (or else he will catch could); to his weird shape-shifting practices; to all the allegory about an actual loving family-life, the nature of humans & the corruption in our political circle now-a-days everything is written in a almost flawless way. There is layer upon layer of details on every scene & intelligent dialogues throughout the show.
The story is almost flawless in what it tries to achieve, it gets 9 out of 10 from me. 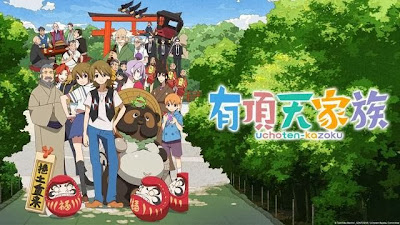 The characters are so meticulously imagined by the writer that it really shows the amount of dedication & care he really gave his work. From the responsible yet too much trying older brother Yaichiro, to the carefree yet guilt ridden Yajiro, to the "most idiotic of the blood" Yasaburo, to the timid and shy Yashirou all the brothers are so well developed characters. There is their loving mother (who is one of the most realistic mother figures I have seen in an anime); the mysterious & unpredictable Benten (who you will be constantly wondering about, if you should love her or hate her); their angry & irritable sensei Prof. Akadama; the loveable Kaisei; and many other artistically written characters.
Most of the characters are so well written & well developed that is really unique in this times cause now-a-days most of the animes have 90% generic characters (even some good ones do lack in this department).
It gets another 9 out of 10.

Art/Animation
This anime also features very unique art, all the character designs are delicate and drawn with style, the backgrounds are colorful, all in all it does portray the wacky & weird image we get from the story quite nicely. Occasionally there are some scenes which are a bit flawed or feels out of place but overall the art & animations fits the nature of the theme that the writer tries to convey almost perfectly.
It gets 8.5 out of 10.

Sound
The opening theme is "Uchouten Jinsei" by milktubIt  & the ending theme is "Qué Será, Será" by fhána,. I really like the opening song which fits nicely with the sense of wackiness this anime first tries to establish in its viewers, I get where the ending song is coming from, it was definitely aiming to get in touch with the other side of the story that was the beauty of it but I don't think the song does add that much on the total experience. It might seem a bit unusual but I liked the sound effects used in the actual anime much better than the actual opening and ending theme, there is a bit of keyboard (or other instrument) piece in some of the intense sequences which is quite beautiful, and the other bits used on emotion sequences were quite exceptional to me too.
The sound gets on the whole solid 9 out of 10.

This is the kind of anime that reminds me of why I am still sticking with this genre of entertainment. Just when the anime world is filled with generic hero fights endlessly to save the world or a girl or closet pervert hero gets caught in between lots of big breasted & scantily clothed females if you really look hard enough you find gems like this. This kinds of stories rejuvenates the believer in me (on a side note it also makes me sad that I don't know Japanese, or I could have read the original book).

This is a must watch anime & one of the best of the season and of 2013. Don't waste your time reading this review just go watch it.

If I had to use one word to describe this anime, it would be, "Delightful."

Story: Uchouten Kazoku did a great job of showing rather than telling its story. It has a "chaotic comedy" appeal which is underscored by sad and serious moments. The story has an intricacy that reminded me of Baccano!, although the genre is completely different. Lots of characters, interacting at various points throughout the story, gradually revealing a bigger story. It does well with bringing up past events by focusing on the parts of the past that are relevant to the story without using drawn-out flashbacks.

Characters: Great! The characters were interesting and dimensional. They never seemed cliche, and in fact, seemed pretty unique and original. The clash of characters and their various goals drove the story forward, and there were plenty of interesting relationships between characters.

Animation & Sound: Good stuff. I stopped the show at several points to take screenshots so I could make them my wallpaper, and they looked awesome. The level of detail in background scenery was high, and there was a certain style to the characters. Sound worked well with the story.

Overall: 9/10. If you like slice-of-lifes with good stories, or shows about youkai with comedy and drama, this is a great pick for you. Uchouten Kazoku is somewhat of a hidden gem--fresh and entertaining. I'd highly recommend it.

What I Liked: The Opening Theme. The characters are interesting and nicely designed, especially the Mother and Benten. The background art. (Pretty much the animation full stop.) The soundtrack. The overarching "issue" isn't thrown in the viewers face randomly - it ends up making up important aspects of the plot and in most character's developments.

What I Didn't: Episode 7 re-cap in Episode 8 was not needed. Slippery-slope mood change - goes from light-hearted to dark and serious in 11 episodes (then a little happier again after that). Not exactly the most adventure-filled or engaging series, for one about mythical creatures in society.

Final Verdict: Uchouten Kazoku presents an alternate version of Kyoto where mythical creatures live alongside humans. While such an idea sounds like a breeding ground for heart-pounding adventures and fantastical events, the series doesn't go down this road. Instead, it chooses to be a simple understated series about family, Tanuki politics and the importance of living while you're alive.

It was an interesting watch. I'm unsure about Benten, didn't really care much for her. It bothered me that Yajiro never changed from his frog shape, but I guess that was important to the story? All he added to the story was that he felt bad that he might have been the reason for his father's death, which he wasn't in the slightest. I had a few problems while watching it, though I still enjoyed it. I might've liked it more if the Ebisugawa brothers hadn't have been so annoying. There's a lot I could pick on it for but I still watched so not much I can complain about. The ending was also kind of mediocre. They had this whole plot leading up to it and it wasn't even that eventful like the rest of the show. If you're thinking about watching it, maybe do or don't, your choice.