The Dog of Flanders Movie - Reviews 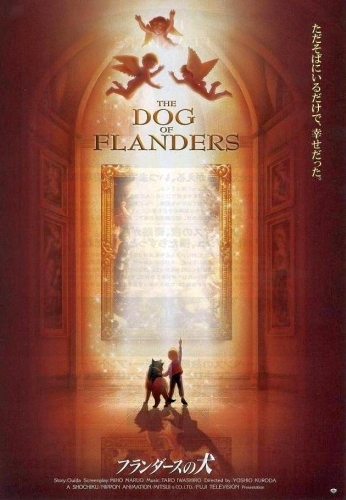 This movie is very depressing, I would say on the same level as Grave of the fireflies, if not more so. So if you don't want to be depressed and potentially cry buckets I highly suggest avoiding this. So does this movie have any worth aside from being an emotional tear jerker? Honestly, not much... its very apparant that the movie is trying to elicit a specific reaction from you and without that its just a cliche sad story, with some light religious themes thrown in.

Story- So theres a kid and his parents died... aww thats already pretty sad right? Wrong! It gets even worse and we don't really get familiar with his parents anyway. So hes living with his gramps, whos a nice guy and a rich girl will often come and play with him and obviously her parents won't stand for it. He also has a dog (thus Dog of Flanders, the place where this story is taking place) and a two other friends who are most likely in similar situation as him (orphans iirc). So The story starts off and we learn that he really likes painting, but he can't get any material to do this and his dog had cruel previous master... and then the grandpa dies. It just goes spiraling down from there giving only the slightest glimmers of hope, but you know things are not going to turn out okay, because you know what kind of story this is, but at the same time if your like me you'll end up crying like a little girl anyway.

Animation- The character designs are quite simplistic, and have a ghibli type quality but are effective for this kind of story. The other animation is not really all that impressive for the 90's there were a few scenes that I thought were quite good though, like the paintings in the cathedral(nunnery?) the scene of the burning windmill, overviews of the city and the snowy forest.

Sound- Nothing very memorable, even the ending theme which is in english (not engrish) is your average hopeful disneyish song. The OST definetly works for this kind of story though. Your classical music with lots of strings and what not, but not very original.

Overall-So pretty much this is Grave of the fireflies in Belgium. If your looking for a sob-fest with similar qualities then go ahead and give this a try, if not then steer clear