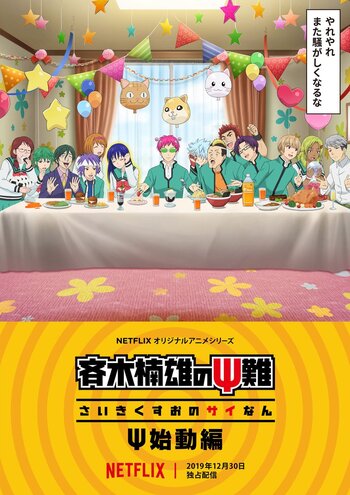 I like the animation and I love the characters, but I hate the sound of the new dub. It ruins the whole show for me. I enjoyed Jerry Jewell voicing Saiki way more than Kyle McCarly. I think Jerry did a way better job because he sounds bored and sometimes kind of interested in certain things. He really brought the character together in my opinion. However, Kyle makes Saiki sound likes he hates everything. You can hear it in his voice. Sure, Saiki acts like he hates people, but he doesn't actually hate them and you can really tell that he truly likes being around his friends.

After having watched The Disastrous Life of Saiki K. and its two equally awesome sequels, I couldn't help but want more. I was really hyped for the release of Reawakened. In my opinion, this had a lot of new things to offer. Most importantly the introduction of two new characters and the sharper delivery of comedy. In addition to that, what I personally found to be most interesting was how the overall interaction of the side characters with the plot changed as compared to the other seasons. The characters do play a part in shaping the plot, just not directly but through Saiki instead. Naturally, Saiki seemed to be his usual self but with a more active attitude towards the acions of his so called friends (LOL), in other words, a bit less passive. The cherry on top would defintely be the last episode. Overall this anime secured a permanent place in my heart and I would definitely recommend this to my fellow anime enthusiasts.

I really liked the first three seasons and was excited when they revealed Reawakened, but i was a bit diaspointed. The actual point of Reawakened to my knowledge was supposed to be about Saiki loosing his powers, but even though they did have some episodes, it was left at a cliffhanger, with the actual plot left for the end. Though the two new characters they added were great and i enjoyed them but the voice acter change was a bit off putting, hope that they fix it for next season.

a bit difficult to follow and not as good as the first 2 seasons but still v enjoyable and will watch again !! :D

inspired me to read the manga to understand it better though, so maybe that's what they were going for ahaha

Well this time around they sure got the “Disaster” part right.

While the stories in previous seasons were random, they were at least pretty original, funny, and smart. This time around everything was just bad. Many of the stories were just awful retellings of jokes from past episodes, and they’d harp on the same little goof over and over in ways that show they weren’t even trying. The worst part was none of it was even slightly humorous, which is amazing since past seasons were really laugh out loud funny.

I also get where they were going with the last episode, but it was just done in such an awful way, that was again very unfunny, and not at all interesting.

While the animation for, the most part, was the same, there were a few instances where it looked as if they had given it up and were just phoning it in. They also kept the locations small, so we were in pretty much the same two or three places throughout the short season.

So for those who watch this in its dubbed format, the show is somewhat jarring. Since Netflix took the show over from its original importer, they decided to use their own crew of voice over actors, which just comes across terrible.  Each voice sounds similar to the one from the Funimation dub, but just multitudes worse. They sound more like someone trying to explain the voice of the v.o. artist, instead of the actor themselves.

Secondly the people they chose to cover the voices just can’t act. They have absolutely no comedic timing, so none of the jokes ever land correctly.

They even found ways to ruin some characters that everyone loves during this ill-conceived money grab, errr reboot.

Saiki may have always seemed uncaring, but throughout the show you saw that he did have feelings for most of the imbeciles around him. This time he just often felt like he was being a jerk and was truly just selfish. For part of the show the same almost seemed true for Nendo, where some of his goofiness was replaced by just being unkind.

Most of the other characters were just made as blander version of themselves from the older shows, with nothing new being added, and most of their time being spent repeating whatever happened to them previously.

The original series, at least in its dubbed format, was an almost perfect anime comedy.  It melded a great story, hilarious comedy, lovable characters, and very good side plots. This on the other hand had absolutely none of those, and even at six episodes felt like a giant waste.

* The ending looked like it could be interesting, but did end up predictable.

* Almost every plot and joke was just a bad version of one from the first season.

* Although regional, the new V.O. was just terrible in sound and acting.

* Characters all lost their spark from previous seasons.

Ways to make the show better:

* Don’t just rehash past jokes, knowing we found them hilarious before.

* If you do it right, expand beyond six episodes.

* Don’t allow anyone from Netflix to touch it, they’re almost as poisonous as Cartoon Network.