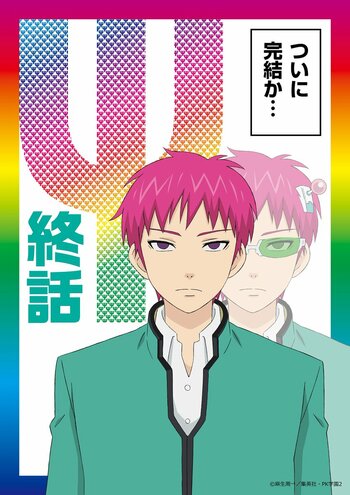 If you're looking for anime similar to The Disastrous Life of Saiki K. 3, you might like these titles.

Continuing to exist in a perpetual state of despair, Nozomu Itoshiki is still trying to teach his students that the world is never as good as it seems. From discussing the ridiculous hold that superstitions have on mankind and people’s hidden switches, to society’s refusal to accept more than one outstanding talent in any given individual, no topic is safe from the Itoshiki treatment! Forever becoming caught up in his students’ momentum, this time Itoshiki-sensei finds himself joining a group travelling to Hokkaido on a journey of self-discovery, acquiring his very own body double and getting lost in a city of dicey third choices.

Mob, Reigen, Dimple, and the newest member of the Spirits and Such Consultation Office staff, Serizawa, take a trip up to a secluded hot spring called Ibogami Hot Springs in Zebra Prefecture. Reigen happened to get a request from the matron there to discover the truth behind the strange rumors going around there and save the inn. Ritsu and Teru also join in on this trip and the six of them head out on this super relaxing trip to the hot spring. But on their way there, Reigen and Serizawa start nodding off on the train and somehow get sucked into an eerie parallel world...