The Disappearance of Nagato Yuki-chan - Reviews 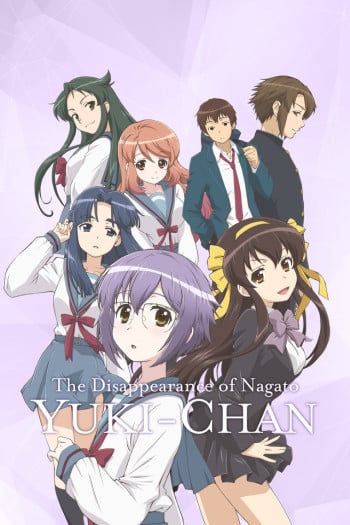 Are u ready lads and gals???Are u here by mistake?Then please go ahead and drink some absinthe and get a nice blackout..Forget u ever got here..For the rest of us who saw the whole damn franchise and ended up here waiting for something better than the endless 8 fiasco...OH DEAR LORD DELIVER US FROM EVIL.

Let's kick off with the animation shall we?It's eye watering bad.For some reason the studio thought in their infinite wisdom to not bother at all it seems..Kinda sums up the whole anime in fact but we'll get there soon..Some characters,like say Haruhi are exactly perfect,just like u remember them from the previous efforts...The rest,like say Kyon are like they were drawn by me..And i really suck at it..I can't draw a fuckin circle for god's sake.And that's ok cause i don't have anything to do with animes...But a studio making such a big huss of it..Oh yes it's a big deal.

Storywise i can't explain what might have happened..I mean with the movie things seemed to be on the right track..This is bland,no hooks,nothing to keep u glued to the screen..In all truth i couldn't tell it apart from the crappiest romance ecchi anime..And here is the thing..With crappy ecchi animes u know what to expect..This is supposed to be,according to some idiots called fans the second coming..Let me tell u here and now that it isn't..Or if it is indeed the second coming i looks suspiciously like a dog parting its' breakfast..

Onto another glaring issue..The voices and the movements of the lips were out of place..I think there were times where sound was reaching my ears and the the characters were following much later..Characters.....Onto the last straw...The only hook in this anime was Haruhi..Every character is watered down.It was like watching them sky diving without safety equipment.Sure some characters are getting more screentime but if u take all the good things out of every single character and throwing them in the bin and neutering them in the process what good does it do if one or 2 characters got more screentime..

I'm not being captain horrid here..This anime sucks..Just like that.

This is the third part off a 3 part review of the Haruhi Suzumiya franchise.

*So I liked again that this spin-off is very intertwined with both the movie and the original anime with lot’s of references to both of them.

*I also liked the fact that some characters that we don’t get to see a lot in the original anime like Asakura and Tsuruya now get a lot more screen time. Asakura is even one of the main characters of this anime.

But let me tell you something, I was quite excited for this anime because my favorite character Nagato would be the main heroine and it would take place in this super interesting alternate universe so what could go wrong?

Well a lot it seems. Let me just dive straight into everything that I disliked about this anime.

*Speaking off the characters: What did you do to my beloved Nagato? Yes I wanted her to have more emotions and feelings as in the movie but not like this. In this spin-off she’s just plain dumb and it bothered me from the very first episode.

*Next up: the story. I’m still searching for the main storyline in this anime. When I got to episode 11 I thought that the main story was finally starting but about 3 episodes later it’s already finished and we return the same boringness that were the first 10 episodes. What a waste of a good opportunity to write an interesting storyline.

*And the end of the anime topped it all of. What was that ending? When the anime ended at episode 16 I didn’t even notice that it had ended. I only found it out 2 weeks later when I was making my schedule for september and I was looking at Anichart when which anime would end.

There I saw that Nagato had ended at episode 16 and I was like What? This is the most bizarre and random ending I’ve seen till today. And than there was the scene after the final credits. What was that all about? This isn’t really a spoiler so keep on reading. That scene is the exact same sequence that we get to see at the start of every episode of the Endless 8 so I don’t get it.

*But my biggest problem with this anime was that it didn’t delivered what it promised. I think every Haruhi fan went into anime thinking Yes finally we will see Kyon and Nagato get together and form a couple. And that doesn’t happen, they don’t become a couple. What was the whole point of this anime if you don’t for fill what you had promised the viewers?

So as a conclusion, I was so disappointed by this anime. It was so extremely boring that I didn’t even noticed it had ended at episode 16 and it didn’t deliver the romance that we were hoping for. So I’m going to rate The Disappearance of Nagato Yuki-chan at 1,5 stars.

My advice is: watch the original anime so that you can enjoy the movie and just forget this spin-off. 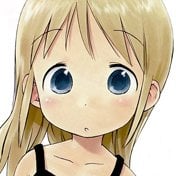 While watching the first few episodes I honestly thought I was watching a very clever parody. The way the intro was done utilizing every cliché you can think of. The way the show feels like the most generic highschool-comedy-slice-of-life-romance-drama anime. The redesign of Kyon turning him into the same milk face that is the male protagonist of almost every anime of this type. How clever is that! Then, after a few episodes there would be an ingeniuous twist that it was all just one more of Haruhi's whims. Kyon would look like his true self again and the characters would stop acting like it was cheap fanfiction.

Then I realized that they are actually dead serious.

Haruhi always used to be a relatively clever anime, known for doing unconventional things such as the order in which the original series aired or the endless eight. Then there was the phenomenal Disappearance of Haruhi movie. Also, the entire Haruhi premise is based on appearance and reality. The superficial part of the world which Haruhi perceives and all the stuff that goes on behind the scenes, the part that made the anime interesting in the first place. By taking away the backstories of the characters they robbed them of half their personality and turned them into blueprint stereotypes. The best part of this was the OVA, which really was all the attention this alternate universe scenario deserved.

TLDR: Stripped of all dignity with a dumbed down Haruhi cast slapped on. Only for hardcore fans and comedy/romance/slice-of-life fanatics.

I was expecting a little bit more from this. I watched The Melancholy of Haruhi Suzumiya some years ago and honestly I don't remember much, except that I didn't dislike it. I guess I was attracted to the title, sounded like something Lovecraft would write, dark and mysterious. So I watched the show waiting for the moment Nagato Yuki would disappear, maybe whisked off to some parallel world; and waiting patiently for it to get more interesting - I had to wait till episode 10 (out of 16) for her to disappear; and, sorry to say, but it didn't get more interesting. And anyway after 2 or 3 episodes she comes back. So no cause for concern.

I'm not saying it's bad, but really there's nothing we haven't already seen, million of times: shy girl who doesn't have the courage to even talk to her fellow students and needs the support of her friend to get anything done but somehow managaes to attract male protagonist who uncomprehensibly falls in love with her even if she does little more than play computer games all the time and blush and stammer when he talks to her. I won't say what the "disappearance" consists of otherwise I'd spoil it, but in the end it's nothing to make an anime out of.  So the story is lacking.

The characters are not original in the least. I didn't find Yuki or Kyon particularly interesting or endearing. There is pitifully little character development. The relationship between Yuki and Kyon reminded me a lot of Acchi Kocchi, an anime that I dropped after five or six episodes as the only thing I could say about it was that it is cute. Nothing else. That particular brand of Japanese cute, kawaii, that if you watch anime you must surely know about. Same here. Yuki is cute. And not much more.

The side characters are maybe slightly better built and presented: Asakura, Haruhi, Tsuruya, Asahina all more or less liven up what would otherwise be an incredibly boring show if left only to the two main protagonists.

Animation and sound are good.

Overall, it is watchable. But if you've seen a lot of anime I wouldn't recommend it. Nothing much happens, so it's supposed to be a character-driven anime, but the characters aren't that great, already seen them elsewhere. The pacing, it goes without saying, is slow. 16 episodes is too long for a story like this. There's a lot of filler, too.

I see from other reviews it is joined with other Anime which can make this one more meaningful.  I watched this one on its own and haven't seen the others.

This is another romance where the characters never gets together.  I always feel disapointed by anime that do that.  They like each other and people around them know it but they never do anything about it.  If holding hands is enough for you to watch a romance then go for it because it is a well made anime.