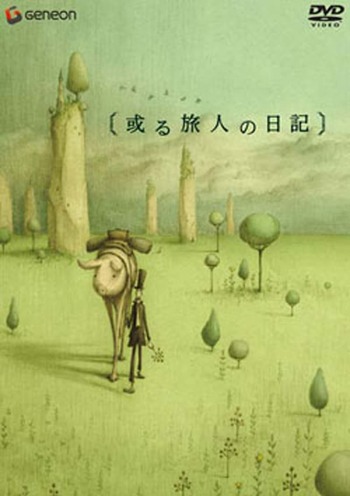 Story
When I first picked up Diary of Tortov Roddle, I had no idea what it was about. Studio 4C is my favorite studio and the group JollyRoger has put out many of their works and shorts. Thus, when they released this newfound gem, I knew I had to watch it. Luckily, it was just as good as I had hoped it would be.

Shown with no dialogue whatsoever (except the printed words of Tortov's diary), Diary of Tortov Roddle follows a thin and wiry man named (you guessed it!) Tortov Roddle, on his adventures through whatever mystical land he inhabits. We are treated to six different quiet adventures, including visiting a land where a movie is being projected on the back of a giant bear. This might seem comical, except the fact that Tortov himself has a giant spindly pig as a companion. Throughout the six locations we are shown, there are beautiful landscapes to be seen, beautiful discoveries to be made, and in general, a beautiful and quiet story.

Admittedly, Diary of Tortov Roddle probably isn't for everyone. Fans of Kino no Tabi will eat it up with a spoon, and will surely think Diary's positive stance is a refreshing change from its melancholy alternative. But some folks might think it's too boring, too slow and has too little action to appreciate it. Indeed, it is all of those things (except boring, in my opinion), so there probably are people that wouldn't enjoy it. On the other hand, I left the viewing with a sense of childlike wonder and excitement, so I feel that, in a way, there's something for everyone with this anime. Though only sixteen minutes, I was genuinely interested the entire time and wanted to see more.


Animation
Truly, Diary of Tortov Roddle is one of the most interesting and beautiful things I've seen, largely in part because of the unique and interesting art style. Imagine Tim Burton, Cat Soup and a dash of color combined and you can probably imagine the art. Characters are spindly, tall or overgrown, with mild expressions. Backgrounds and scenery are beautiful and comprise the majority of the anime, showing us everything from striking lit up cities at night (carried on the backs of frogs, no less) to a wonderfully drawn cafe with a mysterious visitor in the coffee cup. Imagine Kino no Tabi with more color and a more abstract look. The animation style itself is very minimal and looks like pieces of paper are simply being flipped consecutively and quickly. This interesting style along with the already unique and wonderful character and background designs makes for a fantastic viewing experience. The point of Diary of Tortov Roddle, I believe, was to portray a sense of wonder and excitement, and the animation truly helped make that happen. In a way, watching this reminded me of playing Spleunx back in the day, or an early Myst.
Sound
Hands down, the music sounds like it comes straight out of Amelie. Or, for that matter, anything directed by Jean Pierre-Jeunet. Accordions abound and a light piano melody accompanies the other instruments, in general creating the perfect atmosphere for the lighthearted story. I can't think of how better music could have been created for the mood of this anime, and am glad they went with the unusual instruments for the soundtrack.
Characters
It certainly is difficult to try to review the characters in a sixteen minute anime -- especially since there's no dialogue -- so I'll make this brief. The two main characters are definitely Tortov Roddle and his meaty companion. I appreciated both of them, if only for their appearances and quiet actions. In each episode, additional characters are introduced to us, but are only around for the same episode they are introduced in. The giant bear and his trainer are an example, as well as the lovely girl with a flower. Although no dialogue is exchanged between any of the characters, we still can see their communication on an unspoken level. In general, I really enjoyed the characters. Their quirky nature and odd appearances made them all a delight to see, even if it was only for a few minutes for each character.
Overall
I really enjoyed this set of shorts. While some silent anime bores me, Diary of Tortov Roddle did just the opposite and was intriguing. Each short clip will remind you of adventure games or interesting dreams, or anything in between. Though hardcore action fans might not be able to appreciate this as much as others, I still think it's worth a watch, even if only once. Who knows? You might walk away feeling just as refreshed and jovial as I did, and that's never a bad thing. Pick it up, watch it once, and revel in the imagery.

This is a collection of very short vignettes with fantastical imagery in a fantastical world with mute and mostly static characters/environments. Personally, I got very little out of this because I'm not a fan of the aesthetic style/philosophy of solely depending on surrealism and man-made concepts as intrinsically meaningful things, and there's not much else going for this work.

Tastes in artstyle and ambiance are something that is different for each individual. I’ll write this anime from my perspective, but if the screenshots in the Anime-Planet entry were already raising doubts at your end, don’t bother.

The Diary of Tortov Roddle is a series of very short stories of 2-3 minutes each. They show the peculiarities Tortov comes across as he travels through his fantasy world, riding around on his Dali-like pig.

While the short stories are interesting by themselves, what made this little show so enjoyable was the art. Made by the same creators as the Oscar-winning La Maison en Petits Cubes, Tortov is completely hand-drawn and makes good use of surrealism to create its world and story.

There’s not a huge audience out there who are into this kind of style. To those who are however, The Diary of Tortov Roddle is a must watch. It’s very short and jumps up and down a bit in quality towards the ending, but frankly, I didn’t care. Enjoyed it from start to finish.

A common misconception about animated shorts states that they, bathing in creativity or not, never reach the same heights of storytelling as full-length features. While it's true that there's little room left for plot devices and character development if you happen to have a running time that doesn't even surpass half an hour, I still find this notion absolutely ridiculous. Rather than observing a short film and condemn it based on the lack of things you'd find in a movie, I've always been under the belief that the approach itself needs to be changed in accordance to the runtime. Hopefully, viewers who happen to come across the subject of today's pointless scribbles will have their perception of animated shorts changed by the beautiful, mesmerizing and absolutely "pointless" creation that goes under the name: The Diary of Tortov Riddle.

Now, visually speaking this little eccentricity plays out exactly like one would expect the incestuous offspring of Tim Burton and Cat Soup to do; character designs tend to be tall and slim; the color palette is muted to the extreme and there are enough semi-artsy oddities to give Yoji Kuji an orgasm. Story-wise though, the atmosphere seems a lot more inspired by Kino's Journey as the protagonist of the film, Tortov Riddle, travels on a pig with extraordinarily long legs, facing various encounters with other creatures as well as experiencing various strange things. His travels are documented in his diary which is shown at certain points, usually at the end of each story. Unlike Kino’s Journey though there are no fables or general lessons in morality to be found. Tortov is merely a lonely traveler whose motivations are never revealed and who seems to treasure his bizarre encounters more than anything else.

All in all there are six stories that together create a running time of approximately 18 minutes. These minutes are well spent on beautifully surreal artwork that depicts everything from Tortov's encounter with a mysterious woman to a town hosting a cinema party by projecting an animated movie on the back of a peculiar bear-hybrid thingy. Keep in mind that few of the stories have actual conclusions and there is no continuity to find whatsoever. The best way to enjoy it is to take in the beautiful but simplistic visuals as well as the equally harmonic soundtrack that relies on everything from pianos to more unusual instruments to establish a dreamlike feeling few other movies manage to invoke.

The world of animated shorts suffers from an over-representation from the admittedly masterful Makoto Shinkai whose Voices of a Distant Star continues to rightfully mesmerize. However, in recent years it's become quite apparent that there are other creators out there producing shorts that reach an almost similar kind of quality. The Diary of Tortov Riddle was directed by Kunio Katou who later went on to create the Oscar-winning La Maison en Petits Cubet which I also recommend. However, inside the realm of anime shorts, that I have explored somewhat thoroughly, Tortov Riddle stands out as one of the better creations I've seen. It's able to invoke a strange feeling of an almost childlike wonder that makes you absolutely content just witnessing the peculiarities the film exhibits rather than questioning them. Sleep is never an easy thing for me, but after I finished watching this for the second time I fell asleep almost immediately and although I can't remember any of my dreams I'm sure they were quite pleasant acid trips from the fascinating and beautiful world of Tortaria.