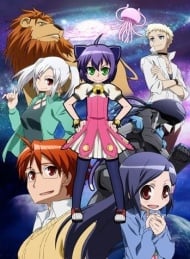 Once upon a time, a creature named Enka tried to destroy everything on Earth. It was eventually slain by humans; but before dying Enka proclaimed that one day its child would return to the planet, spreading fear and despair throughout all humanity. Now, thousands of years later, DNA tests have identified six 'children of Enka'. Only one of them is dangerous, but nobody knows which one (and killing them all would be mean!) Instead, 'Operation Cozy Family' is born! Normal human Ouka Midarezaki is forced into marrying Kyouka, one of the children of Enka; and together they play the roles of 'father' and 'mother' for the other children. But will family bonding and love really be enough to prevent the destruction of the planet?

StoryKyouran Kazoku Nikki roughly translates from the Japanese as "Frenzied Family Diary". As family diaries go, it's certainly more frenzied than the diary of the Swiss Family Robinson or the diary of the lot from Lost in Space. In fact I can barely think of a better phrase to describe the series. It chronicles a family who are frenzied, partly as a result of their hasty composition, and partly as a result of the peculiar universe which serves as their home. So, fair play on the title, at least. The majority of the show is a series of almost stand-alone episodes, each of which seem to introduce a brand new character or two and then discard them just as quickly. The result of all this is jarring and off-putting, as if Kyouran Kazoku Nikki has been stricken by some rare case of Mulitple Personality Disorder. Is it a single story with arcs and tangents or is it a bunch of one-shots? The answer remains vexingly unclear, and the anime does everything in its power to befuddle both the viewer and itself on the matter. The start promises a central story yet the following episodes each shrink further and further away from this heady ambition. The trouble is that, when the deep story finally does come, it's unexpected, unwanted and practically awkward. It's like waiting all day in anticipation of a surprise birthday party which never materialises. Eventually you decide to give up waiting and watch some porn instead, when suddenly your door swings open with close friends and family holding a birthday cake and yelling "surprise!". At that point, it doesn't really matter how good the cake tastes, you're going to wish it had never made its way into your life. For the record, Kyouran Kazoku Nikki's cake doesn't taste all that great anyway. Its final asthmatic puff of a story revolves around three characters who are introduced in the last few episodes of the series and the resulting sensation is much like watching a sport you don't understand; it's hard to follow and harder still to care about the outcome. I think the future of the world may have been at stake, but was given no real cause to fret about its potential destruction. Having not read the manga, I cannot judge it as an adaptation, but I would venture to say that the pacing is more than a little off.AnimationThe animation is generic but not terrible for it. That said, it never seems to let go of a pastelly, far-away feel with bright colours throughout and detail largely glossed over. While the animation is very nice in some places, nowhere does it truly grab the viewer's attention or leave an impression. It is adequate rather than momentous and thus in-keeping with the show as a whole. All things considered, I had not expected a graphical tour-de-force - the show has no need for one - so the colourful and distinctive characters and locales were sufficient to leave me satisfied on this frontSoundSoundwise, I offer no honest complaints. The opening is catchy and majestically in-keeping with the series' mood whilst a total of eight different ending themes are used. With variety like that, the fact that they're mostly pleasing is mere icing on the proverbial cake. The background music is solid, appropriate and comprises a couple of very good tunes, which consistently add to the action on the screen. The voice acting is equally solid. I suppose I could accuse a few of the characters of resorting too easily to clichéd and exaggerated tones. However, that would be unfair of me, and I would be ignoring the fact that Kyouran Kazoku Nikki's plots and protagonists rarely call for anything more ostentatious than the simple delivery provided. The voices are vivid and distinct enough to be memorable but not so much as to be irritating.CharactersThe cast of characters is necessarily where the the anime takes refuge. Although it is not strictly a character comedy in the mould of Lucky Star or Azumanga Daioh, its prevailing motif is something like "wouldn't it be awfully interesting if a varied and distinct bunch of personalities were all put in the same family?" Because of this, and in spite of a sitcom-esque use of improbable and unexpected events, the comedy and intrigue are motored by character interactions. More often than not, this generates the best moments of the anime. Be it someone's reaction to Kyouka's seemingly coke-fuelled antics or be it a pearl of wisdom from an unexpected source, the "human" (inverted commas necessary) drama of Kyouran Kazoku Nikki is what truly shines through. Each of the characters has a concisely exposed backstory and certain defining personality characteristics, which will have them residing in the viewer's memory long after the confused plot has been forgotten. Teika is affable, Yuuka is adorable, Ouka is admirable, Kyouka is... completely bloody mental. The list goes on. The individual characters aren't so much developed as they are explored. Whilst everyone finishes the show with more or less the same personality they had at the start, the achievement of Kyouran Kazoku Nikki is that it enlightens the viewer as to deeper and unexpected facets of each individual's psyche. And I think it does so rather well, give or take a quirk.OverallIn all, this is a difficult series to judge. Although it left a bitter taste in my mouth, I remember truly savouring the earlier episodes, so allowing the perceived slight of a rushed plot to colour my view of the show as a whole would be unjust and undeserved. If you have very little time left to live and are looking to watch the defining series of anime, then I would recommend giving this show a most unequivocal miss. Alternatively, if you are after some relatively light-hearted fun and have run out of things to watch, you could do worse than give Kyouran Kazoku Nikki a try.

The story is great, the comedy is awfully fun!! The story is a bit unclear but the anime is funny and great. I love the "Parents"and their "children" XD Great anime love it! also kyouka is a bit mean. 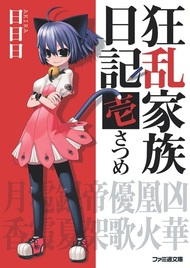 The Diary of a Crazed Family (Light Novel) 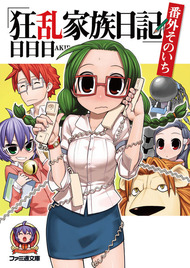 The Diary of a Crazed Family: Bangai (Light Novel) 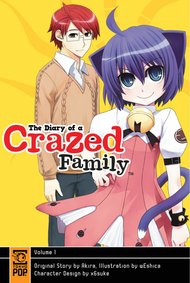