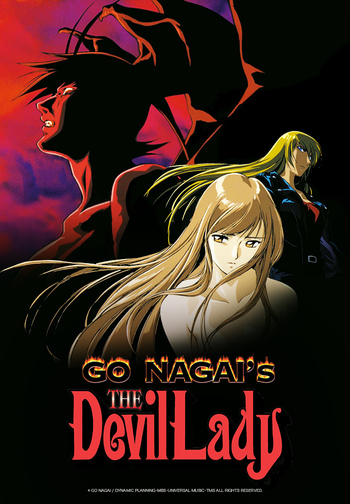 The Devilman series is old, long running and very well known, and was created by the (in my opinion) sexually frustrated Go Nagai. I can’t say I’ve been a fan of any of his series, including Devilman, but I had heard the plot for Devilman Lady was quite good; thus, I decided to check it out. I can’t say I’m too happy I did.

Unlike the other series in the Devilman universe, Devilman Lady takes an entirely new approach towards where the demon powers come from. In Devilman, the source is an ancient demon whose soul overtakes the body of its host. In Devilman Lady, without spoiling, I’ll say that the powers are much more general in nature and afflict a variety of people, including the protagonist, Jun Fudo. The overall premise is that Jun Fudo, a successful model, is introduced (in a jarring fashion) to the fact that she has the power of the Devilman within her. She is recruited somewhat against her will to battle other beasts that have a similar power. Ultimately she finds her human soul is in danger of being lost forever, and the beast count continues to rise.

I’ll sum up Devilman Lady in one convenient word: yaaaaaawn. Like Vampire Princess Miyu TV or any other monster-of-the-week series out there, Devilman Lady is mostly constituted of just that: monster-of-the-week episodes. In each episode we see Jun battle a new beast. In addition, we are subjected to a very high frequency of flashbacks. See it once, interesting. See it twice, curious. See it fifteen times, annoying. Once the series reaches the last few episodes a stronger "plot" is revealed and Jun ends up battling some uber villains ala X TV-style (with an Eva-type cameo as well), but this slightly more interesting story still doesn’t manage to save the series in any way. Overall I found the story to be boring, generic, and nothing out of the ordinary.

Finally, what would a Go Nagai series be without blatant and excessive ecchi or violence? For quite awhile I was convinced that maybe for once, I wouldn’t be irritated with something in a Go Nagai anime. Then it got to a rape scene, and all my hopes were shattered. Oh, and let’s not forget the nonstop lesbian innuendos going on for literally the entire series, with most of the female characters. Come on buddy, can’t you write a decent story without throwing in rape, lesbians, or some form of disturbing violence?

For something that was made in (basically) the 21st century, I’m not seeing why the animation and character designs ended up being so shoddy. The crude designs and coloring reminded me more of something from the late 80s than 1999, making me wonder what was going on. In typical Go Nagai fashion, any beast or creature that is female has to have gigantic breasts (even if the creature is some sort of giant furry beast... wtf, how can beasts have boob jobs?). Jun’s beast transformation is hideous, but then again I don’t like how Devilman looks either. The faces are too wide, the colors are too drab and in general I wasn’t impressed. I will say that some of the monsters, however, looked very neat (such as the vampiric main villain near the end). In addition, the excessive bloody scenes were entertaining.

Though the music seems decent at first, it quickly spirals downward into "ok, I’ve heard this 8 million times already" land. The main theme song is an odd orchestral track with a choir of sorts singing in I think Latin? Or Italian? Regardless, a neat idea, but overplayed way too much. The rest of the tracks were entirely forgettable. Both the Japanese and English voice actors were fairly lacking, with the English dub adding scripted lines such as "don’t you now" to the ends of sentences, and of course the usual mispronunciation of Japanese words ("Kantou" being read as "Kantoo", for example).

Any time there’s a monster-of-the-week series, usually the characters end up sucking due to lack of exposure or too much exposure of a wide variety of characters. Even though I found Miyu TV to be utterly terrible, at least the daily monsters had their coolness. For example, the mannequin (err, I might be botching the thing in particular) creator. Devilman Lady’s monsters were 100% forgettable, and usually was just some random beast person who Jun had to battle and kill. The ultimate bad guys are a little more interesting in theory, but ultimately seem just as flat as all the other characters. Jun’s friend is incredibly obnoxious and weak, and I got sick of her quickly. Jun in general doesn’t spark any sense of empathy in me; she’s too bland, drab, and unmotivated for my tastes. Poor characters all around.

Overall, I’m sorry I wasted 13 hours of my life on this series. Though monster-of-the-week fans might eat this up with a spoon (especially if you like other Go Nagai titles), you might enjoy this. Otherwise, I can recommend some far better monster-of-the-week series including Silent Mobius. The animation isn’t up to par, the audio is marginal and the story is quite weak and unoriginal. Though the average of the above scores would suggest higher, I'm rating this a 2.5 simply because of how much of a waste of time it was. Steer clear of this one.