The Detective Is Already Dead. - Recommendations 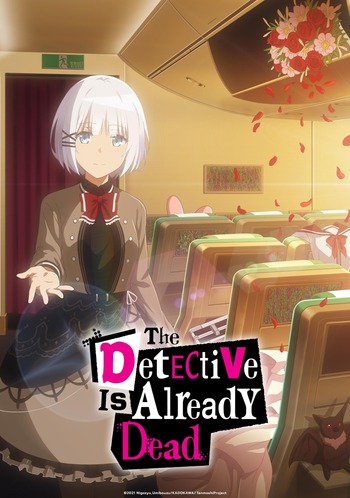 If you're looking for anime similar to The Detective Is Already Dead., you might like these titles.

Both touched by spirits called yokai, Kotoko and Kuro have gained unique superhuman powers. But to gain her powers Kotoko has given up an eye and a leg, and Kuro’s personal life is in shambles. So when Kotoko suggests they team up to deal with renegades from the spirit world, Kuro doesn’t have many other choices, but Kotoko might just have a few ulterior motives…

Supernatural mystery themed, has a lead female that drags in a reluctant male sidekick to solve the cases with her. Also has a minor romance sub-plot forming between the 2

Tokyo is on edge due to a rash of recent killings targeting Butei - armed mercenaries that perform odd jobs and capture criminals. So when Kinji, a student at a local Butei high school, heads to class one day and discovers a bomb has been rigged to his bike, he’s certain he’ll be the next victim. That is, until Kinji’s elite classmate Aria saves his life, inadvertently triggering his superhuman ability that flares when he’s sexually aroused! Though Kinji would rather slack off at school and be left alone, Aria is now determined to make the teenager her slave, fetching her food and partnering with her on missions - including one very important to the girl. And nothing will stand in her way... not even Kinji's possessive childhood friend!

Both are anime about detective. Both main male character are act as helper for the main female character. They both have supernatural, a bit of romance and fighting sense.

Both are good mystery shows with a touch of suspense. If you are drawn to the mystery genre, it’s definitely a must-watch.

When you can remember, they're kind of different and centers around two main characters who solve crimes and mysteries to investigate.

Saitou Yakumo is a young man with a very special gift: he can see the souls of the dead and communicate with them. When the aloof student isn’t duping his fellow classmates out of their money with fake card tricks, he takes on paranormal cases that pique his interest. Making use of his unique abilities, logical mind and his contacts within the police, Yakumo strives to solve each supernatural case he takes on and bring those responsible to justice. But when the youthful detective becomes the target of a sinister duo can he get to the bottom of their scheme before he is dragged into a world of darkness and hatred?

Disowned by his father, Juugo Yama has run away from home to the island of Nanae. He begins to live by himself, only to discover his room is haunted by the ghost of Nanana Ryugajo. She was murdered ten years ago, and her killer must be found before she can rest in peace. Before her death, Nanana collected things from all over the world and hid them throughout the island. Using the mysterious powers of these hidden items, they should be able to find the culprit. As Juugo begins his hunt for her collection, however, he discovers he's not the only person searching.