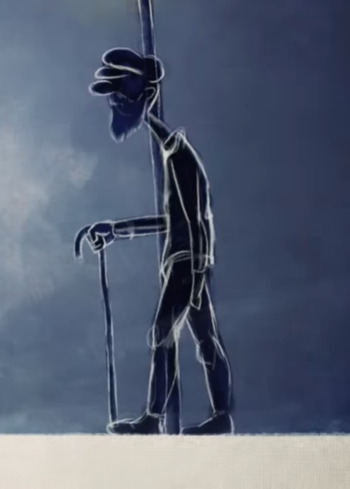 The film is set in China, in the 1960s. An old woman cools herself in the garden. The sunset makes the sky orange. Sunset flower starts to bloom. The flower guides her to daydream. The woman dreams of childhood memories and when she was young and beautiful.

Through persistence, a woman finally wins over the man that she loves. But despite the joy of their life together, the troubles he experiences at work creates a distance between them that does not abate - even as they grow and raise a family together. As the woman weakens with age, all that the man did and did not do comes back to haunt him. Yet what can he do for her that will be meaningful even in the face of the ravages of time?

An old couple lives in a Japanese village. They make blooms for living. They have been together for life and work for a long time. Recently the husband noticed the wife has had some symptoms of the disease, which caused some obstacles in their work

It is the day of wake of the Grandpa. Grandma is alone in her room looking at the album full of memories with him. “Are you sad, Grandma?,” asks the boy. She replies her grandson merrily with jokes. In the meanwhile she falls asleep and in her dream she meets a man and makes a promise with him….

When the cost of taking care of the elderly becomes too high, why not invent a robotic, nuclear powered bed that can take care of them for you? Sounds logical, right? The government thought so too! But when they nominate Mr. Takazawa without his approval as the test subject, they underestimated the determination of his nurse Haruko to step up in his defense. After all, what is a dedicated nurse to do when she suddenly sees her name on every computer screen asking for help and the bed with Mr. Takazawa in it actually transforms, gets up and follows her back home?! Add a lot of police, an angry government agency, a bunch of elderly over-sexed hackers and a trip to the beach and the mayhem is complete!

The official music video for sign from the album Discovery, by amiinA.