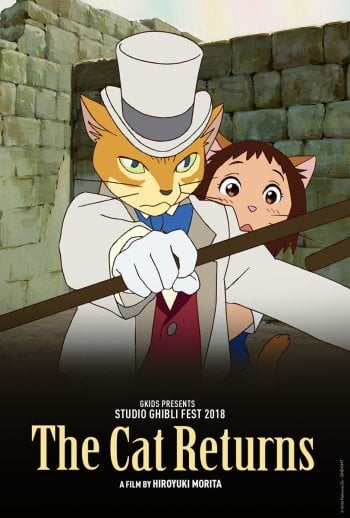 I’m pretty sure Ghibli is one of the only studios on earth capable of taking a storyline like this one’s and making something worthwhile out of it. The plot has a kind of meandering, silly quality to it that could easily have turned to tedium, but no; from the seemingly boundless resources at Ghibli’s disposal, the studio makes the movie work as a creative, lighthearted, and ultimately endearing show.

Admittedly, the anime lacks some of the heartfelt poignancy found in some of the Ghibli’s better works (ie. Whisper of the Heart, My Neighbor Totoro, Spirited Away, etc.), but it’s difficult to fault a studio for occasionally making a movie that ISN'T incredibly ambitious. Like in Porco Rosso, another one of Ghibli’s somewhat overlooked films, the studio doesn’t try for a whole lot of deeper meaning, but manages to be fun anyway.

A primary, very simple joy of this anime can be found in the reappearance of the two characters from Whisper of the Heart. In WotH, The Baron was an immobile figurine, but played an important part in the main character’s spiritual growth. Here, he’s a fully fleshed out character, a lithe and haughty little creature who sparkles with originality. Along with his partner, Muta (also dramatically changed from WotH), they provide an excellent backbone to the show, and prevent the sometimes shaky storyline from ever becoming dull. The main character, in standard Ghibli fashion, is very likeable, albeit somewhat unmemorable.

The entire show is bright and colorful, with the standard attention to detail that Ghibli is so well known for. Character designs (excluding the traditionally normal protagonist) are memorable and quite excellent as a whole. However, compared to Spirited Away (which came directly afterwards) or Princess Mononoke (which preceded this), I was somewhat disappointed. The animation is still good, but just isn't quite as amazing as I've come to unfairly expect from the studio.

Sound as a whole is good; the background music is good at being exactly that, and the voice acting is noticeably above average (unlike Gambit at anidb, I absolutely loved The Baron's voice).

I’d definitely recommend that you watch Whisper of the Heart first; I got a lot of enjoyment out of the cameos, and WotH is quite simply a better film. However, even if you haven’t seen WotH, this movie is still well worth watching; there are plenty of laughs to be had, and The Baron is the coolest feline with a cane that you will ever see in your life, regardless of whether you know where he comes from or not.

Before watching this anime, please watch Whispers of the Heart first. It technically preceeds prior to The Cat Returns and it is such a wonderful story as well. Studio Ghibili delivers another beautifully written story - a warm, lighthearted and endearing classic.

And one word...Baron. There is something about that strapping dapper of a cat, so ruggishly handsome and elegant. I could talk about his ravishing demeanor but that is another story all on its own.

This anime is a bit different than the others that Ghibili has produced. It has comedy elements and though it may lack a bit of the heartfelt components that we are known to feel in their other works, it still delivers lovable characters and a charming story.

Haru is a normal high school girl, trying to find herself and learning to become more confident. On her way home from school, she ends up saving a cat from being ran over. To show gratitude, the king of all cats deliver gifts to her in honor of such a good deed. Eventually, she gets catnapped due to a miscommunicated agreement and a whole adventure unwinds as she starts becoming a cat and seeking ways to get home. The baron, brave and noble, rescues the lass and tries to help her get back home.

Considering that this film is in the early 2000's, the animation is crisp, colorful and vibrant. The detail is still exquisite, just like the other works produced, though if you compare it to anything after, it may fall flat.

The sound is pefectly fine and the background music is fitting. The voices selected for the characters are spot-on and oh, that Baron! His voice alone...

The characters are well designed and you grow to adore a few of them - Haru and her growing up to the experience of life; the Baron and his ravishing, honorble, charming appeal and Muta, the big, cuddly, comic-relief, brave sidekick.

You really cannot go wrong with any of Ghibili's works. This anime is endearing and a cute, adventurous story. There are plenty of laughs to go around and who does not want to see the coolest feline with a cane and British accent, eloquently speaking? Just saying...

The Cat Returns is an adorable film. The characters are made very well. The story line is amazing. Of course I’d recommend this film anytime. Thank you Ghibli Studios

The Cat Returns is essentially a spin off of Whisper of the Heart. Yet it only features one common character - The Baron.

The story follows Haru, a sweet yet disorganised and clumsy girl. After saving a car from being knocked down, she learns he is actually The Cat Prince, Lune and is then showered in gifts by his father, The Cat King.

Though what the cats consider gifts aren't really Haru's cup of tea - thousands of live mice and a whole garden full of cat nip for example. And then she learns that she's been invited to The Cat Kingdom to marry Prince Lune too! As if a human marrying a car was no big deal.

A mysterious voice tells her to go find The Bureau - which she does. There she meets The Baron, a large raven called Toto and a grumpy fat cat called Muta. And together they agree to protect her from The Cat Kingdom. But things don't go to plan and she's kidnapped and taken there anyway. Though it's not done maliciously, the cats who "kidnap" her do genuinely want to please her.

Once in The Cat Kingdom, Haru starts to change into a cat and suddenly the idea of her marrying Prince Lune doesn't sound so far fetched anymore.

The Baron arrives to rescue her from The Cat King - I really hated him! But he traps them in the maze and later destroys The Tower to Haru's world. It's not until Prince Lune returns from battle that his father stops. He tells his father that he's in love with another - a beautiful white that Haru saved as a kitten when she was a little girl. She also happened to be the mysterious voice that told Haru to seek out The Bureau in the first place.

However, The Cat King is still obsessed with Haru and decides to make her his bride instead. Though she manages to escape to her own world with The Baron's, Muta's and Toto's help. Defeated and humiliated, The Cat King decides to retire.

Throughout her adventure, The Baron always told Haru to believe in herself and stay true to herself. And the next day it seems, her entire being has changed. She's a lot more organised, mature, self assured and isn't bothered by trivial things anymore. It's actually really nice to see and I found it really inspiring.

Overall, I loved it. 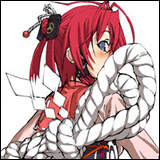 Before you go any further, if you're considering watching The Cat Returns, watch Whispers of the Heart first. While it doesn't have a huge imact on the story, it is technically the precule to The Cat Returns(plus it's an awesome movie ;]) Now that that's said, let's move on, shall we? The Cat Returns is yet another wonderful movie brought to us by Studio Ghibi. Knowing their behind this, how could you not want to watch it? Anywho, that art is (of course)wonderful, the story is cute and quite interesting, the characters are great, and the story is heart-warming. A great movie to brainwash into loving anime watch with your kids(or any other form of small children). :] ~Tea