The Case of Hana & Alice - Reviews 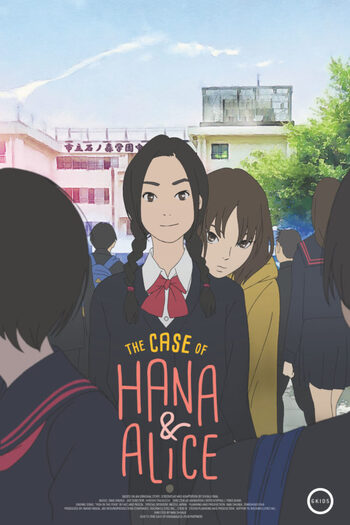 Hana to Alice was an extremely wonderful movie, one that I wasn't expecting would get to me as much as it did.

Rotoscoped anime is usually not seen as a good artstyle and thus ignored, though after watching this anime I have completely dropped those 'standards'.

Hana to Alice is the story of a girl who moves to a new area, one with odd beliefs that leaves her paranoid to even stay in her room, so she takes it onto herself to discover the truth behind it.

I could get far into the plot, however i'd rather get into the characters seeing as they were my favourite part. This anime highlights friendship, the fact that two can bond from being at different distances. (Something that your name failed with) Though it seems like the entire series the two are beside eachother, in reality, the two are far apart trying to accomplish something together to solve the mystery. The friendship they develop is beautiful, as well as watching them boost eachother up, seeing them both bring out the best in themselves.

Hana to Alice is the story of a girl by the name of Tetsuko Arisugawa who has moved to a new city with her mother as a result of her parents’ divorce. From the beginning we learn that Testuko is closely watched by a neighbor whose identity is not quite clear. In attending her new school we learn that there is some mystery surrounding a former student as the class believes that a murder took place in the school and that his spirit is somehow still lingering in the “real” world. Testuko ends up investigating the mystery with the help of the mysterious neighbor of hers.

The story plot was intriguing because it was not clear right from the bat what direction the main idea would take. The movie had a nice premise that was engaging and left the audience wondering what would be next. The pace was very good but there were a lot of scenes/events that did not really served a purpose. In addition, the ending was not as good as I would have liked. Nonetheless, the ending did tied all the loose ends.

The animation was good. The movie came out in 2015 and we see good quality in the graphics but the overall drawing was not as good as others seen in the last 5 years or so where vivid colors are used. The character design was a bit bland but somehow this made the story a bit more “realistic” (I mean, you don’t see people with pink eyes and purple hair in real life).

The soundtrack was okay, not great. I actually laughed big time while listening to the lyrics for the ending song in English.

I grew to like Testsuko. She had a very friendly personality and was a bit more mature that her peers. She seemed very independent and witty in her own way. The other main character is Hana. She struggles with the guilt she feels due to a rumor that came about after she did something mean to someone she cared about. Due to this guilt, she becomes isolated from others at her own free will. It’s hard to describe her without ruining the plot but she was great character to the story.

I enjoyed watching this movie to kill time. People who enjoy some mystery and high school life may like it. The movie is not difficult to follow as the plot is rather simplistic. I think the characters are gold but the animation and sound are not to pair.

It's a very simple story, but finishes strong. The characters are all really dramatic, and not casual, simple characters; they're all easily unlikable, but the narrative of the story kind of keeps you from really disliking any of the characters. The comedy in this is kind of painful. It feels like the creators don't really know what their strong suit is, which is building the relationship between the two leads, and tries to put in some weird cheesy slapstick-ey comedy that doesn't really work. I watched the first 15 minutes, dropped it, and then came back and watched it all because the opening scenes did not leave a good impression.

Obviously, the animation is not that popular. It's 3D animation. Take that as you will.

I won't be adding this to my rewatch list, nor will I really recommend it to anyone unless you like an ending that feels complete. This movie doesn't end in a wishy-washy way, but has a nice, firm ending.

No spoilers- This movie was okay, enjoyable enough to watch but far from anything special. The movie follows Hana and Arisugawa (Alice) as they investigate a murder that had supposidly occured at their school, and growing closer as friends in the process. But unfortunately, it was the simplistic plot that rendered this movie just barely enjoyable. I didn't mind the rotoscope animation but for some people that may further diminish the quality of the film. If you played this in the background while you did something else you would probably enjoy it as much as I did, minimally.