The Boy and the Beast - Reviews 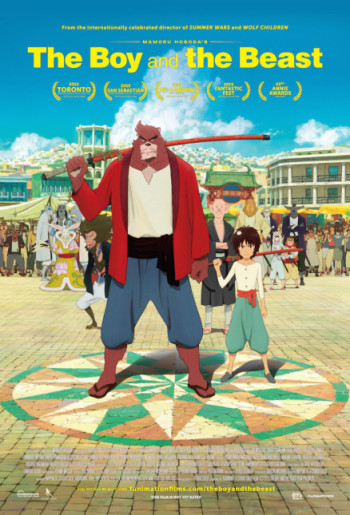 Let me just say there's no doubt that after watching this movie I 100% know that this movie has become my favorite animated movie of all time. Everything about this movie is perfect and I mean everything. I love this movie so much because the plot is so meaningful & I can actually relate on a spiritual level to both of the main characters. the meaning of this story is just amazing like I truly understand this movie very well just because I can honestly relate to kyutta. Most importantly the characters are what make this such an amazing movie, Kyuta and kumatetsu made me smile, cry, and laugh throughout the whole entire movie. This movie in my opinion also has one of the best character developments for any animated movie,both of the main characters change drastically & I love it because you can honestly see that they develop in a good way based off of eachother. Everyone needs to watch this, also the animation is very very beautiful and I just know that's one of the many reasing why people won't forget about this movie. Overall this movie beats any other animated movie out there I highly recommend to anyone and I know you'll cry of happiness. I wish I could watch this movie for the first time over and over again (I'll still watch it repeatedly and most definately but it on dvd). I wish Kamatetsu was a sword in my heart.

This movie truley blew away my expectations. After a Youtuber (Cellspex) recomended it I wasn't super thrilled to watch it. I had nothing better to do and the movie sounded like it would be about a 6/10. When I started watching I was brought exactly what I had expected. The beggining is slow but it only lasts for about ten minutes. After that I got a truley good movie that had me hooked for the entire time. This movie seemed to be for a male audience, but I showed this movie to my mom and she loved it. The characters are lovable and I'm sure you'll be routing for them the whole movie. The interations between Kyuta and Kumatetsu are extremely well done.

This movie didn't have my favorite story ever but the characters certainly made up for that. Not only does this movie have amazing characters but also beautiful animation. This is second best looking film I've ever seen. Its only beat by the Tail of Primcess Kaguya's fantastic hand drawn art.

The Boy and the Beast is a quite interesting movie. Honestly, I'm not really a fan of Hosoda, but this one was way better than the Wolf Children.

The story's about a young boy named Ren who meets a beast when he was lost. The beast takes the little boy as his disciple. The beginning is very classic, with an important "Miyazaki-touch". But if the plot is great in the first half of the movie, the second part is very incoherent, with big errors in the story telling. Of course, the romance was very dispensable, and the end reminds me a bad horror movie. After a refreshing beginning, it's a shame!

However, the couple of main characters is really good. There is some good alchemy between the boy and the beast. But so much vulgarity! I don't think this was so important, and if it can be funny during a few minutes, it's finally annoying.

I have to deal with some graphical stuff. But it was a deception. I can't bear that flat style, with no personality. And the constant use of CG is a pity. The end is just horrible to watch. All this CG is just not acceptable with that poor render. Fortunately, the character design was really efficient.

But I enjoyed especially the music. Its use was just perfect, and a few scenes were really epic with that music. The sound design however was a little cheap, with disproportionate sounds.

Finally, I think The Boy and the Beast is not a bad movie, but the director is not subtle at all. I hate when the characters say to the spectator how he have to watch the movie. A good movie doesn't need any manual, and have to keep a part of mystery. And here, the movie is so obvious that we don't need these dialogs. It's really a shame, and I was really annoying. I had the feeling that the director spoke to some children, and was forgetting all the other fans of animation.

So, that's a 7.2 for me, but I think I'm too generous. This movie wasn't that bad, but to much imperfections to be considered as a masterpiece.

This movie was surprisingly philosophical and psychological under the hood, so to speak. The way I see it, it gives some perspective into how to deal with mental and emotional growing pains and how to take control of yourself. Most of the story can be interpreted in a metaphorical way, and the movie isn't obnoxiously difficult to read in that sense. More important than decoding some hidden meaning is the feeling and outlook that the story gives: it should already be quite helpful and basically conveys the same things. In any case, the song playing during the credits will spell it out for you.

The technical and artistic execution is very good. It's an entertaining story, although the end part can be a bit dull if you're not into its philosophical aspect.

I'd recommend The Boy and the Beast as near-mandatory watching for teens and preteens, and I wish this movie was around when I was that age. Truly an excellent film!

A title I've wanted to see for a long time, but didn't really have the time to do so. I haven't really watched anime in a long time, so I kind of grew out of it and it gave me a bit of a different perspective.

So, to start my expectations of this animated movie were pretty high. I wanted to see a sweet movie about two characters from different backgrounds  that get to change each other and develop a strong bond and I kind of got that.

The beginning is nice, we get a brief introduction of our main characters background and circumstances. He gets introduced to a new world where he has to adapt, he learns and forms a close bond with his parent, it's good.

However, midway through the movie, all changes. Action shifts to the other pole,  two new characters get added and they affect the world in what seems like a rushed way to me, the main character has a sudden change of heart , then the main conflict, that seemed to have been forgotten since the start of the movie is brought back up but then it goes away as quick as it came, only to be replaced by another and end up in a rather confusing mix of sadness and joy?

It's like the director didn't know where he wanted to go with the story, the beginning is slow and at some point everything speeds up, all character development halts after this jump in time, there is no real progression anymore, the movie loses it's structure, it feels like 2 movies badly edited into one, cutting essential parts out of it.

My personal opinion is that there should have been a lot more character development, at the same pace the movie started out. I would've loved to see more about kumatetsu's past, a better representation of the world he belongs to and it's customs/inhabitants way of living, relationships between those, especially his rival and the grandmaster, maybe add another point of interest to him, beside Ren.

The artwork is pretty, characters are nice and brightly colored. But there seems to be a distinct lack of backgrounds. Be it due to a low budget or not, the action happens in the same couple of places at all times. We get to see very little of this fantasy world, and that is a shame, because that is the entire beauty of the genre, exploring vast places filled with interesting creatures and magic. There is so much lost potential here.

The soundtrack is okay, nothing special, but not too bad either. It's there and it does it's job.

Voice acting is pretty decent as well for the first half of the movie, not so much for the new characters added after that.

Animation. Fights are decently animated, there's a lot of moving and swinging and jumping and it all looks good, but that is being limited to rather few scenes.

This is hardly a proper review, more like a personal opinion, under no means do I try to deter people from watching Bakemono no Ko, I am only sharing my expectations and the way I feel about it after having watched it.

-A good start, lovely characters with good development for the first half.

-Extremely rushed second half, action shifts too much, conflicts changes too often, storyline becomes an amalgam.

-Wasted potential on world exposure and characteristics of a fantasy world which should be it's strong point.

-Good animation for the few scenes it's being used in.