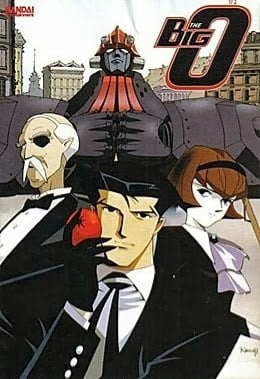 Note this review encompasses the entirety of Big O. So this is my first review of an anime that I rewatched. I watched Big O when I was a kid and naturally felt the need to eventually rewatch it. And overall I'm glad I did. I'll be honest I absolutely hate the intro, it gave me a headache every time I heard it so I stopped after about the 3rd episode. Everything about the back-story is very vague and doesn't quite get cleared up as the series goes along. And while I fully understand that this was intentional, it wasn't a dynamic I particularly enjoyed. But the story that does play out through the course of the series is in fact quite engaging. There are two moments in particular that stand out: the midpoint, and the ending. Both were truly dynamic and will not to be spoiled in this review. Needless to say that these are the reasons you watched the series. As far as the characters are concerned (which is a biggie for me) I didn't find myself particularly attached to Roger Smith (the lead) although I did find his name to be clever. However, Dorothy (his android partner) was quite compelling and was really the first non-humanoid character I grew to love in an anime. So overall, there are a lot of flaws in this anime; however, with a clever story and one timelessly compelling character Big O is definitely a good first step for appreciating similar anime which are probably better, still 6.5 out of 10 even with nostalgia.

This anime is good mostly for its aesthetics rather than its application on screen. It is a tribute to various things and there more of the following list you like, the higher the chances become for you to love the show. And those things are:

1) Tribute to 60’s mecha. All machines are drawn weird, reflecting the simple and bulky feeling of the first generation of super robots. That makes the show to stand out from the average Gundam rip offs of modern anime and gives an artistic value to the action.

2) Tribute to Queen music. The opening song is exactly that.

3) Tribute to film noir. The entire city is dark and gloomy, and the stories are around detectives and mysteries. That is uncommon in anime and again makes it feel special.

4) Tribute to Batman. Well, the main hero is a rich man fighting crime with hi-tech gizmos, lives isolated in a mansion, has a battler and a super computer, and makes deals with the police and the mayor. A major villain is also acting pretty much like Joker as well.

On the other hand, this is not a show for everyone. Not many are fond of such retro mecha looks, or film noir. I don’t know any who dislike Queen or Batman but I guess there are some of those as well. Taking out those who are annoyed with just one of the above, the audience of this series is shortened to a small group. Furthermore, there are two flaws of sorts in this show that further lower the chances of you liking it.

1) The story. It starts very mysteriously and cryptic, in a city where people one day just forgot all their memories and now try to rebuild their lives from scratch. Most episodes are in fact about the human psyche and deal with memories, ideals, ambitions and the dark side of greed and ambition. Unfortunately, there isn’t much to see other than a basic premise. The first half is practically stand alone mission, while the second has a loose and messy plot that ends in a very rushed and almost tasteless way. If you expect to see an amazing revelation or a great chain of events, you will be greatly disappointed.

2) The action. Seriously, the mecha action is hardly exciting. The lead robot pretty much owns every adversary fast and it exists as nothing but Deus Ex Machina. The hero summons it when things get rough and it pretty much becomes cheap panacea instead of using wits and cunning to escape or win a battle.

A hit or miss element is the cast. All of them are very simple in personality, almost stereotypical. They reveal sides to themselves as the episodes go by but don’t really develop. The interaction between the main duo, super rich and smart Roger, and his android cooldere assistant Dorothy, is very interesting but it may become tiresome along the way because of the simplistic plot. If pacing and simple personalities is not a problem for you then you will love them.

As I said, it is mostly aesthetics that matter in this show and not the actual plot or story. It has an unorthodox presentation but it is nothing other shows like Ergo Proxy or Ghost in the Shell didn’t do in a far more refined and mature way. It is still a different watch from the usual but hardly a great one.

What I Liked: The lovely homages and tributes to various film and television genres, character designs were great, Dorothy was a standout character, nice mixture of intrigue and action, the sudden ending.

What I Didn't: The dated feel of both the animation and the soundtrack, the fact that the soundtrack became repetitive after only a few episodes, the sudden ending.

Final Verdict: There's a lot of fun to be had with this Science fiction-cum-Film noir anime, with its various throwbacks to all manner of film genres and even certain rock bands of the 80's. Can't wait to see an actual ending, though.

This anime could have been so much better.

The first seasons story is episodic, with the only thing tying everything together being a single; the question being: Why did everyone lose there memory 40 years ago. It became the only thing I cared about in the show, but the main character made it his first rule to put the past in the past. Instead we get stand alone episodes of the main character being told to handle a negotiation only to end up battling some scientific monstrosity. It became formulaic and dull very quickly. The questions surrounding the city the story takes place in start to be revealed in the end, but for me that was too little too late. I read the synopsis and found out the second season is not episodic and actually does some world building, as well as giving the story a pretty decent (though open to interpretation) ending. Looking through all the fan theories has been a lot more enjoyable for me than actually watching the show. I should have just skipped the first season to begin with, but I didn't know and so now am left not wanting to watch the second.

The only character I liked was dorothy. Angel was looking for memories, which is what I would have been doing, but we don't see much of her or figure out what she is all about until the second season. Richard Smith (aka blissfully ignorant batman) suffers from boring main character syndrome. He's to punch robots, but if he questioned anything the plot would have to advance and we couln't have that or we wouldn't be able to fill 13 episodes.

The animation was janky. Some of the designs were pretty cool but things moved pretty oddly at times. It's an old show so I can't say I expected much.