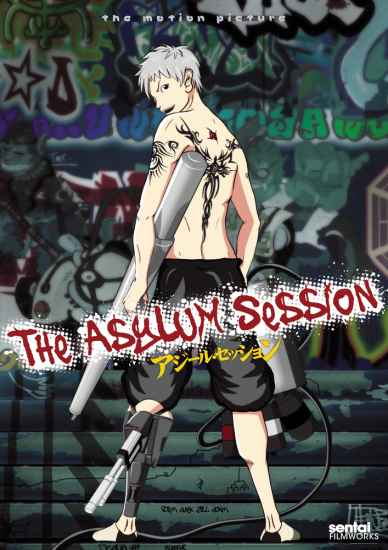 Story: I have no clue. Usually I have a clue but this shit was messed up. I may have watched it raw but even with subs, chances are it would have been a wet brain fart. From what I understood from the butt-ugly pictures, it was about a girl who meets this badass guy with a gun for the leg and an attitude that attracts women because all girls love bad boys. Except I don't know if she loves him. Not that it matters because it's about art and not breakdancing while scoring head exploding headshots with his gun leg and rifle. Stupid, ain't it?

And it is, but it sends a message, one wrought with symbolism and all that shit. You just know something this art-house is all about style and symbolism and it is, in particular the style of suck. How we get to the climatic battle against The Man makes no sense and I know this is despite having no crappy ass subs. I have a sixth sense for this shit and it was telling me to stab my brain with my spleen.

Against all reasoning and decency it made fights boring. Fights should be balls out slugfests with hits that make you wince, bone-shattering finishers that make you cheer to the heavens and should keep you on the edge of your seat to see who falls in a bloody pile of broken bones and barely audiable breathing. But it's like a sissy boy slap party mixed with a practice kendo match between two year olds. Not even gunboy can save it.

I can't even grade something this shitty. I was bored out of my skull and contemplated a self-lobotomy but I had no drill, no nails, no rusty spoon.

Animation: It looked worse than a sweaty ass after laxative beans and spicy chili night. It was CGI, the kind that makes your ass vomit blood and your stomach try to escape through your digestive tract. And the animation, how it moved and flowed, was sludge. From the sewers. It looked like shit- sorry. It looked terrible and some of the facial features in movement were outright creepy. Even a little kid made me cringe back in mortal terror. And don't get me started on the fights again. They looked TERRIBLE. Hand movements, a lack of proper physics and it just... lookes wrong. So terribly wrong.

The scribbles they do are kinda neat, but ugly neat, you know? You know. The sketchbook was subject to the ugly nail bat with all the abstract art and avant-gargle they have lying around. And a random pixelated dick that had no fucking reason to be there but to be edgy and for the sake of dicks.

Sound: Bagpipes. That deserves a 10 and all the... random music, but... I can't remember. Mind was so bored that it couldn't comprehend the sounds that assaulted it. I can't call it bad but it's below average. Nothing memorable, nothing entirely decent and the voices, I guess they're alright, mostly alright. But bagpipes.

Characters: There is this guy named Akira, the gun-leg guy. He's all arrogant, selfish, douchy and a prick at times, but he warms up to the main girl with the sketchbook, Sketchbook Girl. His gun leg should be firing .50 rounds that explode into flaming shrapnel but it doesn't because- because what? Because he is fucking stupid. If you have a gun leg, you use it to waste suckas in the most stylish, badass way possible. He had so much potential to be a total badass but it was squandered.

Sketchbook Girl, I had no subs so I had no clue on this front. I don't know what she was about, what she wanted to do, why she joined up except to fight the power and man, I really don't know. Ditto with every other damn character in the thing. Except for Eye-Patch Girl. She was cool but didn't do much. Not that anybody really did much except for Rebel Guy but... I guess some people did unimportant stuff.

Overall: I still have no fucking clue what just happened. It goes from school art class to the ghetto and free soup to meeting up with some Art Rebels who want to stick it to the man to a gathering with King Hobo and all these other dudes, Rebel Guy being chosen to lead the pack in a final confrontation with The Man and the Popo, some stripping and pixelated dicks to...

I don't even know if half of that shit is right and everything from the pixelated dick to the final controntation was a blur. It made no sense, had low production values, was boring and with no subs nonsensical and a total brain drain, sucked ass and was wasted potential with an ending that comes out of nowhere. Had a good concept of gun-leg guy but wasted it by not having him waste people and terrible fight scenes to boot. This is so bad it's shit and it ranks up there as one of the worst damn things I've ever fucking seen.

The Asylum Session is a movie done by Comix Wave which tells the story of Hiyoko. A girl who ran away from home because her father forbade her from becoming an artist (awesome parenting by the way!) and ended up in an abandoned stadium where she met a bunch of artists with different motivations.

Concept-wise is interesting since it's not a theme that's usually tackled, but the execution was disastrous. The movie ends up being an insipid dreck that will put even the most enthusiastic viewer asleep. On top of it even the action scenes towards the end are dull!

Like the plot, the characters are pretty boring. The characters themselves are flat and uninspiring, and that doesn't change during the whole movie despite the attempts of developing them.

I said the plot was bad, but what was truly atrocious was the animation. The movie looks as if it was done in a rush and didn't put much care in the designs. The characters are off-model if not straight-out ugly and their movements look completely unnatural. I mean, look at this: 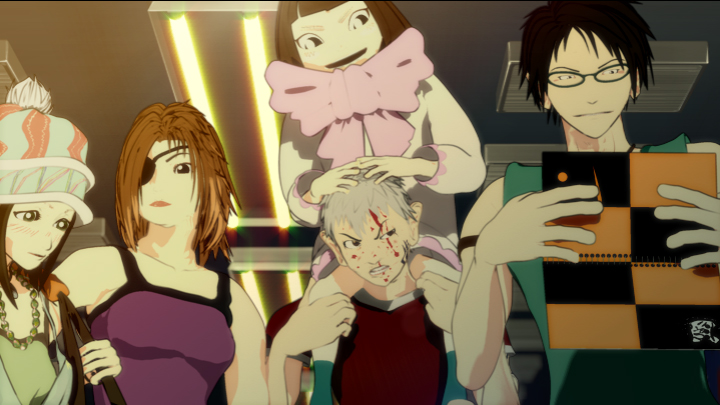 One could blame this to the use of cel shading, but shows like Bubuki Buranki are a clear proof that you can get a good-looking show done with this animation technique. The graffitis and drawings in the sketchbook are well-done though.

Sound-wise the movie was fine. The voice acting was well-done and the music was decent. Something that sounds like an achievemnt compared witht he rest of the elements in this show.

All in all what could have been a decent movie turned out to be one of the most mind-numbingly boring anime that was ever done.