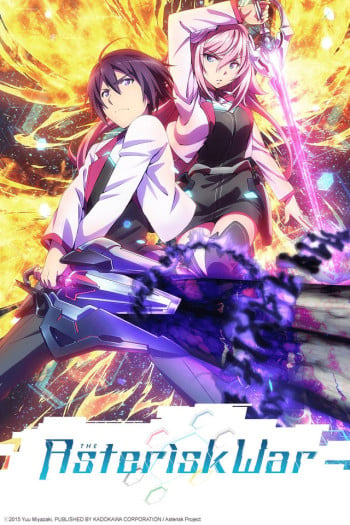 The Asterisk War Episode 8 - A Holiday for Two, Part 2

Saya and Kirin have teamed up for the upcoming Phoenix Festa. By the look of things, they need to spend some more time together. The girls skip practice to socialize more. Surprisingly, there is something Kirin would like Saya to do for her...

Anime-Planet users recommend these anime for fans of The Asterisk War. All available to watch right here, right now!

Op mains that start off unknown and or underestimated?

male characters with a knack for ending up in unbeliveable sexual positions just for the heck of it?

vague early hints of the surprise plot yet to unfold?

Well you get all that and more from both of these series!

Note: reccomendation is based on ep one of both series.

THEY ARE LITERALLY THE SAME ANIME. SERIOUSLY I DIDN'T KNOW 2 ANIMES IN THE SAME SEASON CAN HAVE THE SAME OPENING SCENE, GENRE, AND FIGHTING STYLE.

They are genuinely indentical... *Spoilers*

At an academy where teenagers use their magical abilities to duel each other in massive arenas for rewards. An amazingly talented but horribly underestimated swordsman accidently barged into a room with a pink haired, tsundere, princess from foreign nation changing out of her clothes. The princess gets really pissed off and challenges the swordsman to a duel. Despite the princess having amazing skills using fire, she underestimates her opponent and loses the duel. To add insult to injury, she falls in love with him in the process.

^The summary of the first episode for both Rakudai Kishi No Cavalry and Gakusen Toshi Asterisk. THEY ARE THE SAME.

Though that isn't a bad thing as both of them are some of the best and most enjoyable anime to watch this season. Check'em out, you won't regret it.

Both titles have similiar story lines are very enjoyable. If you finished one of these titles and want something just like it here you go !!!! Fans of this genre shoudl definetly check this out.

There was a word limit so there's some random musing below feel free to ignore.

Asterisk War and Magic High School are alot alike but they do take you on different paths. Magic School felt alot more serious to me and didnt containt some the slice of life elements that ASterisk had. The main charcters are also different where Asterisk's is a your regular shy but enthusiastic guy , Magic Highschool is more stoic but seems to make all the girls fall in love with him..

Set in a world where witches run havoc, the military decides to shift from using sword to utilizing guns to neutralize magical threats. The Anti-Magic Academy is an institution that specializes in training witch hunters. Takeru Kusanagi, who can’t use guns and continues to fight with a sword, is relegated to the 35th Test Platoon, a motley group...

The main protagonist are pretty similar. They both use swords, and they both get powered up swords. They both take place in school although the school doesn't seem to take any interest in student welfare. I'm actually watching both shows at the same time, and I get them confused on occasion.