The Aquatope on White Sand - Reviews 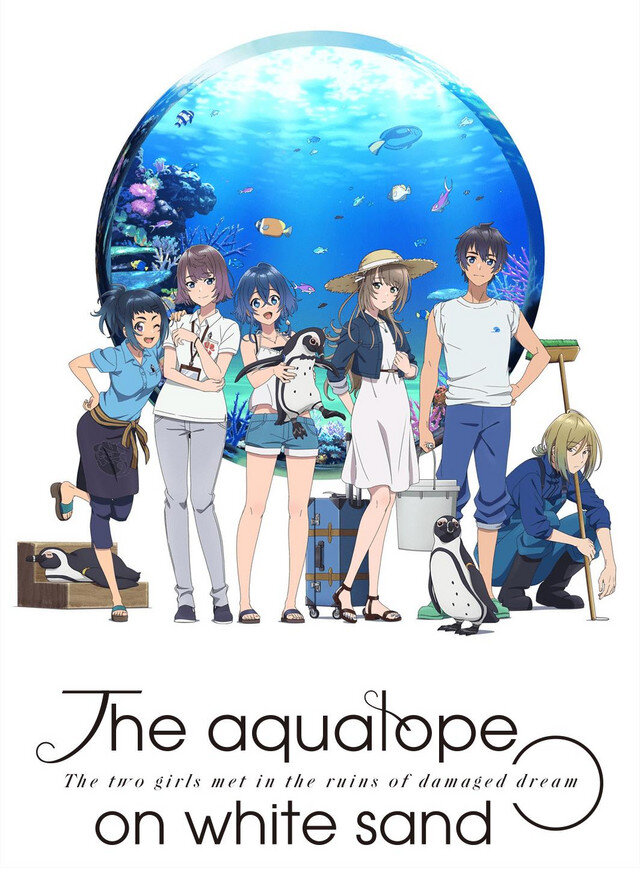 This was a really strange show that started out with a lot of potential, and it seemed to be a complete package, but after a few episodes it just started to fall apart. The animations are alright, visuals are gorgeous, and the set-up is there for an emotional story which is what you expect from P.A.WORKS, but unlike most of their other recent works, a great portion of its drama is just not that entertaining to watch, and it's also just really dragged out.

The show starts with an idol, who fell out of the spotlight, trying to reinvent herself, which was pretty neat. The show then moves its focus towards an old aquarium that's financially struggling, which was also rather interesting. But then the show moves into a direction where this neat group of characters, who worked at the old aquarium, have to be relocated to a new aquarium that's located in the same village, which is where the show starts to fall apart. The charismatic side characters that supported the main cast end up being used less, while the main characters themselves end up looking more miserable.

One of the main issues in that problem is seeing one of the most hard-working and cheerful characters, who has to accept a role in marketing. To everybody watching it's clear that it's not what her strengths are, not to mention that her supervisor isn't helping her to grow into that role either, it all just becomes a drag. Pure misery, and none of it was really necessary. It's just a rather unpleasant watch, nor does it really help with the growth of the character.

The show starts off strong, hitting all the right notes, but it just ends rather soulless.

This anime is an underrated gem. The premise is so creative and original, and while at first I had no idea how they were going to make 24 episodes out of it (especially when things seemed to wrap up pretty nicely around episode 12), they successfully kept the story going in directions I didn't expect. From the beautiful animation, to the interesting and likable characters, to the unique storyline, there's nothing not to love about this show! I'm shocked to see it receive such mediocre ratings; I was thoroughly impressed from start to finish. The Aquatope on White Sand is truly one of a kind.

P A Works’ 2021 over-hyped disappointment about fish is proof that you need more than teenage anime girls to make something interesting. Not that it doesn’t have its moments, but they all happen in the first 12 episodes as this monstrosity is overly long by about 100%. You get the feel that this is two season’s worth with season 2 being the one to disappoint the fans. The first half unites main character Kukuru Misakino with teenage runaway Fūka Miyazawa in a desperate bid to save a failing aquarium in Okinawa. As such it was quite average. Spoiler alert: they fail. But the battle is an engaging one if not terribly profound. There is some sentimental mumbo-jumbo about visitors having strange hallucinations whilst staring into the fish tanks but that is about it. You get a couple of moving moments but this is pretty much take-it-or-leave-it stuff. Hardly compelling viewing.

Then all -change half way through when the girls all go and get jobs they hate at a different aquarium. More fish. More penguins. Everyone goes “oooo”! With the second half you might think the story would kick into gear. It doesn’t. It just meanders around with little or no direction. No conclusion. No real story. Is this a coming-of-age narrative? Not sure. Is this about saving our oceans from the ravages of climate change? We wish. That gets shoved in the last few episodes as an afterthought. Just what is this all about? Pass. Turtles maybe? We were just left fuming that the word “aquatope” is a Google-whack (look it up, the word doesn’t exist). Then what is the deal with the sub-title “The Two Girls Met in the Ruins of Damaged Dream”. We guess we have to resign ourselves that Japanese studios squirt a few English words into the title to make it look cool to the domestic audience. What? There are a million native-English speakers out there amongst anime-fans who could grammar check the gibberish for free. We just don’t know where to go with this. It is just meant to annoy you. The fact that we spent more time getting pissed off with the poor grammar than thinking about the story is an indication as to how much this sucked. Go back and try again P A Works. You’re drunk.

We all have regrets and failures in life. Someone who understands the loss of a dream would relate to, understand, and be soothed by this beautiful anime.

If you're stressed out and tired of life, this anime is for you to unwind. I was at first captivated by the art style and colours of the cover itself.

'Do What's Right, and Everything Will Work Out'

It is relaxing and soothing with magical art. It is slow yet perfectly paced. Watch this intricate coming-of-age tale.

here's a lighting strike review (because I didn't finish the last 2 episodes) animation is great and the sound is too the characters are sort of fun for the side characters but the mains are very very melodramatic. The story is also boring and for a slice of life I know they aren't supposed to be explosive but for a hyper dramatic show with a quite MC and a uninteresting story for the aquarium it gets very boring very fast. And for most people who don't have a lot of time that just isn't worth it for those who enjoy dramas give it a shot you'll probably like it. Otherwise there are better lively  SOLs.

thasts all folks thanks for the read and have a good one!