The Anthem of the Heart - Recommendations 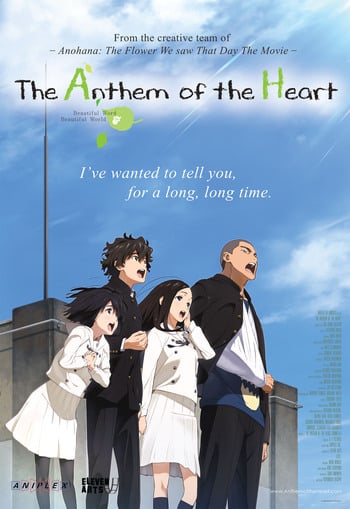 If you're looking for manga similar to The Anthem of the Heart, you might like these titles.

"Abdominal Perforation Syndrome" - when children enter puberty, a hole forms in their belly. It closes automatically as you grow up, and having gone through this experience is a sign of adulthood. This story centers around junior high school student Asahina Chimaki and those around her, as they are torn between childhood and adulthood.

High school can be a stressful time for many young people. The change means a new commute, new friends, new courses, new teachers. For Shino Oshima the change could have meant an opportunity to blossom into adulthood. Unfortunately, things go wrong on her first day - she fails to even say her name during her homeroom introduction. From then on Shino is a part-mute part-stuttering mess. Ostracized and afraid she struggles to find her place in this new world... But thankfully for her, she finds her voice through music and some unexpected new frienemies.

A story set at a girls' boarding school. It focuses on friendship between girls, with a bit of supernatural flavouring on the side.

When Asumi was just a baby, Japan's first manned space rocket, the Lion, malfunctioned and crashed into her hometown of Yuigahama. The impact killed many of the townspeople and critically wounded the girl's mother, who lay in a coma for several years before passing away, having never regained consciousness. With the help and friendship of Lion-san, a mask-wearing ghost who claims to have come from the rocket, Asumi grew up focusing on her dream – to someday travel to space. Now a young adult, she is determined to beat the odds and attend the newly-formed Tokyo National Space School to achieve her lifelong goal. Alongside Lion-san's guidance and several new, dear friends, Asumi will try her hardest to touch the stars.

Ranze Etou is an adorable immortal girl with a vampire father and a werewolf mother who would throw things at each other when they get into childish fights. However, Ranze just wants to live like a normal girl and lead a normal life. Unfortunately, she is "blessed" with the power to turn into anything she bites. For example, if she accidentally bites a cake the wrong way, then she will turn into a cake. The only way to return to normal is to sneeze! Ranze is in love with Shun Makabe, who is a handsome human boy at school. However, a human girl (without much hair) named Youko also likes Shun, and she would do anything to reveal that Ranze is not a human!! Things got even more complicated when Ranze met Aaron, who is the prince of the Spirit World. Aaron fell in love with Ranze and first sight, and he would do whatever it takes to win her away from Shun...

There are many firsts when you are a child. The first time your heart pounds fast when you see your childhood friend, when it didn't do so before. The first changes in your body. Friendships and relationships that all too sudden become more complicated. The times when you don't want to talk to anyone, but it feels too hard to bear alone. This is the story of elementary school children.

Raised in the small town of Kinoto, Shiho is a third year in Middle School. She loves playing piano and dreams of opening a piano school in town in the future. An attractive student from Tokyo, Nanami, transfers into Shiho's class. Through meeting Nanami, Shiho's world starts to change.