The Ancient Magus' Bride: Those Awaiting a Star - Reviews 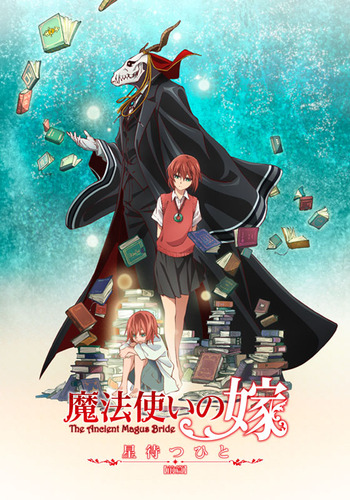 I need to explain that I've yet to read the manga. Though this episode has sold the series to me better than anything else I've seen.

This OVA prequel to The Ancient Magus' Bride is nearly a perfect mixture of everything I love. The first scenes of a magical shop set in what looks like Victorian London alone covered nearly half of them. Magic that blends seamlessly into the characters' lives and doesn't really need explanation, an older or probably historical setting, and an enigmatic character that might not scare you but doesn't quite make sense either are a just a few of them.

The animation is gorgeous. This is some of the most detailed, well drawn, and colorful animation I've seen in quite some time. While the story in this episode is short, it is very well contained and does not leave you with questions or lost if you don't know the source material.

The voices and music are equally as good; the voice for Ellias is particularly good and helps to bring him to life since his mouth doesn't move.

While we see Chise Hatori, a fifteen year old girl who's become an apprentice to the Thorn Sorcerer, in her new situation, the focus of this episode is the life she lead before she came there.

All in all, a great OVA and one that will leave you wishing for a full season anime. Off to find the books!

I will start by saying that this is a prequel to the manga the ancient magus bride which any is welcome to read!!!

So I first the OVA information on this series and thought that the art and story line where out of this world. As the series isn't finished yet and the first OVA episode was released on the internet today I can't say for sure what the actual story line is. Obviously it's about a magically special girl and the humanoid creature that takes her in and their future relationship because the title literally is The Ancient Magus Bride. The relationship between the girl Chise and the skull headed Ellias is strangely pleasing to read/watch and I personally can't wait for the rest of the series to progress.

The Ancient Magus' Bride is a Japanese fantasy shounen manga series written and illustrated by Kore Yamazaki. (Frau Faust, Futari no Renai Shoka). The series is published in Japan by Mag Garden in its Monthly Comic Garden magazine. The manga is also licensed in North America by Seven Seas Entertainment. Wit Studio produced a three-part prequel OVA of the manga, and an anime television series is currently airing.

Mahoutsukai no Yome: Hoshi Matsu Hito follows Chise Hatori, a 15 years old girl. Being absolutely alone and having no place to go, the girl is bought for money by a non-human mage named Elias. Having seen the unpleasant part of life, the girl finds herself in a new family. To her big surprise, she is now Elias’ apprentice, as well as his future wife. Chise enjoys her new peaceful life, when she suddenly receives a book from her past, which introduces us to her tragic backstory. This piece is a prequel to Chise’s encounter with the Thorn Sorcerer.

Having read plot’s summary it might be too difficult for one to understand the anime’s main idea and it is close to impossible to do so, because Mahoutsukai no Yome: Hoshi Matsu Hito is a backstory and shows only Chise’s childhood. You will be shown her tragic childhood and you will not get an idea of what is going to happen in the anime’s TV series, which is currently airing. Anyways, enough with that long introduction. This OAV did a good job explaining most of the needed for Chise’s story things; yet, there is still a great deal of questions that should be answered. But let us give the TV series an opportunity to answer these questions.

The real magic of this anime, of course, is its visuals and soundtrack. Do not get me wrong, it is not the only gem of this anime. Anyways, the anime’s visuals amazingly help the viewer find themselves in a very beautiful, but also in very dramatic fairytale. I would describe Mahoutsukai no Yome: Hoshi Matsu Hito as an anime somewhat similar to Ghibli pieces, but more realistic and perhaps even more dramatic. Sound wise, the anime also does its job introducing the viewer to this piece. Not only the OST, but also characters did simply an amazing job.

Character wise, the OAV focuses on Chise’s backstory. She is the main character and the titular character of the story. Her existence can be described as an unwanted child that should just have stopped its existence. Yet, Chise is not just a child, because she is able to see what other humans cannot; this supernatural power does not give her happiness only grief and harm.

That said, taking into consideration the fact that this OAV only introduces us to the story of the main series, I have to say that it does its job pretty well. Please do not think that this anime is a pure romance, harem, or anything else. (It has nothing to do with harem, though). Indeed, the anime’s synopsis screams that there should be romance, but everything is not that easy. The Ancient Magus' Bride OAV is an excellent prequel to the TV anime’s series that will introduce you to a heartbreaking story of a future sorcerer Chise.

Overall, I give this prequel a very weak 10/10. As a prequel, it is simply near-flawless. It has been awhile since I last saw such beautiful and tragic fairytale, with a grain of realism, too. I highly recommend this masterpiece for all anime fans. It might be; however, boring, but, please, do be patient and you will be rewarded.

Review for The Ancient Magus’ Bride: Those Awaiting A Star: Episode 1

atmosphere on a rainy night. These scenes were pretty even on own their setting a great

overall tone so that even thought it was dark, it was held just enough light to them for warmth

in the first setting.

The next scene bringing us into a woman’s study was beautifully done. It was masterful story

telling in establishing the prescence of magic with her books, her tools like stones, a bird that is

mechanical that becomes alive was especially unique. The main thing that got me excited was

some of the newer concepts that are around but typically aren’t used. The faeries got me

excited and all the little creatures that live in places. Especially the style of these faeries, these

magic. Angelica for example seems to use water magic shown in how she wraps up materials

for Chise as we learn later. Hugo also seems to be some type of water faery and the creatures

up in Angelica’s study also have that theme. I’m excited by the unique creatures popping up in

Now on to when Chise gets these materials for magic, we see her waking up in this country side

house. The talking dog I immedietly assume must be Ruth’s familiar, as that seems to have

some pattern in this. I also didn’t expect to see the dog into a human so it was fascinating. The

breakfast scene is enticing, setting the mood of the characters relaxed daily life. What makes

skeleton thing of some sort. Yet the scene is so normal that we get that despite how he may

look, he’s very human like. Chise seems to know him well being able to read that he’s bothered

by something. It’s not until the study room that I get brought into the world of faeries and

magic again by going into the study. It seems to be a pattern that faeries and these cool

magical creatures seem to thrive in library settings. In warm lighting among large books. And

that, to me, is amazing! Creative Writing Major here so this is awesome to me. Among

literature is where I live too. Then there’s the introduction of the book and Elias, Chise’s

teacher, seems determined understand it’s meaning. So it goes into a flashback. If you’re me,

sympathy other than ‘well that sucks’ and feel like just skipping past it. However this was a

want to take in kid, random guy shows up and ‘“hey you got magic, I’ll take you in.” But it’s not

how it goes, all we see first is her and her mothers says “I never should’ve had you” and okay I

think. But then the adults start talking, I’ll admit a bit of a cliche moment but real in the sense

that people don’t want to randomly take in a child. They say she’s odd so I get the sense that

like it that led to her death possibly by suicide. There could also be a possibility that Chise’s

Mother saw things all her life and couldn’t deal anymore. It’s clear by the next scene Chise’s in

a bad place, she frightened by these dark creatures that pop up and the fear is channelled to

mean fear of a woman that took her in.

Chise’s fear is causing misunderstandings around shown by the little girl and a mother overworked by two boys as well as a new little girl to take care of. So of course Chise decides to leave trying to find a safe place but finding otherwise.

The last scene was captivating when she’s chased into the forest by No Face (sorry Miyazaki reference, couldn’t help it. She backs into a building which out to be a library.

This scene meeting this magician is a beautiful scene with the sparkling library, Chise’s eyes light up. It’s one of those “you’re a wizard, Harry” moments (sorry again, actually did you notice that magician actually looks like Harry Potter?) It seems very compelling so far and I’m looking forward to how this anime plays out. It’s very much a new world being introduced in the best of ways.

I can't say for sure whether this Ova will play after the anime or in between. In any case, they do not contribute to the main plot.

However, these 3 Ova episodes surpass the anime in quality, both in terms of presentation, narration, and animation.

The story mostly tells events from Chise's past and one of her greatest experiences at the time, which wasn't that bad at all, I found this relatively interesting. The atmosphere was also right here.

In contrast to the anime series, it was again made clear how great the danger is of seeing the shadows of the magic world and how fatal it could be for people to have eye contact with them. Unfortunately, it has been neglected too much in the series, almost forgetting the topic.

To be honest, I find the Ova quite recommendable in contrast to the series, unfortunately, one lacks the context for it. So, unfortunately, you have to see the anime to understand everything.