The Adventures of Peter Pan 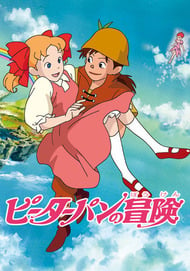 Wendy, John and Michael are three children who live a boring life in London, but their dreams are far more interesting: in them, they watch a flying boy called Peter Pan battle the scary pirate Captain Hook. Though their mother has not heard of such a boy, the children soon discover that he is very real – but only to children. Alongside Peter and his fairy friend Tink, the trio flies away with Peter to Neverland – a place where you never grow old and each day is filled with fun and games. Alongside the Lost Boys, jealous mermaids, and a cast of other playful characters, Wendy, John and Michael will have many adventures and go up against not only Captain Hook and his gang, but also a cantankerous old crocodile!

StoryI dedicate this review to my five-year old cousin, Adotey. Were it not for his funny way of mumbling Peter Pan no Bouken's opening theme in a made-up language, and the fact that having him beside me reminded me of when I first watched this show at his age, my motivation to review it would have died quickly. The legendary hero Peter Pan whisks three English children, Wendy, John, and Michael Darling, to a magical place called Neverland. They fly there using the power of fairy dust. Unfortunately, once they touch down on Neverland, things deviate drastically from J.M. Barrie's original narrative to incorporate endless episodes of filler. Let me backtrack a bit here. Peter Pan as told by Barrie is my second favourite book of all time; no matter how grown-up I may be, I can't help ranking it above more accomplished literary classics for the sense of wonder it arouses. Nonetheless, even the most comprehensive edition in bold print would struggle to make that feeling last more than two-hundred pages. Disney comfortably made a feature-length movie out of it by amending some of the detail, but to drag it out across forty-one episodes could only take the most heinous act of bastardisation. To an adult, Peter Pan no Bouken represents Chinese torture of the most innocent kind - it's repetitive, utterly devoid of peril, and brimming with sugary cliche. Wendy, Michael, or some other child gets into trouble with Captain Hook's crew, Peter Pan saves them using his gift of flight and some deft swordplay, and everyone returns safely home to do it all again tomorrow! For a child, however, the story may look quite different. Cousin Adotey can't understand Japanese and has too weak English skills to read the subtitles, but damn me he watched the whole thing! When he grew bored or tired, he could easily pull himself away from the middle of an episode and return to it the next day without missing a thing. Yes, you heard me - he came back for more. That is the strongest evidence I have that this show has any entertainment value.AnimationI've watched several World Masterpiece Theatre classics as a child and also revisited one or two as an adult to refresh my memory. Peter Pan no Bouken ranks roughly on par with them in animation quality. Clean lines, smooth motion, plain character designs, and understated but adequately detailed backgrounds combine to create a homely, unobtrusive viewing experience. It's the visual equivalent of opening a Dickens novel or maybe something even more unthreatening like Enid Blyton. It's certainly nothing like the novel Peter Pan because, in contrast to this flavourless fare by Nippon Animation, Barrie's Neverland feels immersive even as he leaves some detail to his readers' imagination.SoundFirstly, the show offers upbeat, sentimental pop opening and ending themes that wouldn't sound out of place bookending a magical girl series. Then, inbetween, there are the banal 'Casio keyboard' background noises. Together they amount to an immemorable, inoffensive sundtrack that just about functions.Characters"Peter Pan, I've got you this time!" "Ha ha! I foiled your nasty plan, old man!" "Damn you! Smee, get this crocodile off my scent!" The above is a condensed paraphrase of the hammed up dialogue that takes place throughout the plot. As any discerning reader can see, there is little in it that hints at deep, interesting personalities. While the characters appear human in looks, beneath they're just cliches. I should mention that familiarity with them has a lot to do with their banality. Almost anyone growing up in the West will know what to expect from the cast of a Peter Pan production - a series of forty-one episodes would have to squeeze out some miraculous new dimensions from these established characters to keep an audience's interest. Needless to say, Peter Pan no Bouken fails to do this.OverallFor very young children, Peter Pan no Bouken is probably entertaining on an ad hoc basis (only the most braindead tot would watch more than two episodes at a time). They'll like the pirates, the magical creatures, and the fact that Peter Pan flies around like a spastic squirrel. Grown-ups should stick to the excellent original novel told with Barrie's distinctly ironic voice, or reminisce on their own childhood with Disney's shorter and much better-looking adaptation.

This is a variation of the famous, homonymous children’s story. As a retelling it was interesting; but it failed to prove itself better or even equal with the original. ART & SOUND SECTIONS: 6/10 Nothing special, but still bearable. It took me a long time to get used to the characters’ appearance, as the animators paid no attention to how they looked in the book. The general portrayal of everything and everyone in Neverland is darker and more dangerous than normal. The action scenes are nicely done, with fluid movement and scary traps filling the screen. Although it seems as if everyone can die at anytime, there is hardly any on-screen bloodshed or death. The voice acting was mediocre but the music themes ranged from wacky to grim, giving a nice boost in the atmosphere. STORY & CHARACTER SECTIONS: 7/10 It helps to have knowledge of what happens in the book. As normal, Peter Pan is an adventurous boy, who takes Wendy and her siblings to the magical Neverland, where they face the same adventures of the book (pirates, Indians, fairies, etc) but with a higher level of difficulty. Plus, unlike in the book, the kids can’t return home and are stuck there for good. On the surface, the characters are as adorable as in the book. Peter Pan is a magical, flying, danger-seeking boy, Wendy is a mother figure for the orphans, and captain Hook is an obsessed, evil pirate who wants to kill Peter. The story is the same, until mid-way, where it takes a totally new path. Here, Peter tries to protect a girl from an evil witch, who aims to make her the next heir to the Throne Of Evil. Captain Hook becomes a minor villain and the story gets a lot darker and scarier. Although this twist was a good thing, the several subliminal messages of the book were left out completely, turning the series into an average children’s adventure. VALUE SECTION: 2/10 The hidden meaning in the original book was the refusal to grow old and responsible (it was presented in an excellent way in the movie Hook, starring Robin Williams). Neverland is our childhood that we wish it could last forever (that’s why time is frozen there), Peter Pan is the kid inside us, that prefers to play games instead of taking responsibilities from grown-ups, Wendy is our biological clock that spurs us to raise a family, Hook is our fear of growing old, the ticking crocodile that chases him is time that goes away and steals our vitality (represented as Hook’s eaten limbs), and so on, and so on… With all these not present in the story, everything simply feels as another superficial battle between good and evil. ENJOYMENT SECTION: 5.5/10 Nice try but shallow result. VERDICT: 6/10 The accused is found … GUILTY! … of using plagiarism for disguising a mediocre title.