The 8th Son? Are You Kidding Me? - Reviews 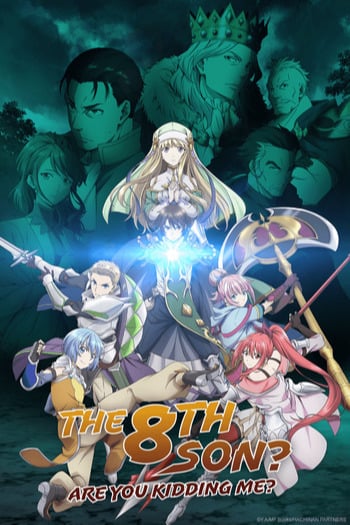 It's really hard for us, hardcore isekai fans to defend the genre when shows like this get an adaptation. It would hurt nobody if it stayed in the abyss of mangaland with its fanbase but they had to bring it to animeland. As a manga reader I can tell you this show is bad and it doesn't get better. It's like a different version of Kenja no Majo.

The premise as usual with those stories is interesting. You have an mc that gets isekai'd in a medieval fantasyland but with a twist. He enters the body of the 5 years old child of a lowly noble family somewhere in the countryside. From this point you have 2 options. The generic one or the creative one. I'm sure you know by now which one the author chose.

For the sake of it let's imagine the creative scenario. MC retained all his memories of the past and is now in this forsaken place. He then slowly starts to learn more about the world, cultures, and trade. Since he's a salary man he could even create a trading companies or manage his estate to make it prosper. Either way we would see a good worldbuilding with a somewhat op mc but just because he's smarter. He would win with guts and intellect and you can even give him some magic.

The lazy way which the author chose : Make mc super OP at birth and have some dude wander in a forest close by and make that dude somehow sense the mc's power and make him teach the mc all his magic because reasons. Then kill off that character and make the mc cry with some sad music to create fake empathy. Oh and let the MC remember how to make wasabi from his previous life and for the rest of the time let him act like a brat because why not. This story shouldn't even be an isekai, at least it wouldn't be added to the long list of trash isekai out there. He is just isekai for the sake of it. I'm 100% sure the author made him an isekai character just because it's trendy. What's the point of being an Isekai mc if it doesn't serve any purpose at all?

The sound in horrendous. What's with this voice acting and weird sound effects? Everything sounds so cheap and generic. It even felt like the sound was off sometimes it was irritating.

All the characters without exception are boring. I usually like emotionless mcs but this one has just a punchable face. Did I mention that he didn't even have any goal at all? Like how you would look for ways to go back or at least try to understand how you arrived in that world since he wasn't summoned. But that's just brushed off by the author.

I feel like this is a big middle finger to us. They are saying "here your isekai story. Look the mc is super powerful you like that don't you? And look how everyone admires him, don't you wanna be like him? Check out all these chicks around him, see how cool and amazing he is". I'm seriously annoyed because I really love isekai man but that's just too much. I had to let it out.

And this f*$ù/ur doesn't have ANY will of his own. None whatsoever. It's infuriating.

If you want to read good isekai, check out the manwha/manhua, they are at least somewhat better than this.

He's a Gary Stu. He's a self-insert isekai protagonist who is OP because the creator decided he should be and no other reason. There are so many other isekai anime that do "OP protagonist in a new world" better. You're getting nothing new from watching this anime. I have no understanding of what his personality is like 4 episodes in because most of the time it's people interacting around him and him just being pushed around or ordered to do something that somehow lands him all the power, titles, respect, money without him putting in any sign of real effort, because even his training was off-screen.

I wanted him to interact with his brothers and see what life as a younger son was like. Nope.

How about seeing how nobility interact and play politics to subtely maneuver the political and social circles? Not yet.

I wanted him to train to learn about his powers and effective use of magic and the dangers involed. Nada.

I wanted him to genuinely earn the trust of his party members or befriend them one at a time with us seeing why they belong in his party and as the main characters other than they're strong and round out the combat types and personality tropes. Zip.

Maybe the romance will prove something worthy of my investment, but I doubt it.

I'll keep watching this show because hate-watching something is sometimes entertaining. It's at least a good contrast to actual good isekai shows airing right now. A good reminder about how good they are because without them we'd be stuck with only shows like 8th Son.

If you've seen a bad isekai in the past, you will already have seen everything you need to have seen. The animation is extremely choppy and they're clearly cutting corners at every opportunity. This would be acceptable if the story and characters were even remotely interesting, but they're not. This is an extremely bland power fantasy and the main character has literally no drive of his own. There is quite literally nothing interesting about him, and he achieves nothing at all while everything he could possibly want is just handed to him, be it money, nobility titles, and women.

I have seen a few bad reviews, but honestly... I liked this anime. Sure some parts were stupid, but the moment to moment dialogue and interactions were pleasant to watch. There is ALOT, a freaking boat-load of awful anime out there. This one, is much better than those. This one has pretty cliche characters, but it was still fun to watch. The point of this show is not the action or the story, but rather the character developement. However, I did feel like they were trying to fit too much in at once.

All in all, definitely worth watching. Don't listen to the haters, make up your own mind by watching the first episode.

I read the light novel for a while and what I enjoyed from it was the depth and detail the writer puts into his story, it’s that detail that raised it above the tidal wave of generic isekai stories.

This anime adaption fails to maintain what made the novel different and instead falls at every hurdle into mediocracy. The main character has all his personality stripped from him, side characters are reduced to caricatures of architypes, with the meticulous detail that raised the novel above others in its genre thrown out the window for seemingly no other reason than rushing through the story to get to the perceived interesting fights/bits (even though without the context and character depth each scene feels hollow and lacking).

If you’re interested in the series read a translation of the novels, you’ll enjoy it 100 times more than watching the anime. If you’re looking for an isekai anime to kill some hours in lockdown then I'd strongly recommend giving this one a miss, there are tons of great Isekai out there (despite the long list of mediocre to bad ones) that are much more deserving of attention than this one.

My recommendations for other isekai to watch instead would be Shield Hero, Overlord, That Time I Got Reincarnated as a Slime and since it’s sequel was just announced Inuyasha.