That Time I Got Reincarnated as a Slime - Videos 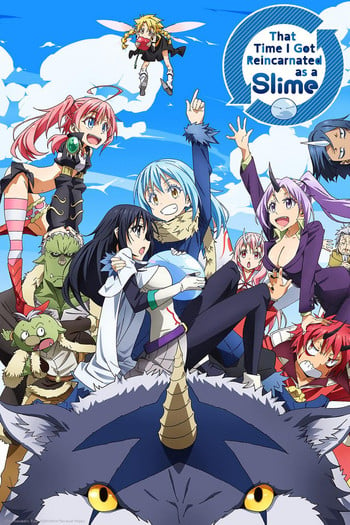 When Shizu was still with Demon Lord Leon, it was a Hero who rescued her. That Hero was Shizu's inspiration to help as many people as she could for many years. She even worked as a teacher for children who'd come from other worlds. And now, as her time comes to an end, Shizu asks Rimuru for one last favor...

Battle at the Goblin Village

In the Kingdom of the Dwarves

Attack of the Ogres

The Gears Spin Out of Control

Anime-Planet users recommend these anime for fans of That Time I Got Reincarnated as a Slime. All available to watch right here, right now!

Both of them have a MC that is overpowered AF. Both of them were human but are not anymore. Both of the MC rule over others that are also powerful. Although Overlord is a dude going into a game and this is about a guy dying and reincarnating in another world.

Both of these feature a human MC who becomes an OP monster in another world, after which they start building a country / expanding their influence using their human intelligence and a number of strong servants.

it is very interesting to see how the mc becomes strong from zero and also the story is not like the the other isekai anime it is a new story with a great plot. hope u checkout my recommendation(sorry for grammer mistakes)

They have similar premises. MC is an average human that somehow gets sent to a fantasy world and somehow gets overpowered. They are both at least a bit kind and prefer peace.

They're pretty similiar game world mechanics plus I always like MC who have OP trumpcards and the ensuing reactions of the people around them.