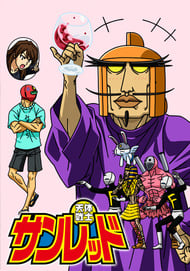 The battle between good and evil wages on in the town of Kawasaki! Sunred, a sarcastic, cranky hero often battles the forces of Florsheim, an evil organization out to achieve world domination! But for  General Vamp and the rest of the Florsheim gang, attaining such a goal won’t be easy. Between helping Sunred move, deciding how to throw out a used frying pan, disputing over stolen ramen and recruiting new members, there’s never a quiet moment in Kawasaki!

StoryEvery so often I stumble upon an anime that infects my consciousness with its bizarre humour and leaves me maniacally giggling to myself long after I’ve finished watching. The latest series to achieve this is Tentai Senshi Sunred. Set in the city of Kawasaki, the series documents the ongoing battle between its resident hero, Sunred, and Vamp, the leader of an evil organisation working towards world domination. Sounds a bit dull, doesn’t it? Luckily, Tentai Senshi Sunred parodies the superhero genre and instead delivers antagonists that don’t antagonise, monsters that could barely scare a small child, and a hero who just cannot be bothered. The series revels in turning every clichéd character on its mask-covered head, and plays brilliantly on this idea to create one of the craziest and most hilarious anime to ever grace my screen. With a straightforward concept, simplicity is the series’ greatest asset. Instead of including dozens of bizarre scenarios and hoping to appear wacky, Tentai Senshi Sunred takes more of a relaxed, slice-of-life approach and places its characters in everyday situations. This uncomplicated idea evokes greater humour by balancing the extraordinary with the mundane. For me, watching Vamp attempt to use his new cell phone is more riotous than if he were piloting a giant mecha made entirely of ice cream. The series’ casual attitude towards heroes and monsters alike enhances its laid back tone, and I often got caught up in its momentum. No one seems to bat an eyelid if a monster works at a convenience store or a superhero in full costume wanders down the street – and after a while, neither did I. By getting caught up in this nonchalance, a sudden realisation of the situation’s absurdity often occurs. This allows Tentai Senshi Sunred’s primary joke to remain funny for twenty-six episodes without becoming stale.AnimationTentai Senshi Sunred’s simplistic visual appearance fits well with the overall tone of the series. The vibrant colour palette and bold lines nicely complement the jovial nature of the show. Little actual animation appears in the series. Lip synching is pretty much non-existent, with alternative methods employed – such as vertical movement of the head – in order to demonstrate which character is speaking. Also, there is often a deficiency of in-betweens resulting in snappy movement. However, I feel this is a conscious decision rather than the product of a restricted budget, since the abrupt movement fits well with the show’s pace, and the different expressions of speech serve to boost the comedic style.SoundTentai Senshi Sunred’s opening and ending themes perfectly reflect the series’ tone. The opening replicates the style of theme song expected from any Power Rangers-esque show and, with its suitably corny lyrics, serves to add to the series’ humorous content. Meanwhile the ending duly highlights the series’ random aspect (I know I certainly wasn’t expecting a song about eating chicken casserole), which cannot help but raise a smile out of sheer disbelief. The splendid voice acting displayed in the series enhances the comedy throughout. From the exaggerated and strained vocals of Khamenman to Usa’s adorably child-like voice, it is difficult for me to find fault with Tentai Senshi Sunred’s seiyuu.CharactersTentai Senshi Sunred presents a cast of extremely amiable characters with personalities that never match their roles. From Sunred whose apathy and propensity for lecturing Florsheim make him the sort of anti-hero that is difficult to hate, to the conscientious and polite Vamp, who is more like a housewife than an evil mastermind. Meanwhile Vamp’s endless legions of monsters are more akin to mild-mannered salary men than bloodthirsty creatures of darkness. Each character has their own gimmick that allows them to stand out from the others. While generally a negative point for any anime, this actually works in Tentai Senshi Sunred’s favour by creating a colourful cast to match an equally colourful series. Though the reversal of expected character traits offers comedy on its own, the principal source of humour in Tentai Senshi Sunred comes from the interaction between its characters. In particular the relationship between Vamp and Sunred provides endless entertainment. It often seems like Sunred views Vamp as an annoying younger brother: he may not want him around but he always comes out to play – I mean fight – when asked. Likewise the exchanges between the Florsheim monsters left me sniggering, particularly at their petty squabbles over stolen ramen and tales of holiday woe.OverallComedy is an extremely difficult thing to get right and by its subjective nature, may not be to everyone’s tastes. For me though, Tentai Senshi Sunred pushes all the right buttons. The amusing parodic element, mixed with an appropriate visual style and superb sound design, makes this series one of the best comedies I’ve seen to date. Fans of random humour should check this series out if they haven’t already. As for me, I’m off to try some of ‘Vamp’s Quick Cooking’ and contemplate the passive nature of pastries. 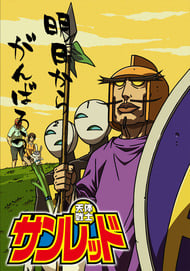 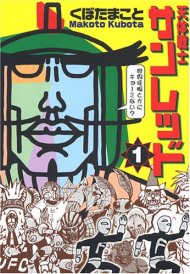