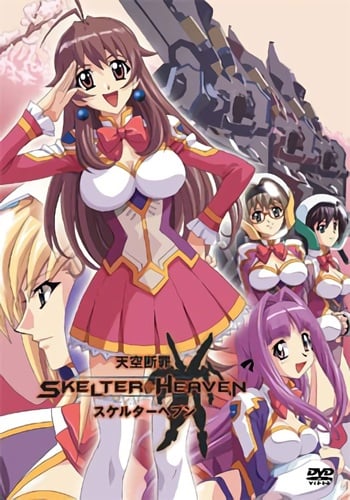 What happens when you take Neon Genesis Evangelion, crack in several episodes of Geneshaft and add a liberal sprinkling of poorly created computerised graphics? Out of the bastardised mix pops a confused mess that calls itself Skelter+Heaven. Rearing its ugly sci-fi head, the series revels shamelessly in a clichéd and bewildering plot, before dying slowly and painfully with no-one to mourn its passing.

From a promising opening set in a gorgeous futuristic cityscape, the story takes a nosedive as the characters hustle onscreen. There is no introduction to the girls undergoing rigorous combative training or even why they are fighting - only a superficial half-minute newscast talking about the NGE style angel floating above Tokyo.

Setting a sketchy military scene, the odious dialogue between the feisty Rei and boyish Otsuya is soon buried in a comical commotion. Hilarity ensues as two busty young girls are strapped into undulating seats, moaning sensually as they are monitored by scientists. With no account for this erotic training technique, the squad is called to arms and mount their shoddy looking mech fighters to battle an unknown enemy. A sudden barrage of attempted back-story gives each kamikaze pilot a lacklustre personality, but detracts from Skelter+Heaven’s life-blood – the animated killing machines. With impetuous jumps and twists in the story, a trite script provides nothing but laughter in what was surely meant to be the epic and emotionally charged climax of the show.

Left with a look of confusion on my face, I am still not entirely sure how to explain the plot. As a disappointing theme throughout the brief show, valuable time is wasted with pointless fan-service, and too much is squeezed into too little time. The 18 minute OVA subsequently becomes a jumbled mess of incoherency for people who have not experienced the Playstation game – even then I’m not convinced the show will be more than mediocre.

Poorly proportioned characters and crudely blended CG give Skelter+Heaven an inadequate feel, especially considering comparable shows from 2004. The robotic vessels have more of a Lego look to them, rather than the appearance of an advanced mechanised vehicle. Fight scenes consist of awkwardly choreographed bar brawls and mech seem to stumble around, falling into battle rather than deftly dispatching a horrendously animated enemy.

One thing I hate in Japanese music is the use of English lyrics, and the opening track proudly blasts out Engrish translations that make little sense, even by the ususal bewildering standards of J-pop. With an entire soundtrack blatantly snatched from a computer game, the midi sounding harmony is barely tolerable. Unfortunately, the voice acting fares no better. A Z-list cast of seiyuu struggle their way through a terrible script and sound wooden even to an untrained ear.

With a lack of regard shown to the story, the characters also feel rushed and almost added as an afterthought. A hasty roll-call has too many forgettable names and faces crammed into a short amount of screen time, with no background and no explanation for their erratic behaviour. I’m still not sure which of the girls I could call the main protagonist, or who I should sympathise with, but I can honestly say I don’t care.

Summing up Skelter+Heaven in one word would be easy – amateurish. From the substandard computer graphics, to the impetuous and gabbled storyline, nothing impressed me. Maybe playing the game would have given me a better chance of understanding the bizzarity unfolding onscreen, but as it stands, this show was a disappointing hodgepodge of plagiarised ideas and feeble character that should never have found its way onto my watching list.

Story: What the shit is this fuck. I do not even fucking know. I don't even know where to begin on this buffalo dump. The "plot"? The inconsistency? The random ass "Fanservice" moments? The animation? The sound? The characters I don't give a rat's fuzzy ass about? The "romantic vomit-inducing subplot"? EVERYTHING ABOUT THIS SHIT IS FUCKING SHIT. EVERY. FUCKING. THING-

Fucking A... let me start again, with sanity. Who made this agai-

Shit. You know what else they shat out? School City Valanoir.

That should suffice for story.

But in it's defense-

I got nothing. The dialogue is simply terrible, not even narmy bad, just... terrible. The scenes are slapped together with random ass fanservice thrown in for shits and giggles which have nothing at all- NOTHING in the slightest to do with any of this... Giant Squid punching, because giant mecha are made for punching giant monsters in the face. Why is Squidward there? Why did he come to earth to rumble against a bunch of created chicks? Why should you give three shits about it? The answers are: Don't know, don't care, and no shits are given.

Oh, wait, there is backstory. It's just slapped on with no lead up or context. And the most random ass fucking flashbacks that have zero fucking relation to what just happened prior. I am so close to weeping in confusion and pure hatred for this shit. This is so fucking ass shit that I cannot continue the plo- oh god I'm going to throw up.

Forgot the girls in their animation contrasting with the CGI mecha and it's gnarly ass tearing shit stream. I think I might be dying after rewatching it. This is like the ring, except with more girls and this... thing they call CGI. If you saw it in motion, it would be hard to disagree.

Sound: OP: Race the Sun to get back your lost dreams? Wait, lyrics are meaningless, why should I waste my time with this trash? But gratuitous English isn't gratuitous enough. Other music? Why not. VO? I... can't remember. Certainly the best part, which is the equivalent of polishing a turd.

Characters: Oh god. I do not have the words to explain the characters. Words cannot describe them, they should have sent a poet.

Overall: Ranks as one of the worst shits I've ever had the misfortune of seeing. While it had... well, whatever I thought was slightly tolerable that was possibly mentioned above, everything else was shit. The plot was a mess, the dialogue was crap, the romantic subplot was as romantic as Diabolik Douchefucks except less douchey, the backstory was tacked on and pointless, you care for the characters as much as you do for all those douchebag vampires from Diabolik Douchefucks (Cheap shots for either one), the animation... oh dear god the CGI... mixed with the girls...

Notable quotes from our traumatized viewers:

"they used so much CGI, but all their characters were still one dimensional" - fancyfajita "

"is there a spin-off game of this where i can get these girls naked?" -mespia

"everything can be explained by 'bc they're creeps!' " - fancyfajita

"honestly, you don't understand how symbolic the ending is. moral of the story: when the world is in danger, don't even bother bc the guy doesn't love u back and the giant squids will just multiply and come back a year later" - meeshmint

This anime was a hot mess. How hard is it to make all the subtitles the same font, man? Also if the thumbnail doesn't scar you, then you have more balls than the other male mc whose name doesn't even deserve to be remembered.

Let us end this with a haiku:

the girls are AI

Clearly written by a guy 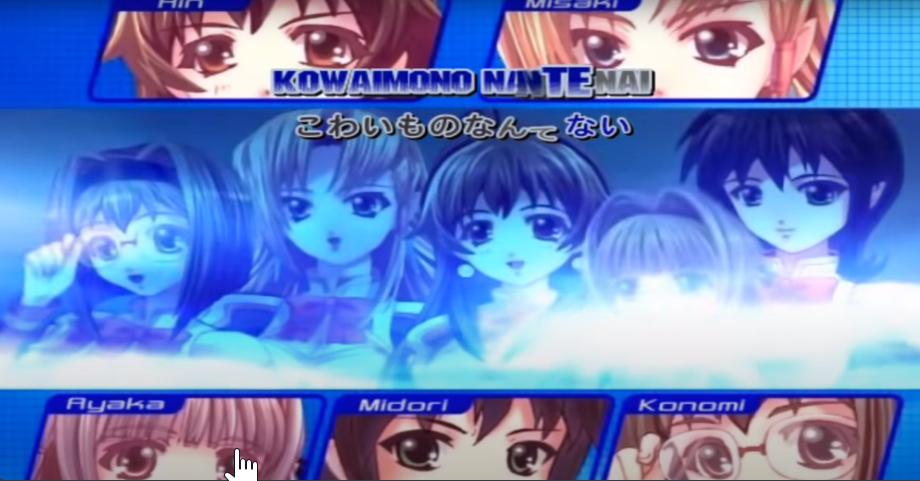 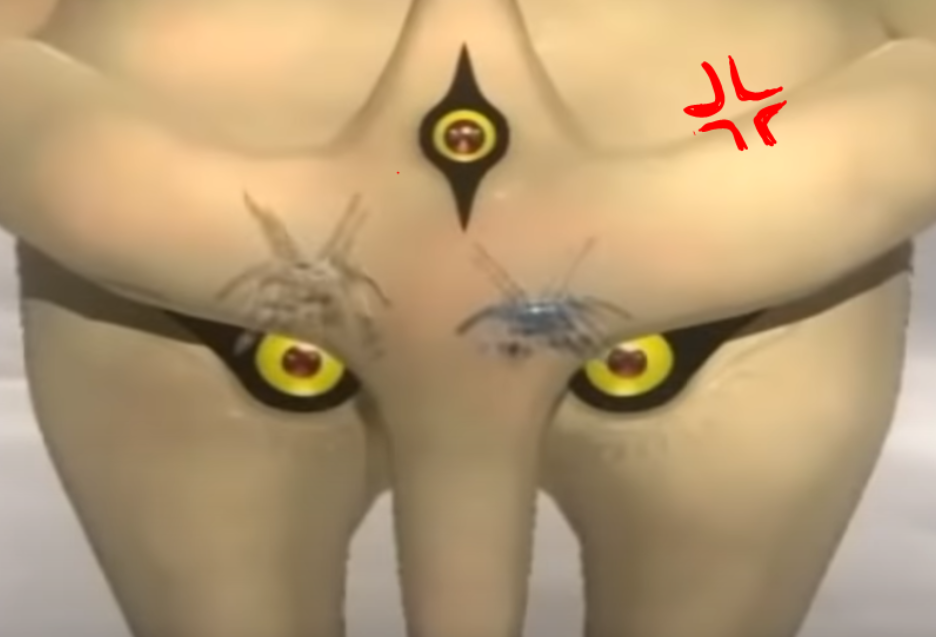 **disclaimer: we are not responsible for any damages incurred from watching this anime as a result of reading this review.**

Excuse my language, but fuck this. It's not even anime, it is not intended for entertainment. Nothing is explained, nothing makes sense. Everything is terrible. I went into this knowing it was the worst reviewed anime on the website, and it somehow exceeded my expectations in the worst way possible

Giant ass floating alien squid that practically has no animation appeared in Japan. Who better to stop it than a bunch of chicks in awfully rendered 3D flying mechs? Spoiler alert: anybody. This isn't even explained well, there's no development of any kind, and every character either has a really whiny generic anime girl personality or they are just stone cold with no emotions whatsoever. There are also random shots that make no sense, like theres two girls tied to chairs that move up and down as I guess a punishment for fighting, but they seem like they're really enjoying it if you catch my drift. No reason for that to be there. Why? Why the hell does any of this exist???

My favorite part was when they didn't want to animate one of the 3D models so the "animation team" just moved the asset downward on the screen.

Terrible, and I mean the worst I've ever heard, voice acting aside, the sound mixing was horrendous. I actually had a headache after about five minutes and had to take a break. The sound effects are just terrible, and the way it's mixed is less than a 13 year old Soundcloud EDM artist could mix in Audacity in ten minutes. The OP is also awful.

How in God's name did anyone actually sign a contract to voice these characters? The dialogue is so cringeworthy, and the voice acting is really bad. The characters have no redeeming qualities whatsoever.

I hope everyone that was associated with this in any way pays for the sins they committed against humanity.

this anime is better than boku no pico and gianni antetokoubo