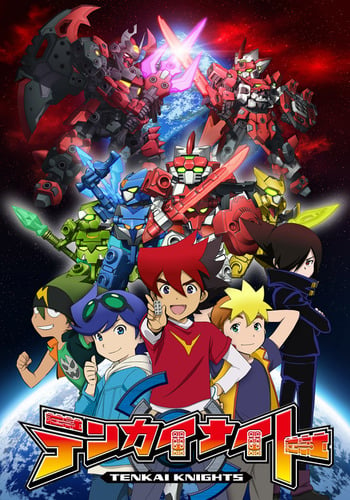 Touno Hikari, Inamura Airi, Unazuki Nao, Marie Vlaanderan, Tanakura Masao and Izumizaki Nana are six would-be pilots attending the robot training institute in Hokkaido. With the goal of gaining a robot license, the competition is fierce and the training is grueling in all kinds of weather conditions. But amidst the lighthearted teamwork, a great danger approaches Earth, and only the secret mecha Dinagiga and its x-genes-wielding pilots can destroy it! Only one question remains... who will be the pilot?!

The Dancouga team prepares for its final showdown with their arch-enemy Zorbados. The team has to travel to the strange dimension of the alien invaders to once and for all save the earth. Fighting on the home-grounds of the enemy will take all their strength and cunning. The Dancouga will have to fight its way to the strange alien red dimension before it can start its final assault and assure the safety of mankind forever.

Marin Reigan lost his father and his home when Gattler staged a coup, forcing their people to abandon their dying planet and invade another. Seeking vengeance, Marin pursued. But when he saw the world they planned to invade, Marin found a new mission: to protect the untarnished skies and seas of that blue planet, Earth! The battle will not be easy. Marin's technology is the only thing that can stand against Gattler's forces. But the Earthlings are not quick to trust him, and the ruthless enemy commander Aphrodia is hungry for vengeance of her own. Can Marin gain the Earthlings' trust, avenge his father, and stop the war?

In the year 2050, a violent earthquake on the moon spontaneously changed the moon’s atmosphere and gravity, making it habitable for humans to live upon. Fifty years later, the young Daichi Haruka heads to the moon for summer vacation; he wants to try out his newly created Jetboard, but he wants even more to catch a glimpse of the rabbit person recently spotted in the desert. After running across a little girl with furry ears and her like-bodied grandmother V-May, Daichi finds himself in the middle of a grand adventure! With the help of the giant mecha Granzort, his new companions and two other children, Daichi will help put a stop to an evil monster race that is dead set on controlling the universe!

"Are you there?" This is the question that the aliens always demand before they attack. The quiet island of Tatsumiyajima is secretly the last line of defense against mysterious invaders. In a quiet and rustic villiage, children were raised without any knowlege that they were born to pilot the Fafnirs, giant robotic war machines of terrible powers that are the only thing that can defend all they hold dear.These children's struggles will be the only thing that can hold off an enemy that attacks both our bodies and our sense of identity...