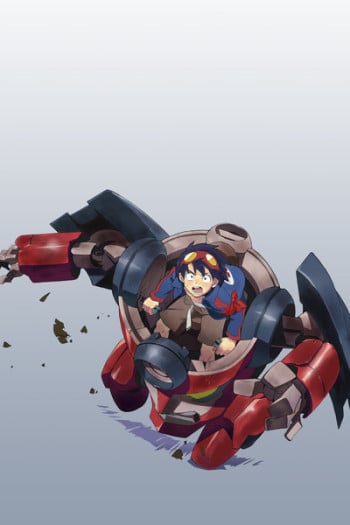 If you're looking for anime similar to Tengen Toppa Gurren Lagann OVA, you might like these titles.

From the dark reaches of space an evil energy being called Draias seeks to invade the earth, following Draias the space police borrow the advance rescue vehicles and android constructed by Dr. Amano along with three civilian vehicles the space police lead by Figh bird (taking on the name Katori, the android named by Dr. Amano) transform the vehicles into massive mecha to face off against Draias and his men to protect the earth from his evil invasion.

Evil aliens known as the Boazanians have invaded Earth, easily defeating all of its conventional military defenses. However, all is not lost: Japan has been secretly developing a mighty weapon – the powerful robot known as Voltes V! This massive mecha is made up of five combat vehicles, three of which are piloted by the sons of Voltes V's inventor; and when the evil Boazanians attack, the five vehicles combine to crush the invaders’ newest evil plot while using their mighty laser sword to slice the enemy robots in two!

In the distant future, far from the time of the great war and defeat of the alien invaders, the original Getter Robo team is back and continuing the fight against evil. The world is in ashes, and the invaders are back and in full control. Using their powerful transforming Getter Robots, the team's mission is twofold: to vanquish the robotic army of invaders and to discover the mystery behind Shin Dragon, the artifact left behind by Dr. Saotome, the now dead inventor of the Getter Robot; or IS he?

Deep in the recesses of space, the powers of good and evil are in a constant battle for the cosmos. Earth has remained out of the struggle until now, when the Geisters – evil energy lifeforms – invade the planet and search out host bodies and treasures to steal. Luckily for humanity there’s hope – the energy lifeform Exkaiser of the Space Police descends to the planet and inhabits the family car of young Kouta!  With luck, Exkaiser and other transforming robots will help put a stop to the Geisters and save mankind!

The Brave Command Dagwon: The Boy with Crystal Eyes

Continuation of The Brave Command Dagwon.

En, Kai, Shin, Yoku and Ryu were five ordinary students at Sankai High School - that is, until the alien Brave Seijin forced them to become the heroes known as Dagwon to defend planet Earth! Aliens from the space prison Sargasso have targeted the world, and since there's no time to summon Dagwon from the aliens' home planet, the duty falls upon these five unassuming teens. With newfound mecha power and animalistic machines, Dagwon will defend Earth from mummifying monsters, giant ants, and more!

The invaders came without warning, conquering Earth and turning many, including Kento, into an orphan. The year is 1995, and Kento and his friends now live a destitute life, stealing food and steering clear of the mysterious alien tower that looms near their village. But when the gang happens upon an underground cave, they discover Doctor Earl's secret base, futuristic technology, and even a giant mecha! Kento must take his place in the cockpit and defend the planet from the evil Akron race - but little does he know the truth about his heritage, and what that means to the war.